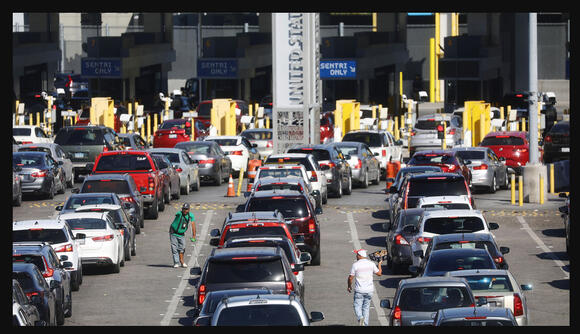 On Monday, border agents expected a flood of traffic to come through southern border points following a 20-month closure due to the pandemic, but things were relatively quiet.

Officials in the Mexican border city of Tijuana said: "people did not make the most of restrictions being lifted along the 2,000-mile (3,200-km) border due to fears of being caught in traffic and the new restrictions of vaccinations for entry."

Javier Delgado, a Tijuana transport official, told Reuters there was "about 35% less traffic than expected on the city's border with San Diego, one of the busiest borders in the world."

Mexico's foreign ministry said, "The border flow is expected to increase over the weekend and progressively as the holidays approach and starting with Black Friday."

Rules over coronavirus vaccines have also been a deterrent for legal travel to the U.S.

Some inoculated Mexicans will be prevented from entering the U.S. because they received vaccines in Mexico that have not been approved by the World Health Organization, such as China's CanSino and Russia's SputnikV. The vaccines must be FDA or WHO-approved to qualify for entry.

"I never imagined that because I got the CanSino vaccine, I wouldn't be able to cross," Donato Suarez, a driver at a private university in Tijuana, told Reuters.

The U.S. will accept FDA- and WHO-approved vaccines. The U.S. Border and Customs webpage stated that the following vaccines are acceptable:

Foreign air travelers will need to show valid proof of being fully vaccinated against COVID-19 before boarding their flight bound for the United States. They must also submit a negative test result within three days of departure.