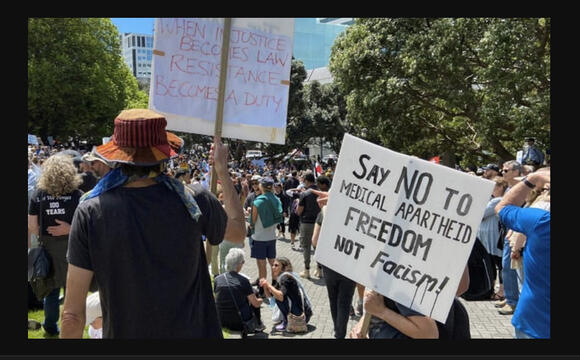 The country's parliament building, known as the Beehive, has been closed. All non-essential personnel has been sent home as a mixture of masked and unmasked protesters walk through central Wellington and around the parliament.

Demonstrations have been reported as peaceful so far. Signs against government mandates were also seen alongside anti-media posters, inferring that the media was working with the government to lie to the people.

New Zealand, like many countries, has struggled to fight the spread of COVID-19 and variants, forcing intermitted lockdowns and vaccine mandates which have been met with an almost even number of supporters and opponents.

Ardern, the New Zealand Prime Minister, said, "the country will require teachers and workers in the health and disability sectors to be fully vaccinated against COVID-19." Many other countries, like the U.S., China, Australia, and Russia, are also taking this stance on requiring people across sectors to vaccinate to work.

New Zealand is among the lowest COVID-19 cases in the world, with under 8,000 cases and 32 deaths. The Daily Mail reported that " 125 new cases on Tuesday and its total double-dose vaccination rate had reached nearly 80% of its eligible population."

Just last year, at her election victory speech, Prime Minister Jacinda Ardern delivered said, "We are living in an increasingly polarised world," she said. "A place where more and more have lost the ability to see one another's point of view. I hope that with this election, New Zealand has shown that this is not who we are."

Hopefully, she will be able to rally people around those words and unify the majority around her plan to address the COVID-19 pandemic with less pushback.