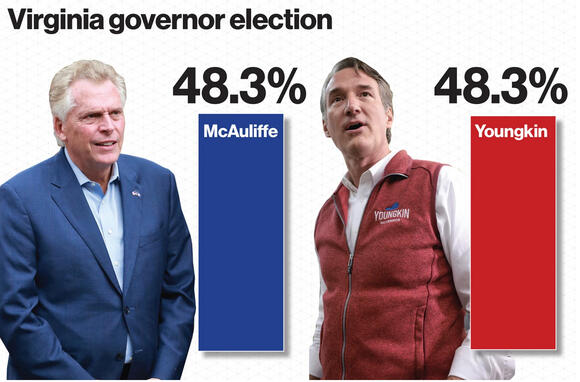 President Biden will travel to Virginia Tuesday to promote Democratic gubernatorial candidate Terry McAuliffe. It's a real sign of how closely the White House is watching this race.

Vice President Kamala Harris has already been to Virginia to raise funds and promote the Democrat candidate and plans to return for a final desperate push.

McAuliffe, a former governor, ex-chairman of the Democratic National Committee, and longtime Clinton family lieutenant, is tied with Republican Glenn Youngkin in polls.

President Biden carried it by a comfortable ten percentage point lead in the 2020 Presidental Election in the state of Virginia, but things have changed. The state of Virginia has seen pushback on the vaccine mandate and an increase in the cost of living, making the Democrat Governor's popularity slump. President Biden's poll numbers have also started to slip since the failed Afghanistan withdrawal and his lack of ability to recover 16 kidnapped Americans, including children, from Haiti.

The gubernatorial elections in Virginia and New Jersey could hurt Biden’s already sinking political momentum in DC as he seeks to forge a Democratic consensus for a social spending bill that leftist House members say must pass before a vote on a $1.2 trillion Senate-passed infrastructure bill.