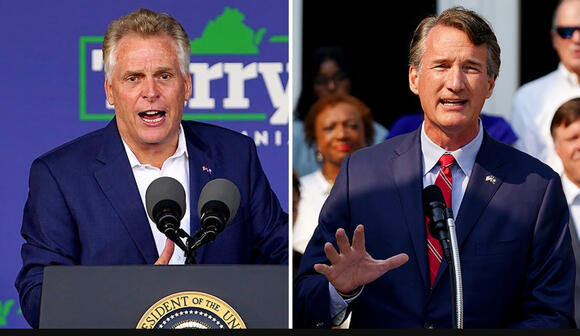 A few months ago, Virginia Governor Terry McAuliffe could have comfortably taken a second term. However, President Biden’s approval ratings have fallen after the Afghanistan withdrawal, an ongoing supply chain issue, immigration crisis, kidnapped Americans, and unpopular vaccine mandates. Jessica Taylor, Editor for The Cook Political Report, told Fox News, "Complacency driven by what’s happening in Washington and with the Biden administration is the biggest threat to McAuliffe and is the driving reason why we moved the race to a toss-up last week."

These events have created another close race for McAuliffe and a chance at politics for Youngkin.

The Democrat nominee for Virginia Governor is Terry McAuliffe. He's held the post for one term, but even that win was very tight. McAuliffe is closely connected to the Clintons and is popular amongst Democrats. The Republican nominee Glenn Youngkin is a businessman running for public office for the first time. He aligns with conservative moderates and supported Donald Trump during his presidency.

There is a 50-50 Senate and GOP (between the two parties), which means that Vice President-elect Kamala Harris holds the tie-breaking vote - for now. This year elections in Virginia and New Jersey could be predictors for the 2022 midterm elections and indicate which party might control the House and Senate, up for grabs as more 2022 state elections occur.