Science has contributed significantly to our understanding of microbial pathogens. Although we can debate at length about what would constitute the most significant advance in the field of microbial pathogenesis, for me, there are a few that stand out. One of these discoveries was that some bacteria build an intricate molecular structure that resembles a needle and sits on the cell exterior (Reviewed in Galán & Collmer, 1999). Transmission Electron Microscopy of structures isolated from gram-negative bacteria revealed the presence of a needle-like apparatus for which its function was initially unknown. 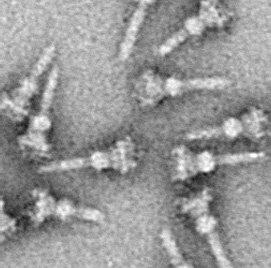 Subsequent studies have firmly demonstrated that when you remove the genes that these structures require for their assembly from pathogens, they become much less able to incite disease (Alfano et al., 1996). The loss of virulence phenotype applies to both animal and plant pathogens, suggesting that these needle-like structures carry out a fundamental role in pathogenesis.

Indeed elegant studies have shown that these 'nanotubes' help deliver proteins into host cells by acting like a real molecular needle that can puncture the host cell membrane and injects proteins into the cell interior. From this, it became evident that pathogens have a real stake in manipulating the host (Alfano et al., 1996; Hensel et al., 1996). After all, microbes maintain a substantial gene repertoire required for the production of these elaborate structures, which must come with an immense cost. The benefit, therefore, must be significant such that it can offset the costs. The benefit, as it turns out, is the ability to suppress host immunity and prevent the creation of those toxic environments that are detrimental to the pathogen. In fact, more evidence is emerging that pathogens (and other microbes that can interact with hosts) have found ways to increase the flux of nutrients to infection sites, creating an even more favourable environment to grow and reproduce.

At this stage, it is appropriate for anyone to question whether the occurrence of molecular machines also applies to eukaryote pathogens. The answer to this question is yes! Nearly all pathogenic organisms studied to date appear to form structures that facilitate interaction with their host(s). As you can imagine, however, these organelles (or in some cases, organs!) are wildly diverse, reflecting their independent emergence and evolution across lineages. For clarity, I present an overview below.

So, what is the take-home message here? The crucial piece of information to remember here is that pathogens and pests (no matter which ones you talk about) have found some way to access and inject their molecules into the host cell. In evolutionary terms, pathogens and parasites have found it easier to limit a physical and chemical onslaught, rather than face its full force, during an invasion. The question then, of course, is: How have plants adapted and coped with pathogens when faced with all this molecular innovation? The fact that plants are still around and thrive in their environment, tells us that they must have found ways to deal with pathogen threats.

This is exactly what future articles will be about.

If you enjoyed reading this article, read more on this topic here, here and here.