DutchtownSTL provides news, resources, and information for the South Side neighborhoods of St. Louis, including Dutchtown, Gravois Park, Mount Pleasant, Marine Villa, and Cherokee Street. Find out about events, development, programs, and more. 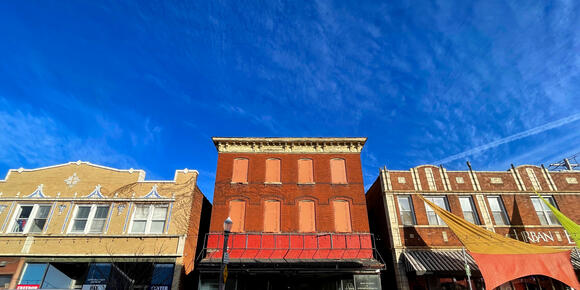 What Does the Marquette Homes Project Entail?

The Marquette Homes project includes 14 buildings and lots throughout Dutchtown and Gravois Park. The scattered-site development will add over 54,000 square feet of new and rehabbed residential space to the neighborhood, including ten one-bedroom apartments, 14 two-bedroom units, and 36 three-bedroom spaces.

Most importantly, the new units will add new affordable housing in Dutchtown. To qualify for rental, applicants must earn 60% or less of the area median income. Some units will be set aside for tenants earning below 30% of the local median income.

“We always try to do the most good with the resources we are given,” says Chris Shearman, Executive Director of Lutheran Development Group. As such, Lutheran aims to tackle especially challenging properties that will provide the greatest impact upon their transformation. New construction will rise on five long-vacant lots, and nine severely deteriorated buildings will see extensive rehabilitation.

How Is the Marquette Homes Project Funded?

The primary funding source for the $16.5 million Marquette Homes project is the sale of federal and state Low Income Housing Tax Credits (LIHTC). The project will also be financed via Historic Tax Credits, funding from the City of St. Louis, and a loan that will be paid through future rents.

“The need for affordable housing is so great, yet the resources are limited,” says Lutheran Development Group Executive Director Chris Shearman. Securing the LIHTC funds was no easy task. The State of Missouri left the program unfunded for several years, and even when credits are available, the process is highly competitive. Lutheran Development Group pursued the credits for five years before finally winning the award at the end of 2021.

Where Are the Properties?

The Marquette Homes project includes 14 properties located in Gravois Park and in the northern portion of Dutchtown concentrated around Marquette Park.

All of the included empty lots are currently owned by the City of St. Louis Land Reutilization Authority, as are a few of the extant buildings. Three of the vacant lots are located on Tennessee Avenue in the Keystone Place subdivision, an early 2000s attempt to introduce new single-family construction in Gravois Park that fizzled with the 2008 housing crash.

Properties to be rehabbed include multifamily buildings on South Compton Avenue, Minnesota Avenue, Louisiana Avenue, and Chippewa Street. The early 20th century buildings are representative of the sturdy brick architecture found throughout Dutchtown, but most of the properties are boarded up and in dire need of major repairs.

Perhaps the most transformative part of the project will be the rehab of the mixed-use building at 3305 Meramec Street. Located in the heart of Downtown Dutchtown, the three-story behemoth has been vacant for nearly 15 years. In addition to several apartments, the street-level commercial space will also be returned to use.

Prior to the Marquette Homes project, Lutheran Development Group demonstrated success in Dutchtown with the Chippewa Park project, another scattered site development that rehabbed 15 vacant buildings and delivered 46 new affordable housing units. Upon completion of the project, Lutheran moved their headquarters to the newly rehabbed mixed-use building at Chippewa Street and Minnesota Avenue. Across the street, their Rooted Property Management division set up shop in another building rehabbed as part of the Chippewa Park project.

Lutheran also developed the East Fox Homes project in Fox Park and Tower Grove East. In addition to the Marquette Homes project, Lutheran Development Group will be making their first foray into the North Side with the Baden School Apartments project, a rehab of a former school building in the Baden neighborhood.

More About the Marquette Homes Project

You can read more about Lutheran Development Group's Marquette Homes project in Dutchtown at DutchtownSTL.org.

DutchtownSTL provides news, resources, and information for the South Side neighborhoods of St. Louis, including Dutchtown, Gravois Park, Mount Pleasant, Marine Villa, and Cherokee Street. Find out about events, development, programs, and more.