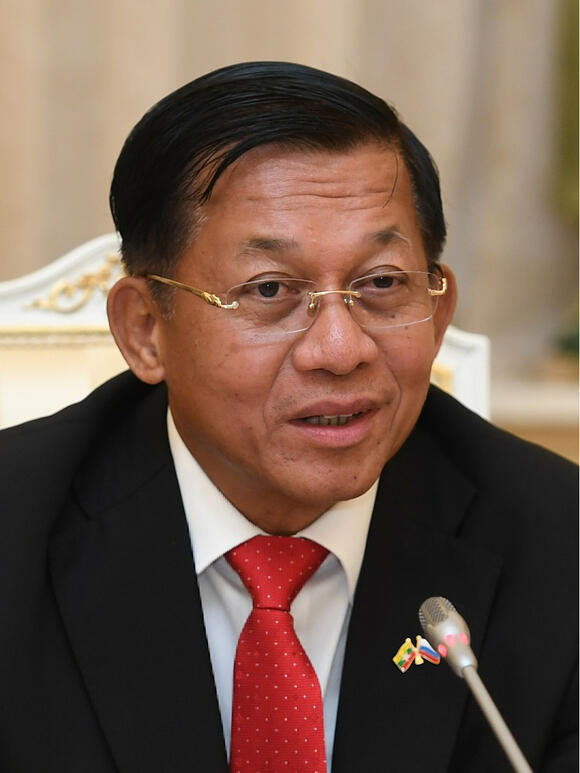 Min Aung Hlaing, Myanmar’s Commander-in-chief of the armed forces and current leader of the countryMikhail Frolov on Wikimedia Commons

The ruling military junta of Myanmar has executed four prisoners in the first use of capital punishment by the country in more than three decades. Among the men executed are rapper and former lawmaker Phyo Zeya Thaw, as well as the democracy activist Kyaw Min Yu. In January they were sentenced to death following closed trials in which they were accused of conspiring to commit terror acts in the country. Despite the executions already being carried out, and the families of the deceased having the right to their bodies for burial, officials at the prison have refused to hand over the body of Kyaw Min Yu.

The executions follow more than a year of repression and violence in Myanmar after armed forces of the country (officially called the Tatmadaw) detained State Counsellor Aung San Suu Kyi, President Win Myint, as well as other government leaders in order to restore the ruling military junta. Since then, the country has been ruled by Min Aung Hlaing, Myanmar’s Commander-in-chief of the armed forces. Since then, what has followed has been a long series of crimes against humanity to solidify rule over the country. Tactics by the government have included brutal crackdowns on the opposition, arbitrary arrests of those committing acts of protest, torture, sexual violence, and mass killings.

Worse still has been the atrocities committed against Rohingya Muslims that the Myanmar military has been accused of committing. The amount of death, destruction, and systematic attempts to remove the Rohingya Muslims as a people within the country falls well within the definition of genocide based on the UN Convention on the Prevention and Punishment of the Crime of Genocide.

Given all these widespread acts of violence to keep control over the country, we can likely expect that these won’t be the last executions of opposition figures carried out by the regime.

President Vladimir Putin of RussiaPresidential Executive Office of Russia. The referendums on whether to request annexation into Russia have begun in Ukraine. In the east, voters will supposedly go to the polls to determine the future of Donetsk and Luhansk, while those in the south will have a similar say for the Russian-held areas of Kerson and Zaporizhia. In total, eighteen percent of Ukraine's territory might be lost to Russia if the referendums go the way they have been predicted.

Despite facing significant military setbacks in Ukraine over the past few weeks, Putin and Russia clearly refuse to be deterred in their efforts to seize control over at least part of their neighbor. As such, Russia has decided to throw their support behind the referendums announced by the Russian-occupied, self-proclaimed Luhansk People's Republic (LPR) and the Donetsk People's Republic (DPR). The voting on these referendums will occur between September 23 and September 27. Russian-installed officials in the occupied region of Kherson have also signaled support for a referendum on their future as well.

Ethereum CoinImage by Satheesh Sankaran from Pixabay. One of the most important criticisms of the adoption of cryptocurrency has been the energy costs associated with it. Given that there were almost 19,000 different cryptocurrencies this year, with a market capitalization of about $1.75 trillion (roughly the gross domestic product of Italy), the energy consumption associated with them is massive. Bitcoin alone currently consumes an estimated 150 terawatt-hours of electricity per year, which is more than the entire country of Argentina, which has a population of 45 million people. That consumption translates into 65 megatons of carbon dioxide released into Earth's atmosphere. Given so many concerns about climate change, that is not a negligible number, and it has been harming many people's perception of cryptocurrency.

Vladimir Nikolayevich SungorkinFHMRUSSIA on Wikimedia Commons. Following the initial Russian invasion of Ukraine earlier this year, there has been a wave of Russian oligarchs that have died under mysterious circumstances. The latest of these deaths occurred only yesterday, September 14th, when Vladimir Nikolayevich Sungorkin, the Editor-in-chief of the Russian state newspaper Komsomolskaya Pravda, supposedly suffered a stroke and suffocated on his way to a lunch. An important ally of President Vladimir Putin, it is possible that this latest death was simply the result of the stroke and not instigated by someone else. The same might be said for others in this list of 13 oligarchs as well.

Despite Major Setbacks In Ukraine, Several Countries Have Stepped Up To Help Putin

President Vladimir Putin of RussiaPresidential Executive Office of Russia. Things have not been going well for President Vladimir Putin and the Russian forces deployed in Ukraine. Over the past month, Ukrainian forces have retaken control over thousands of miles of territory and liberated more than 300 villages from Russian forces. Over this past week, an opportunistic counterattack changed into a rapid advance that broke through Russian defenses near Kharkiv, leading to the recapture of a number of important cities in eastern Ukraine, including Izium and Kupyansk. These two cities in particular were being used by Russian forces as logistical hubs to supply their military in Ukraine. There loss is a major blow to any Russian effort to halt, let along push back, the Ukrainian advance.

This saturday from 10:15 am until 11:45 am there will be a special, free art tour of the Dallas Museum of Art, presented by Robert Kelleman. The founder and director of the non-profit community organizations Dallas-Texas History & Culture, as well as Washington DC History & Culture,

A man passes by a destroyed tank on the main street of Edaga Hamus, in the Tigray region, in Ethiopia, on June 5, 2021. (Yan Boechat/VOA)Yan Boechat/VOA. Following a breakout in fighting along the Tigray region border in Ethiopia a little more than a week ago, the five-month ceasefire between the central government and rebels has ended. According to the Ethiopian government and the local population, fighting took place around the town of Kobo, located in the north of Ethiopia. Since then, the Tigrayan People's Liberation Front (TPLF) forces have again started advancing south, which have led to armed clashes and a reported minimum of two new strikes by the Ethiopian Air Force on Mekele, the capital of the Tigray region. Both sides have accused the other as having violated the ceasefire first.

President Vladimir Putin of RussiaPresidential Executive Office of Russia. At President Putin's orders, Russia has halted gas supplies to Europe via the Nord Stream 1 pipeline. Though Putin has claimed that this halt is a result of the punitive economic sanctions imposed by the West on Russia for its invasion of Ukraine, it is clear to many that this is an effort to force Europe to drop the sanctions against his country.

On Tuesday of this week, the White House announced that Russia could be in the process of buying "literally millions" of artillery shells and rockets from North Korea. That being said, White House national security spokesperson John Kirby stated not long after this announcement that there were "no indications that that purchase has been completed and certainly no indications that those weapons are being used inside Ukraine." While that is true for the moment, if the purchase is completed and the armaments delivered into Russian hands, it stands to reason that these new military assets would likely be delivered to the frontlines in a expansion in support for the invading forces.

Monkeypox in US Approaching 20,000 Cases

Following the mass resignation of ministers from his government in July of this year, Prime Minister Boris Johnson announced that he would be resigning as leader of the Conservative Party. The recent leadership election has seen Liz Truss selected as his successor within the party following six weeks of campaigning where she faced off against Rishi Sunak. She will begin her new role as the new Prime Minister of the United Kingdom as of tomorrow, September 6th. The first set of tasks she will be tackling include forming her government and to dive into a range of issues plaguing the country, namely the cost of living crisis, an upsurge in the price of energy, and continuing to set policy regarding the war in Ukraine.

President Alexander Lukashenko of BelarusPresidential Executive Office of Russia. President Alexander Lukashenko of Belarus announced today that the SU-24 warplanes utilized by the Belarusian military have now been modified to carry nuclear weapons. Moreover, he has warned that Minsk would react to any attempts by the West to cause it problems. The effort to modernise the SU-24 warplanes to be able to carry these kinds of weapons comes despite the lack of Belarusian control over any nuclear weapons. That being said, in a previous meeting with President Putin on June 25, it was made clear that "within several months" Russia would be transferring Iskander-M missiles (capable of carrying both conventional and nuclear warheads) to Belarus at the same time that the upgrading of Belarusian warplanes would be occurring. If Russia ends up deciding to provide nuclear weapons to Belarus as well, the nuclear balance in Europe would shift and the risk of a potential clash between NATO and Russia would increase.

President Vladimir Putin of RussiaPresidential Executive Office of Russia. President Vladimir Putin of Russia has signed a presidential degree signaling his continued commitment to the war occurring in Ukraine. According to the document, the total size of the armed forces of Russia will be increased this coming year from 1.9 million personnel to 2.04 million. This overall increase includes an additional 137,000 increase to combat personnel to a total of 1.15 million.

Russian Gazprom Cuts off Gas to Latvia, With More Actions Likely to Follow

Today Gazprom, the major Russian state energy company, has officially suspended its gas supplies to Latvia. Though Gazprom officially justifies the business move by accusing Latvia of violating the conditions that it previously agreed to in order to purchase gas, there has been no details released sharing what these violations actually are.

View of Beirut, LebanonYoniw at Wikimedia CommonsSince the deadly blast two years ago at the port of Beirut wiped out 85% of the wheat silo reserves of Lebanon, the Middle Eastern country has been at a greater risk of suffering a hit to its stability should the supply of wheat coming into the country become interrupted. For the leaders of Lebanon, the Ukraine War is such a nightmare scenario.

Russia has announced that it will be ending its participation with the International Space Station after 2024 and will instead devote its resources to the creation of its own orbiting space station. The announcement comes from Yuri Borisov, the CEO of Roscosmos the Russian state space agency, as the tensions between Russia and the West continue to heat up over the war in Ukraine and the way Russia has been using energy, food, and destruction as tools in support of their war efforts.

In response to President Putin’s heavy-handed threats to reduce the Russian gas supply to Europe leading into the cold winter months, the governments of the European Union have reached a deal to ration natural gas this winter to protect themselves and their citizens.

With potential famine looming over a number of countries as a result of the war in Ukraine inhibiting grain exports from ports in the Black Sea, the agreement reached yesterday between Russia and Ukraine that was brokered by the UN and Turkey was quickly hailed as a triumph of diplomacy to help prevent disaster elsewhere in the world.