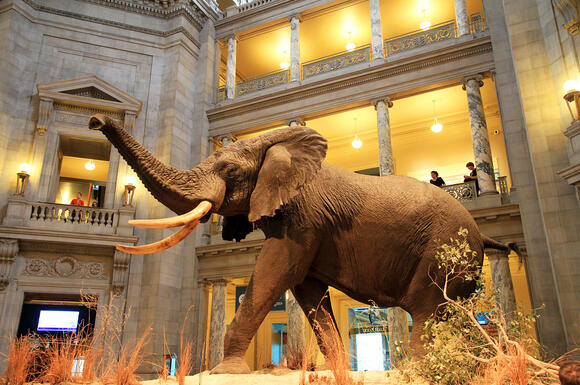 Tonight from 6:00-7:30pm EDT, the Smithsonian National Museum of Natural History will be hosting a Panel Discussion titled “Digital Futurism: Evening One”, the first of two panels to be held at the Martin Luther King Jr. Memorial Library that features presentations and discussions with leaders in history, art, literature, music, journalism and technology who are having impacts on how technology itself develops and how it is being used.

A free event primarily aimed at those aged 18 to 25, the public as a whole is welcome to register to attend the panel featuring:

The panel itself received support from the Smithsonian American Women’s History Initiative, and the topic is tied to the upcoming “Cellphone: Unseen Connections” exhibit at the National Museum of Natural History beginning in 2023.

Russian Gazprom Cuts off Gas to Latvia, With More Actions Likely to Follow

Today Gazprom, the major Russian state energy company, has officially suspended its gas supplies to Latvia. Though Gazprom officially justifies the business move by accusing Latvia of violating the conditions that it previously agreed to in order to purchase gas, there has been no details released sharing what these violations actually are.

View of Beirut, LebanonYoniw at Wikimedia CommonsSince the deadly blast two years ago at the port of Beirut wiped out 85% of the wheat silo reserves of Lebanon, the Middle Eastern country has been at a greater risk of suffering a hit to its stability should the supply of wheat coming into the country become interrupted. For the leaders of Lebanon, the Ukraine War is such a nightmare scenario.

In response to President Putin’s heavy-handed threats to reduce the Russian gas supply to Europe leading into the cold winter months, the governments of the European Union have reached a deal to ration natural gas this winter to protect themselves and their citizens.

Min Aung Hlaing, Myanmar’s Commander-in-chief of the armed forces and current leader of the countryMikhail Frolov on Wikimedia Commons. The ruling military junta of Myanmar has executed four prisoners in the first use of capital punishment by the country in more than three decades. Among the men executed are rapper and former lawmaker Phyo Zeya Thaw, as well as the democracy activist Kyaw Min Yu. In January they were sentenced to death following closed trials in which they were accused of conspiring to commit terror acts in the country. Despite the executions already being carried out, and the families of the deceased having the right to their bodies for burial, officials at the prison have refused to hand over the body of Kyaw Min Yu.

With potential famine looming over a number of countries as a result of the war in Ukraine inhibiting grain exports from ports in the Black Sea, the agreement reached yesterday between Russia and Ukraine that was brokered by the UN and Turkey was quickly hailed as a triumph of diplomacy to help prevent disaster elsewhere in the world.

Territory of Ukraine in color of their flagElionas from Pixabay. On the surface there are many similarities between Russia and Ukraine that can justify why the former has in the past tried to keep the latter in its political orbit. Both share Russian as a language, media popular in Russia has also been popular in Ukraine, there many families who live and work across both countries, and Russia itself had invested billions of dollars into Ukraine before the invasion. However, this barely scratches the surface as to the many reasons why President Putin of Russia pursued an invasion of Ukraine earlier this year. In the paragraphs to follow you will get a sense for the many reasons that Russia would want to annex their neighbor that, when examined altogether, perhaps indicate that an invasion was a question of “when” and not “if” given the increasingly tightening of ties between Ukraine and the West.

At the age of 35, An An the Giant Panda has passed away. Born in 1986 in Sichuan, China, he originally lived in the Wolong National Nature Reserve before being sent to the Ocean Park in March of 1999. A gift from the government in Beijing to Hong Kong alongside a female Giant Panda by the name of Jia Jia, An An was a long term draw at the theme park. At the time of his passing, An An was the oldest male Giant Panda being taken care of by humans.

For some time now, Russia has been directing disinformation at African states regarding the looming food crisis sparked by their invasion of Ukraine. The core of the message is that Western sanctions against Russia are the source of these coming shortages, and that it is Ukraine which has been deliberately destroying its own grain supplies. Essentially, Russia is weaponizing hunger.

Vladimir Putin meeting with Sergei Lavrov and Sergei ShoiguRussia Presidential Press and Information OfficeSergey Lavrov, Russia’s Foreign Minister, has announced that his country’s military goals in Ukraine have expanded beyond the original aim of the eastern Donbas region to include other territories that Russian forces have been contesting in the eastern and southern parts of the country.

Speaker of the House Nancy Pelosi at LBJ Library in 2022Brian Birzer. After the Financial Times stated that US House of Representatives Speaker Nancy Pelosi would be visiting Taiwan this coming month, the Chinese government warned that it would take ‘forceful measures’ if the visit happened. These measures include military but also strategic consequences for Taiwan, especially as the Chinese government has become increasingly confrontational in recent months.

Piles of British 20 pound notesPublicDomainPictures at Pixabay. According to estimates, the consumer price index in the United Kingdom has risen to 9.4% annually, hitting a new 40-year record high. According to the United Kingdom’s Office for National Statistics, the most important contributors to this rising inflation rate are motor vehicle fuels and food.

Russian President Vladimir Putin has announced that the flow of Russian natural gas to European buyers has gone down due to the West's own actions, and that further decreases in supply might continue. This latest statement by President Putin has increased concerns throughout the European Union that a cut off of the gas supply would lead to political and economic havoc across Europe in the coming winter months. As such, the European Union has begun the process of creating emergency plans to reduce their overall gas demands in the coming months, with the hope that greater cuts now will allow for building up reserves for the cold winter months should Russia follow through in cutting off deliveries.

While the Ukraine War continues in Eastern Europe, and the West continues to help Ukraine resist Russia’s invasion and atrocities, those in the EU have some cause for celebration as accession negotiations to integrate North Macedonia and Albania have begun. As of last Tuesday, negotiations on the accession process began in Brussels, with European Commission President Ursula von der Leyen telling reporters that the people of both Albania and North Macedonia deserve it, and that all of the European Union stands to gain when both are eventually welcomed in as full members. That being said, the road to accession has not been easy for either state.

Vaccine vial with maskcromaconceptovisual from Pixabay. Today the US House Select Subcommittee on the Coronavirus Crisis meets to discuss the many and varied impacts that Long Covid can have, which will be supported with input from the perspectives of several experts. It has already been established that Long Covid has impacted millions of Americans over the course of the pandemic. The long-term health impacts have impacted the daily lives of many (as high as 1 in 5 adults) and even forced many of the worst affected (as high as 1 million workers) out of the workforce altogether while they try to manage the lingering health effects of the virus. This is not a surprise given the types of long-term symptoms associated with Long Covid, such as pervasive fatigue, shortness of breath, cognitive disfunction akin to ‘brain fog’, and even chronic pain.

View of a family farm in the morningBertsz from PixabayToday the US House Committee on Oversight and Reform is meeting to discuss the role of farmers and ranchers in regenerative agriculture practices, with the stance that they are of essential importance to address issues of climate change and increasing food production needs. Climate change is a core threat to the country’s food supply in a variety of ways, as extreme weather events, pests, and water scarcity all detrimentally impact crop yields and can turn farmland unusable by farmers. The emphasis at the meeting of the Committee on implementing greater regenerative agriculture practices in the country, whether they be as simple as rotating crops or other steps to improve soil fertility, shows that the Federal government takes these concerns very seriously.

1972 Picture of first two giant pandas (Ling-Ling and Hsing-Hsing) gifted to the Zoo from ChinaSmithsonian's National Zoo and Conservation Biology Institute. While April 15th marked the official 50th anniversary of the arrival of Ling-Ling and Hsing Hsing at the Smithsonian's National Zoo and Conservation Biology Institute, the summer celebration of giant pandas continues with a number of fun events. Special events include:

The Russian invasion of Ukraine has dragged on for months now and President Putin has been additional steps to further the war effort, such as by subordinating his economy to the Russian war machine, as well as quelling potential sources of internal dissent against 'the special military operation'. Worse still is how Russia has engaged in rhetoric in which it has signaled it might turn its military against other neighboring states as well, such as when the Russian Duma considered revoking Lithuania's independence or threatened that the restrictions levied against trains to Kaliningrad would lead to actions to protect Russia's national interests.

Russian Defense Minister Sergei Shoigu during a meeting with President Vladimir PutinPresidential Executive Office of Russia. The Russian Defense Minister, Sergei Shoigu, has ordered all Russian military forces deployed to Ukraine to expand their operations in order to challenge Ukrainian forces launching strikes into the occupied eastern region and other territories that Russia has seized. Defense Minister Shoigu issues these instructions in part to reduce the ability of Ukraine forces from launching artillery and rocket strikes against the general population, settlements, and civilian infrastructure in the occupied regions.

Dnipro locals stand by a big crater left by a missile impactReuters via BBC News. At least three people have been killed and a further fifteen injured in the latest Russian missile attack on the Ukrainian city of Dnipro this past Friday.Regional Governor Valentyn Reznychenko said on his Facebook page that the rockets launched by Russia had struck an industrial plant and the busy street next to it, but that the extent of the destruction was still being determined. What is known already, however, is that one of the casualties had been a city bus driver who had just finished his work day, leaving two children to grow up without a father.