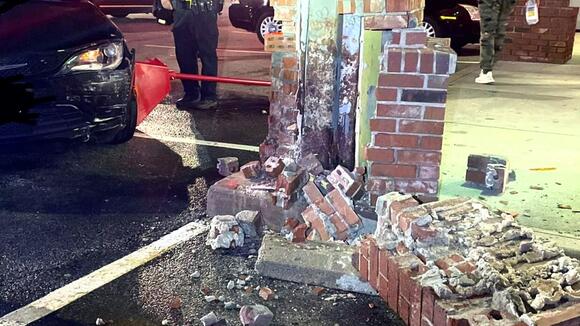 (WHITMAN, MA) On Tuesday, November 29, 2022, the Whitman Police Department revealed in a Facebook post that a car accident had taken place on Bedford Street, which involved a storefront.

The Whitman Police Department has announced that this crash resulted in "NO injuries" and that there was a "building inspector on scene" who was able "to cleared the business to reopen. " They added that, "the affected area will be roped off with caution tape and cones."

"At approximately 5pm a car struck the building causing damage to one of the support columns. Whitman Police & Fire Departments are on scene. The building/business has been shut down temporarily until the safety of the structure can be determined. NO injuries reported. Building inspector on scene." - Whitman Police Department

This crash occurred one week after the Plymouth County area experienced a similar vehicle and storefront disaster. On November 21st, Hingham, another town within Plymouth County, underwent a tragedy when a "2019 Toyota 4Runner, crashed through the front glass of the Apple Store", which "left one man dead" and "seriously injured multiple others" who were shopping inside the popular store.

(BOSTON, MASSACHUSETTS) A local Boston museum has announced they are hosting a Lunar New Year celebration that will include family-friendly activities, children's crafts, and more! The best part about this community celebration? You can 'pay-what-you-wish' to attend!

(KINGSTON, MASSACHUSETTS) "This is seriously going to be epic," stated 4GoodVibes in a recent Facebook post that revealed big news for the largest handmade gift shop in Massachusetts, located inside the Kingston Collection on the South Shore.

(BOSTON, MASSACHUSETTS) Johnny Cupcakes, a creative clothing brand founded on the South Shore in 2001, has revealed exciting news about its Newbury Street location!. Johnny Cupcakes is a bakery-themed t-shirt shop with cupcake-themed merchandise. The flagship location immerses visitors in the experience by inviting them to enter the "frosting-scented retail store through a giant vintage oven." When a customer makes a purchase, their t-shirt is even served to them "out of a smoking vintage oven."

4 Fun Ways To Celebrate Galentine's Day On The South Shore

Celebrate the gals in your life by attending a fun Galentine's Day celebration with your best friends!Photo byDESIGNECOLOGISTonUnsplash. (PLYMOUTH COUNTY, MASSACHUSETTS) It may not be an "official" holiday, but that doesn't mean you shouldn't celebrate it! Galentine's Day has become an unofficial yearly celebration of the gal pals in your life who you love and appreciate.

(BOSTON, MASSACHUSETTS) The LEGO Group has announced the exciting news that they have chosen Boston as its future headquarters location! Skip Kodak, President of the LEGO Group in the Americas, revealed the reason for the move by complimenting the community. “Boston is ranked one of the best cities in the world to attract and retain talent. This, along with its world-class academic institutions, skilled workforce and great quality of life makes it an ideal location for our US head office."

(KINGSTON, MASSACHUSETTS) For parents on the South Shore looking for a unique and fun day with their child, check out the Mommy & Me, Daddy & Me, Parent-Child Hair Day Experience! Hosted by a local barbershop, this one-hour event will educate the parent on hair techniques and best practices while the child has a fun "spa" day with mom or dad!

(MASSACHUSETTS) Calling all veterans, service members, or family members of either form throughout New England who love photography! You're invited to submit an original photograph to be considered for publication in a photography book that will be published as a paperback book.

(PLYMOUTH COUNTY, MASSACHUSETTS) Valentine's Day is a day to celebrate love, whether it's self-love, the special someone in your life, or your family! If you live on the South Shore and are looking for unique way to celebrate Valentine's Day, check out these fun events... number six might surprise you!

Music, Face Painting & More: You're Invited To The First-Ever 'Someone Special Dance'!

(EAST BRIDGEWATER, MASSACHUSETTS) The Old Colony YMCA in East Bridgewater has revealed they are hosting the first ever 'Someone Special Dance'. This celebration, organized by the Sydney Craven Memorial Fund, invites the community to come together and celebrate the ones they love while raising money for the local non-profit.

This Duxbury Farm Invites You To An "Animal Kissing Booth" Valentine's Day Celebration!

(DUXBURY, MASSACHUSETTS) If celebrating Valentine's Day with furry & feathered friends seems like a dream come true, then you won't want to skip this too-adorable-to-miss event! A local farm-turned-educational animal sanctuary on the South Shore has announced an "Animal Kissing Booth" event, and you're invited!

(BOSTON, MASSACHUSETTS) The hit film Everything Everywhere All at Once has captured the attention of both audience and the Academy, helping two Emerson College graduates earn multiple Oscar nominations. The film is a"hilarious and big-hearted sci-fi action adventure about an exhausted Chinese American woman (Michelle Yeoh) who can't seem to finish her taxes."

(HINGHAM, MASSACHUSETTS) Do you enjoy the crisp morning air on your face and the bubbly, sweet taste of mimosa going down your throat? If so, then this is one morning walk you won't want to miss!

This Family-Friendly Day of Fun in Rockland Will Be Doggy-Themed!

(ROCKLAND, MASSACHUSETTS) If you're looking for a pawsome day of family-friendly fun, look no further than the 'Some BUDDY To Love' event happening at a local business in Rockland!

(QUINCY, MASSACHUSETTS) The City of Quincy invites you to a family-friendly event that's free to attend! Quincy's Annual Presidents' Day Winterfest celebration is a day of excitement the entire family will enjoy.

Photo by(Plymouth Police Department / Facebook) (PLYMOUTH, MASSACHUSETTS) It was a big day for some students at Plymouth South High School! On Friday, January 20th, the Plymouth Police Department announced via a Facebook video that the new Plymouth South High School Cruiser had been unveiled to the students who had helped create the unique one-of-a-kind cruiser design!

(STURBRIDGE, MASSACHUSETTS) You're invited to an evening of s'mores, skating, and snowman-building! The Sturbridge Recreation Committee and Sturbridge Fire Department have announced the return of the annual celebration, the Sturbridge Winter Outing. This is a community-favorite festivity you won't want to miss!

(HYANNIS, MASSACHUSETTS) You won't want to miss this family-friendly Lunar New Year Celebration happening in Hyannis on Saturday, January 21st! Hosted by The Arts & Justice Collective as part of their 'House Party' events, this exciting festivity invites you to a full morning of live performances, crafts, games, and more!

(EAST BRIDGEWATER, MASSACHUSETTS) Holmestead Harvest announced the exciting news that they are expanding their SNAP & HIP food box service to now offer delivery!. The local farm-to-table grocery store was able to begin offering the delivery service less than a month after they joined the Massachusetts Healthy Incentives Program (HIP) and began accepting HIP benefits on January 1st. The HIP program benefits families and individuals receiving SNAP (Supplemental Nutrition Assistance Program) benefits, which is 13% of Massachusetts residents, with more than 53% of SNAP participants in families with children.

Tiny & Cute: Meet The Irish Pub That Will Travel To You!

(MASSACHUSETTS) Check out this Massachusetts-based business that has come up with a creative way to have an amazing evening with friends, family, or even co-workers!. How Many People Can Fit Inside The Tiny Irish Pub?