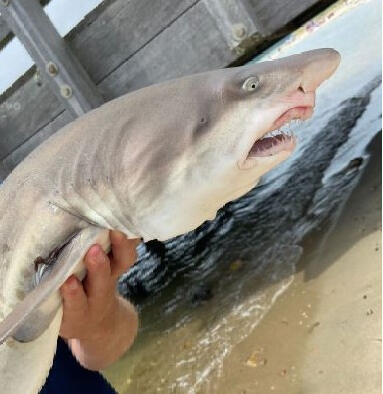 The bridge has become a popular spot for fishing, offering gorgeous views of Duxbury bay and access to the sandy beach. Although a parking sticker is needed to park on the ocean side of Powder Point Bridge, the bay side non-resident parking lot remains open to the public for free. Visitors are encouraged to take a stroll across the 2,200-foot wooden bridge that was constructed in 1892. The bridge includes a raised sidewalk for pedestrians and fishermen.

The Facebook post went on to say the "sand tiger sharks have made a comeback in New England over the last decade, with a large portion of the population found in or around Plymouth/Duxbury Bays."

Duxbury Bay was recently identified as a nursery for young sand tiger sharks. These sharks are known for their low reproductive rates, reproducing 1-2 pups every other year or so. This makes it important that when these sharks are caught by anyone fishing they're handled carefully and immediately released.

Although marine biologists and scientists know "a bit about where the sharks like to hang", they aren't quite sure yet about why these sharks return to specific places year after year!

Researchers have begun using technology to study sand sharks by monitoring their movements in and around Duxbury Bay.

Sand sharks display a scary-looking mouth with teeth protruding in all directions even when their mouth is shut. Despite their clear lack of a good dentist, these sharks are reportedly a docile, non-aggressive species known only to attack humans when bothered first.

Family Fun For Everyone at Starland's Halloween Spooktacular Party

(HANOVER, MA) Calling all "South Shore ghouls and gals, it's time to get spooky!" Starland is hosting a family-friendly party that is sure to provide more treats than tricks! From carnival games to group games, there is fun to be had for every member of the family at this Halloween event.

The YMCA's 45th Annual Corn Festival Was a Successful Fall Day Of Fun!

You're Invited: Uncover Secrets of the Past at Cafe Venice's Thrilling Paranormal Investigation

(Mass Hauntings / Youtube) (NORWOOD, MA) Calling all ghost hunters and thrill seekers! You're invited to a spooky evening investigating paranormal activity. For two nights only event attendees will explore and investigate "Cafe Venice in Norwood Massachusetts, as seen on the show Mass Hauntings!"

(Photo by Charles Parker) The small seaside town of Duxbury is getting into the spooky mood with five festive events happening in October! From trunk or treating to a spooky historical haunted house, there is sure to be something for every member of the family to enjoy!

You're Invited to a Drag Queen Halloween Extraveganza!

(PLYMOUTH, MA) "Get your Halloween weekend going with singing, dancing, a delicious breakfast, yummy mimosas, and a Drag Queen show all in one!" For those looking for a festive and fun way to celebrate, look no further than the Drag Queen Breakfast Halloween Extraveganza!

Carver Haunted House Warns You to "Be Prepared to Be Scared!"

(CARVER, MA) "Brave souls of all ages are welcome to come through at the Creepy Old Fire Station in Carver... but it may be too scary for some of the littlest ones," warns the event details posted on Facebook by the Carver Recreation Committee! The Second Annual Carver Haunted House has been announced, this year taking place for four nights only.

Save Our Bay: Plymouth Rally Planned to Stop "Contaminated Wastewater" Being Dumped into Cape Cod Bay

(PLYMOUTH, MA) If you're concerned about the decommissioning of the Pilgrim Nuclear Plant and the possibility that Holtec may dump contaminated water into Cape Cod Bay then your last chance to speak up at the Nuclear Decommissioning Citizens Advisory Panel will be on Monday, September 26, 2022. This will be the final public hearing planned which will include a public comment period.

Calling All Bookworms! You Won't Want to Miss These 4 Free Author Events Happening in Massachusetts

(Photo by Andrea Piacquadio) (MASSACHUSETTS) As the weather gets colder and we spend more time indoors, it's the perfect time to pick up a good book! If you're looking to explore beyond the pages and get a bit more up close and personal with the authors, then this is for you; check out these four free events happening in Massachusetts- the last one might surprise you!

You're Invited to a Family-Friendly Day of Fun at The 9th Annual Great Pumpkin Run!

(MARSHFIELD, MA) You're invited to a festive day of fun at the 9th Annual Great Pumpkin Run! This family-friendly 5K fundraiser will benefit the Daniel Webster School PTO and will consist of a "flat friendly neighborhood course starting and finishing at the Daniel Webster Elementary School in Marshfield."

This Free Trunk or Treat Event Invites You to Join the Festive Fun in Plymouth!

(Photo by Charles Parker) (PLYMOUTH, MA) The Plymouth Family Resource Center has announced the exciting news that they're hosting a free Trunk or Treat event! The afternoon of festive fun begins at 4 PM and does not require a ticket. This Trunk or Treat event encourages all to dress up in costumes!

(DARTMOUTH, MA) Fairytales will come to life for one night only at The Woodland Fairytale Psychic Fair! Hosted at Rachel's Lakeside in Dartmouth by Grimoire Academy and The Tarot Goddess LLC, this whimsical evening invites you to meet in"the Woodlands for Psychics, Tarot, Fairytale Vibes, and Costume!"

Game of Thrones Weekend at King Richard's Faire: Everything You Need to Know

(CARVER, MA) King Richard's Faire has announced the exciting news that for 2-days only the festive fall fair will become a Game of Thrones themed festival! This "Fandom in the Kingdom" event comes at a perfect time for fans of the franchise; HBO recently released the first five episodes of House of the Dragon, a prequel to the original series Game of Thrones, based on George R.R. Martin's book series.

The Hanover Fire Department has announced the return of their Open House! This community favorite annual event is back after a 2-year hiatus "for public health reasons." The Open House will feature representatives from local first responder organizations, live demonstrations, life safety lessons, and so much more!

(PLYMOUTH, MA) For one night only The Plymouth Family Resource Center (PFRC) is celebrating Halloween with a fun and festive Haunted House! The Plymouth RFC has invited the community to attend their first ever Haunted House which has no admission cost!

(WAREHAM, MA) The Onset Bay Association and Onset-Wareham Fireworks invite you to, "join us for the reimagined Harvest Moon Festival!" This event will include over 50 vendors, food trucks, contests, shows, live music, and more! At the 2022 Onset Beach Harvest Moon Festival, there is sure to be something for every member of the family!

(PLYMOUTH COUNTY, MA) Calling all crafters! Whether you're someone who has never picked up a paint brush or you're someone who loves art with all your heart, you're invited to attend these fun, free crafty events! Hosted at local libraries on the South Shore, these events feature activities for all ages that will get your creative juices flowing!

Save the Date: New England's Largest Zoo is Hosting a Harvest Festival & You're Invited!

(Photo by Charles Parker) (MENDON, MA) Southwick's Zoo has announced the date of its annual Harvest Fest for 2022, this year taking place on Sunday, October 23rd! This fun family event is expected to feature the same exciting and entertaining activities from past years' Harvest Fest, such as live music, local vendors and makers, a craft market, and much more!

(ABINGTON, MA) You're invited to"come together with fellow Moon enthusiasts and curious people worldwide" on the night of Saturday, October 1st to celebrate International Observe the Moon Night at Reilly Field! This event is open to all ages and hopes to inspire others to explore the sky, and specifically, the moon!

New Opportunity Opens For Plymouth Residents: Everything You Need To Know

(Photo by RODNAE Productions) (PLYMOUTH, MA) The Town of Plymouth announced in a recent press release that a volunteer opportunity is currently available on the Visitor Services Board.

(EAST BRIDGEWATER, MA) Plymouth Pride has announced a fun fall event that is sure to get you in a festive mood! Apple picking with Plymouth Pride will take place on Saturday, October 1st- the perfect way to kick off the spooky season! Event participants are instructed to meet "at the apple picking entrance after parking" so that everyone can begin together.