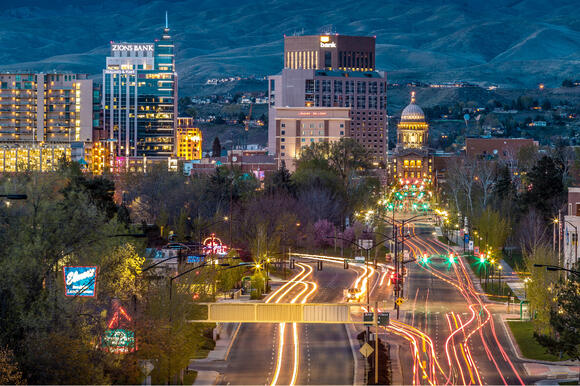 Photo by Alden Skeie on Unsplash

Boise is located on the Boise River in southwestern Idaho, it is 41 miles (66 km) east of the Oregon border and 110 miles (177 km) north of the Nevada border.

Torrie Wilson won the Miss Galaxy competition in 1999, as a fitness competitor. After that, Torrie Wilson was signed by World Championship Wrestling (WCW), where she stayed from 1999 until 2000.

In 2001, Torrie Wilson started to appear on World Wrestling Federation (WWF) television as part of The Invasion (by WCW, of the [then-] WWF) storyline.

Torrie Wilson's most high-profile storyline took place in 2003 when she feuded with Dawn Marie. She has also been a part of the all-female stable (i.e., a group of storyline-associated characters), known as Vince's Devils, which ended its run in 2006.

Besides being a pro wrestling, Torrie Wilson has been on the cover of several magazines, including FHM and Playboy (which Wilson posed for twice, one featuring both Wilson and Sable).

On April 6, 2019, Torrie Wilson was inducted into the WWE Hall of Fame.

Steven Cook was born on December 10, 1984, in Boise, Idaho, U.S. He is known professionally as Steve Cook. He is an American professional bodybuilder and two-time Mr. Olympia's top ten finishers.

Moreover, Steve Cook is known for his work on YouTube. In July 2020, his channel had 1.3 million subscribers

After college, Steve Cook worked as a waiter at Texas Roadhouse.

In 2010, Steve Cook got his start in professional bodybuilding at a Muscle & Fitness event during Mr. Olympia's weekend. After winning the M&F Male Model Search, Steve Cook became a bodybuilding.com and Optimum Nutrition spokesmodel.

In 2011, he won the Naturally Bodybuilding Championship hosted by the NPC Iron Man magazine. He has a title from an NPC Junior National Championship.

Steve Cook regularly appears on the covers of fitness magazines like “Iron Man” and “Muscle & Fitness”.

He is a co-owner of the fitness app Fitness Culture and gym of the same name in St. George, Utah.

Steve Cook was a coach on season 18 of The Biggest Loser on USA Network.

Jeremy Shada was born on January 21, 1997, in Boise, Idaho, U.S. Jeremy Shada is an American actor, voice actor, singer, YouTuber, and musician who is best known for his work as the voice of Finn the Human from the American animated television series Adventure Time and Lance in Voltron: Legendary Defender.

Moreover, Jeremy Shada is known for starring as various characters in the sketch-comedy series Incredible Crew. He is also known as the bass player and secondary vocalist in the rock band Make Out Monday.

Jeremy Shada's most recent appearance is in the 2020 Netflix original television series, Julie and the Phantoms, as Reggie Peters, one of four main ensemble members, including Charlie Gillespie, Owen Joyner, and Madison Reyes.