Travel addict writing about the wonders of the world. Visited 30+ countries, lived in 4.

5 Amazing Facts about Denmark and the Danes 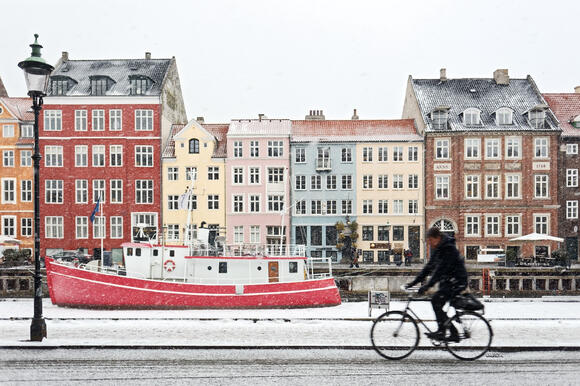 A few weeks ago, I visited Copenhagen, in Denmark. It was my first trip to a Northern European country, and it felt like entering a parallel universe. People are kind and respectful, everything is clean, the city is functional and well-integrated with nature, society seems to work properly.

Denmark is everything you ever heard about Scandinavia, but always thought was an exaggeration. It isn’t. They really are an advanced society. But one with some peculiar perks.

These are the most fascinating facts I learned on my trip about Denmark and its people, the charming Danes.

1. They leave their babies outside in the cold

The Danish winters often reach negative temperatures. Yet, parents think it’s a good idea to let their babies nap outside, in strollers, just so they can toughen up. Some sleep experts claim the fresh air can induce a deeper slumber, while also decreasing exposure to germs.

Not only do parents leave babies in the garden of their houses, but they also leave them outside in the middle of the city, while going for a hot drink in a coffee shop, for example.

This is not a strictly Danish practice, but also a tradition in other Scandinavian countries.

For those who fear the babies might get kidnapped, be reminded that Denmark is the 5th safest country in the world, so stealing babies is not really a thing there.

2. Prisoners can wander out of prison

As we said, crime in Denmark is relatively low. But even when someone ends up in jail, the whole experience is completely different than one would expect, for example, in the US.

Danish prisons privilege personal dignity above all else, so they strive to keep prisoners’ lives as humane as possible. Some of them, even let prisoners in and out. As this article puts it, “prisoners wear their own clothes, cook their own meals and have private family visits as often as once a week”.

Take the example of Storstrøm Prison, a top security facility located on an island, that looks more like a hotel. The en-suite cells have tall, barless windows and flat-screen TVs, the gardens were designed by a landscape architect, and the prison holds an impressive sports and culture center.

And yet, they are very polite.

I knew this before I arrived in Denmark, so when I met my Danish friend, I asked her “How do you say ‘please’ in Danish?”. She thought for a while and then looked at me: “we don’t”.

Now, would you be so kind as to continue to the next point?

I saw two dicks in Copenhagen. I didn’t intend to see any of them. They belonged to two guys coming out of the water in front of a food market. They were totally naked, came out, and dried themselves without worrying about covering their parts.

The Danes seem to have a healthy relationship with their bodies and don’t get shy in this regard too often. In fact, in one of their annual festivals, the Roskilde Festival, they even have a naked run, where participants run around the campsite completely naked. It became so popular that the festival was forced to create qualifiers for the male-run.

In the sunshine, or in the dreary Danish winter.

Nine out of ten Danes have a bike, and biking accounts for a quarter of all personal transportation in the country for distances under 5km.

There are bike lanes throughout the entire capital, and bike racks at every destination. This plays a major role in Copenhagen being the greenest city in the world.

What’s more, they bike like supermodels. Seriously, they don’t seem tired or sweaty. Instead, they keep their backs straight while cycling in fancy clothes on their fashionable bikes.

6. Gangs shoot enemies on their butts

This one might be more of an urban myth than an actual fact. One of my sister’s Danish colleagues told her about it but I couldn’t find any information to back it up, except for this isolated story. Still, I wish it would be true because it would be the perfect metaphor for the Danish culture.

Despite being a safe country, Denmark has some gang activity taking place, namely in Christiania, Copenhagen’s “free town”. But, polite and considerate as the Danish are, they don’t shoot to kill when they are involved in a gang rivalry. Instead, they shoot their enemies on their butts — a kinder way to say “hey, would you be so kind not to mess with me?”.

Travel addict writing about the wonders of the world. Visited 30+ countries, lived in 4.

It’s no secret that the Carolinas aren’t really known for fine dining and gastronomic experiences. Most settle for that good old southern comfort or traditional barbecue when going out to eat. Occasionally, a trip to Asheville or Charlotte will give North Carolinians a glimpse of fine dining but, well, it’s not quite it.

Even the front door was impressive. I arrived at this guy’s house in the sunny south of Portugal and was greeted by the maid. Smiling, she let me in and took me to the back of the house, where he sat by the swimming pool with his wife.

I never knew what I wanted to be “when I’d grow up”, so I ended up studying communications because my best friend did too. I worked as a journalist for a decade but, at 30, I decided to completely change my career and venture into the world of IT.

San Francisco is the city of incredible photo opportunities. Famous for impressive landmarks, very steep hills, impeccable architecture, and breathtaking sunsets, the Golden City is a beautiful place that will make you fall in love with it instantly.

6 Most Beautiful Drives in Oregon

Oregon has some of the most beautiful highways and byways in the country. We can safely say that this state is the perfect road trip destination. The changing scenery looks like it is made for long drives and small adventures with your friends and family. What makes Oregon so intriguing is that you can go from an evergreen forest, and verdant valleys, to a desolate desert in just a couple of hours. It is an exciting place you can explore from the comfort of your car. Traveling with your vehicle comes with many perks, one of them being the ability to make a stop anywhere. All of the drives on this list offer jaw-dropping landscapes, so don’t forget your camera at home because you will be taking photos non-stop. Let’s dive in!

Los Angeles has stunning concert halls and enormous arenas where some of the biggest names in the music industry often perform. But some people are not into big crowds every night of the week. So if you want to enjoy live music in a more intimate setting, here is a list of the best live music bars in the City of Angels!

Are you a food-enthusiast who loves shopping, looking for a greenery-filled city with loads of opportunities for outdoor activities? If so, then Downtown Greenville, SC, is the place for you!

7 Fun Indoor Activities To Do in San Antonio

San Antonio is a park city boasting numerous cultural attractions. It is built along the river banks and has a network of walkways lined with retail outlets, restaurants, bars, and historical missions.

Miami has the perfect climate, lively nightlife, and a beautiful coastline but offers so much more. Art – natural and artificial – encompasses the world-famous vacation spot, Miami City. No wonder this wondrous place leaves everyone in awe.

The number of LGBTQ+ bars in Portland started to decline in the last couple of years. Portland has a thriving LGBTQ+ community, so the situation will probably improve soon. Meanwhile, there are still plenty of LGBTQ+ friendly places around the city where you can grab a drink and spend a relaxing evening in good company.

Oregon is such a unique place ideal for nature lovers and adventurers. The Pacific Ocean on one side and mountain ranges on the other create endless outdoor opportunities. With that said, there are so many Instagrammable spots in this state that you won’t be able to put your camera down for a single minute.

The Emerald City influenced so many music acts that started their careers here and conquered the world. Most have probably heard of Nirvana and Pearl Jam, but did you know that Jimmy Hendrix is from Seattle as well?

Los Angeles is one of the top tourist destinations in the US. Approximately 50 million people visit the city annually!. However, the glorious city has a reputation for crime rates too. Although the authorities claim the situation is under control and much better than in previous decades, one should never take risks.

Washington DC’s association with the White House and politics has given it a boring reputation. Most of the tourists visiting the city consider it a place to explore the US government and history.

Escaping the heat is impossible in Miami. And, we mean it, quite literally. The average temperature ranges from 75 to 85 degrees in summers. And, you can expect this to rise during heat waves.

6 Most Instagrammable Spots in Washington State

The nature of Washington State can be pretty inspiring to budding photographers. Abundant in gorgeous landscapes, this corner of the world is made for exploring. Of course, there are big cities like Seattle that can also get your creative juices flowing.

5 Most Beautiful Drives in Utah

Utah is a state that prides itself in spectacular scenery. After all, it has five national parks and a unique climate. Visitors can explore deep canyons, high deserts, and unusual rock formations regardless of the time of the year. And the best part is that you can enjoy nature and scenery while driving through this state in the comfort of your car.

Live music and a glass of refreshing drinks do go hand in hand. While Boston might not have a world-famous music scene, it is still a fun place to catch a show. There are plenty of live music bars all around Beantown - some are large venues, while others are smaller and cozier. Our focus is on the latter. You can catch a live show any night of the week in Boston, so let's take a look at some of the best live music bars here!

Amazing food is one of the best things that can happen to a foodie!. Well, things become even more exciting when delicious food couples with a thrilling atmosphere. It becomes a fun-filled, enjoyable experience one can cherish for years to come, especially when you're going through bad food days...