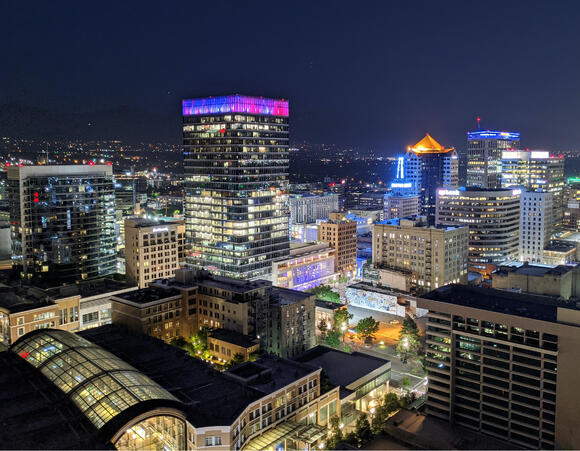 Photo by Tanner Crockett on Unsplash

Salt Lake City was founded in 1847 by early pioneer settlers, led by Brigham Young, who was seeking to escape persecution they had experienced while living farther east.

After serving in the United States Marine Corps and taking on a variety of odd jobs, Wilford Brimley became an extra for western films. He played in many films including The China Syndrome (1979), The Thing (1982), Tender Mercies (1983), The Natural (1984), and Cocoon (1985).

Through these and other roles, Wilford Brimley became widely known for portraying gruff or stodgy old men, most notably on the 1980s NBC drama series Our House, also starring Deidre Hall, Chad Allen, and Shannen Doherty. One exception was when he played William Devasher, the sinister head of security for a Mafia-associated law firm, in the Tom Cruise film The Firm (1993).

Roseanne Cherrie Barr was born on November 3, 1952, in Salt Lake City, Utah, U.S. She is an American actress, comedian, writer, producer, and presidential candidate. Roseanne Barr began her career in stand-up comedy before gaining acclaim in the television sitcom Roseanne (1988–1997; 2018).

Roseanne Barr won an Emmy and a Golden Globe Award for Best Actress for her work on the show.

Roseanne Barr became a stand-up comedian in 1980. In the late 1980s and early 1990s, she gained fame through her role in Roseanne and other performances.

She sparked controversy when performing "The Star-Spangled Banner" at a nationally aired baseball game on July 25, 1990. This performance was met with condemnation from baseball fans and sportswriters and was called "disgraceful" by then-President George H. W. Bush.

She has been active and outspoken on political issues and she won nearly 70,000 votes for president in the general election of 2012, as the presidential nominee of the left-wing Peace and Freedom Party.

Roseanne was revived in 2018 on ABC. A rating success, it was renewed for an additional season but was canceled after Barr made a controversial tweet condemned as racist by many commentators.

Ricki Noel Lander was born on December 14, 1979, in Salt Lake City, Utah, U.S. She is an American actress, model, designer, and entrepreneur.

In 2008, she played a flight attendant in the blockbuster movie Iron Man. Ricki Lander also starred as the lead character in The Harsh Life of Veronica Lambert (also known as 5 Nights in Hollywood) with Ed O'Ross, Bart Johnson, and Elena Satine.

Ricki Lander appeared in the television shows CSI: Crime Scene Investigation, Ugly Betty, Dirt, The Class, and Prison Break. Ricki Lander played a goblin disguised as a fairy in the fourth season opener of the HBO series True Blood alongside Anna Paquin, in 2011. Ricki Lander completed an episode of the CBS series Unforgettable and guest-starred on the Season 5 opener of Blue Bloods.

In 2013, Ricki Lander appeared in the Farrelly Brothers Comedy Movie 43; where she was cast in the segment 'Truth or Dare' playing the nurse to Halle Berry's character.

Ricki Lander works as a correspondent for the exploration series The Travel Detective alongside travel guru Peter Greenberg. In 2014 she was a correspondent and producer on the PBS documentary Israel: The Royal Tour, filming and narrating behind-the-scenes footage with Prime Minister Benjamin Netanyahu and First Lady Sara Netanyahu.

Ricki Lander's most recent role was in 2015 in Ant-Man with Paul Rudd.

While pursuing her acting career, she spent several years under contract with Ford Models, shooting for a variety of brands and publications. In 2014, sports e-commerce conglomerate Fanatics and FansEdge began retailing a collection of women's fan gear for College, MLB, NHL, NBA, and NFL designed by Lander called Let Loose By RNL.