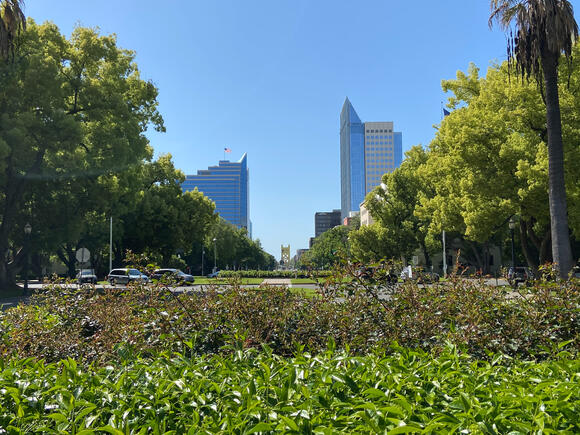 Photo by W K on Unsplash

Sacramento is the capital city of the U.S. state of California and the seat and largest city of Sacramento County. It is located at the confluence of the Sacramento and American Rivers in Northern California's Sacramento Valley.

Sacramento is the sixth-largest city in California and the ninth-largest capital in the United States.

It is the seat of the California Legislature and the Governor of California and the state's political center and a hub for lobbying and thinks tanks. Also, Sacramento is the cultural and economic core of the Sacramento metropolitan area.

Brianne Sidonie Desaulniers was born October 1, 1989, in Sacramento, California. She is known professionally as Brie Larson. She is an American actress and filmmaker.

She won an Academy Award, a Primetime Emmy Award, and a Golden Globe. Time magazine named Brie Larson one of the 100 most influential people in the world in 2019.

She won the Academy Award for Best Actress for her role in the movie Room (2015).

She won a Primetime Emmy Award for the movie produced by her, the virtual reality series The Messy Truth VR Experience (2020).

Jessica Michelle Chastain was born on March 24, 1977, in Sacramento, California. She is an American actress and producer. She received a Golden Globe Award and nominations for two Academy Awards. Also, Time magazine named her one of the 100 most influential people in the world in 2012.

Jessica Chastain is the founder of the production company Freckle Films.

Samuel Pack Elliott was born on August 9, 1944. He is an American actor. He is the recipient of several accolades, including a National Board of Review Award, and has been nominated for an Academy Award, two Golden Globe Awards, two Primetime Emmy Awards, and two Screen Actors Guild Awards.

In 2018, Sam Elliott was cast in the musical drama A Star Is Born (2018), for which he was nominated for the Academy Award for Best Supporting Actor, a Critics' Choice Award, a Screen Actors Guild Award, and won a National Board of Review Award.