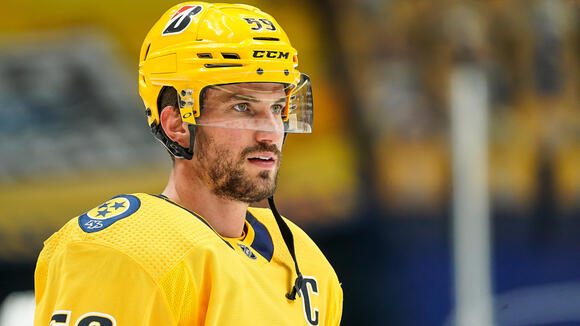 NASHVILLE, TN — Players in the NHL have spoken and voted Nashville Predators' captain Roman Josi the second-best defenseman in the league.

In the 2020-2021 NHL regular season, Josi accumulated 33 points with eight goals and 25 assists in 48 games as the Predators finished fourth. The Bern, Switzerland native also led the Preds into the 2021 Stanley Cup playoffs, but they lost to the top-seed Carolina Hurricanes in the first round, 4-2.

This year is Josi's thirteenth season in the NHL after been drafted 38th during the 2008 NHL Draft. Before being drafted, he played with his hometown team, SC Bern.

Each year the National Hockey League Players' Association surveys nearly 500 players on hockey-related questions from on-ice play to the player's style and more. This year, Tampa Bay Lightning defenceman Victor Hedman won the voting as he tallied a staggering 308 votes from around the league.

Hedman, 30, won the Stanley Cup last season with the Lightning while also bringing the Conn Smythe award as the playoffs MVP. The Swedish native also finished top-three in the Norris Trophy nomination this year, along with New York Rangers defenseman Adam Fox and Avs' Makar. He won the award in the 2017-18 season.

NASHVILLE, TN – Are you seeking a brunch spot that can help you recover from a hangover? On Bransford Ave, Punky Griddle is the finest option. Pfunky Griddle is a Nashville all-you-can-eat restaurant. The owner allows consumers to prepare their own meals.

NASHVILLE, TN - Are you looking for the best Airbnb or hotel in Nashville? Misfit Home is the finest place to stay for a short period of time before making a bucket list for your Nashville visit.

NASHVILLE, TN - Frist Art Museum invites Art Teachers from elementary, middle school, and high school across Nashville and Davidson County to submit their masterpiece in the upcoming exhibition, Nashville Art Teacher: Beyond the Classroom. The exhibition is dedicated to honoring Alma W. Thomas, a Washington art teacher and also the first African-American art teacher to have her own exhibition in Whitney Museum of American Art in 1972.

Where to go berry-picking in Rutherford County

RUTHERFORD COUNTY, TN - Have a weekend family trip for berry picking and outdoor activities in Rutherford County. These farms have strawberries, blueberries, and even blackberries.

Where to have your meals in Murfreesboro

MURFREESBORO, TN — Murfreesboro neighborhood has a lot of food to offer to its customers. The restaurants in Murfreesboro offer guests a different dining experience with a variety of food options. Some restaurants have bars where guests can also enjoy some drinks during the day or night time. Check the list to find dining options in the Murfreesboro area.

Launch Tennessee announced committee in search for next CEO

NASHVILLE, TN - The Launch Tennessee (LaunchTN) Board of Directors announced Friday, Aug. 27, the formation of a 12-member search committee to spearhead the organization's efforts to find its next Chief Executive Officer. The group will conduct its first organizational meeting next week, following which the committee's methodology will be disclosed.

Cheekwood to open the Reflecting Pool after finishing restoration project

NASHVILLE, TN - Nashville's art museum and botanical garden, Cheekwood, in partnership with Vanderbilt Health, has announced the schedule for Wellness 360, adult wellness and rejuvenation program for senior communities in Nashville. Wellness 360 offers series of weekly events consisting of yoga classes, pilates sessions, and talk shows about meditation and mindfulness. Wellness 360 is held from July to October, taking place in several areas in Cheekwood.

Get ready for Nashville’s Brew Fest 2021

NASHVILLE, TN - Many women and children today are battling it out in a toxic relationship. To help women in these situations, the Mary Parrish Center is prepared to assist survivors of sexual violence and women's abuse in achieving a better quality of life.

NASHVILLE, TN – Way Late Play Dates: Little Corvette is a fundraiser event for adults 21 and up on Thursday, September 2nd, 2021, that allows attendees to explore a science and culture display featuring cars, music, and the 1980s at Adventure Science Center.

NASHVILLE, TN - Nashville Black Chambers of Commerce has announced its upcoming business event, Building Strong Bridges to Our Future, this Tuesday on Aug. 31. The business event features African-American business partners and professionals in the Real Estate and Development Industry. Building Strong Bridges to Our Future provides black professional and business communities in Nashville and neighboring counties to connect and develop relationships with business experts.

FRANKLIN, TN - Get your caffeine shots at these Franklin's most-loved coffee shops. They serve various coffee beans, black or creme, with or without sugar. The Coffee House offers vintage and cozy corners to enjoy the coffee with. The shop is decorated with rustic wall decorations, house plants, and a classic interior. The Coffee House serves premium coffee roasts, from light roast to dark roast, with selections of sandwiches, crepe, and salad to accompany the coffee. Customers can also get non-coffee beverages such as lemonade, tea, and kombucha.