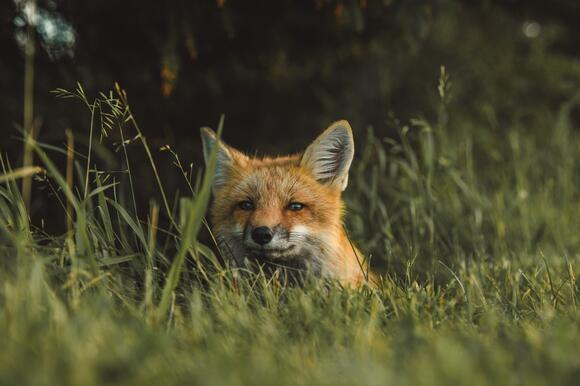 Photo by Scott Walsh on Unsplash

My son wants to catch a fox. Not just any fox, a red fox.

He’s 5 — and I know every parent says this about their kids — but he has a good brain in his head.

He thinks logically, he remembers random facts, he knows that we brush our teeth to clean away the bacteria and not to — as our dentist once said — “tickle our teeth.”

“Teeth don’t have nerves,” he promptly reminded her.

His plan, to catch this fox, is to use a decoy chicken to lure the red fox into an open patch of grass where my son will be hiding nearby — disguised as a “rock or maybe a bush” — with his set of paralyzing blow darts at his ready.

The thing is there aren’t any red foxes where my parents live, which is where we are currently staying on a short visit. My parents do, however, have a backyard filled with trees and plants and to me, a full-grown human, they look like a bunch of trees and plants.

But to my son — who thinks so logically and knows so many random facts and tells dentists how to do their jobs — he sees something magical.

“I’m waiting to see a fox,” he said, standing at the window facing the backyard, “I think it’s in that forest.”

There is no forest. Only a line of trees that block a fence that blocks my parents’ neighbor’s yard. I saw a line of trees. He saw a forest. I knew with absolute certainty that a ranch-style blue house sat behind those trees.

He knew with absolute uncertainty that a red fox sat behind those trees, waiting for his chance to catch Pop-Pop’s chickens.

Many of us, myself included, lack the skills to embrace the unknown. We shun it. We avoid it. We do everything in our power to shine some light into the darkness because we’re afraid.

Which is a shame, because the unknown sectors of our lives offer us opportunities for growth and transformation.

Children remind us that there is magic in not knowing things. And I want to find that magic again.

Confront the uncertainty in your life

Many of us are uncomfortable with uncertainty.

Yes, it was fun when we were kids and could pretend that lurking foxes hid among the trees, but at the end of the day Mom made us dinner and Dad tucked us into bed. We got to do those things ourselves now.

Whether it’s our career, relationships, physical health, financial health, the uncertainty behind “what makes this part of me tick” can be so overwhelming that we ignore that area of our life all together.

Take my career for example. Until recently, I was so uncertain about what I wanted to do with my life that I simply ignored it. Instead, I busied myself with clients and work I neither enjoyed nor wanted to do in the first place.

It took quarantine for me to finally realize what I wanted to do was in front of me all along: writing.

What areas of your life have the most uncertainty? Go to those places. Seek the unknown about yourself. Asking yourself “What if I try this?” is simple to do.

What’s the worst that can happen?

While I understand the adult need to mitigate risks, asking ourselves to see a little more optimistically has its advantages.

It opens us up to trying new experiences. It primes a growth-mindset. It gives us the confidence to be better humans.

In your forest, there may be foxes lurking. Or there may be a magical brook. We’ll never know by asking, “What’s the worst that can happen?”

Finding the forest in only a few trees

I stood at the same window this morning as the early sun peaked over the Western Pennsylvanian hills.

I wanted to see the forest, but like most adults, I’ve been infected with certain facts and rules of the world so that even in moments of uncertainty I have a vague understanding what might be.

Grown-ups know things. We operate in certain terms. So much so that the magic of a forest is lost to us.

I thought about all this as I stood at the window and reminded myself that the only real uncertainty is the future. What does the coming day hold? What about the following year? Or the next decade?

Slowly, I saw it. The forest, the unknown, the magical realm we call tomorrow.

“I’m waiting to see a fox,” I said to myself and smiled.