If you drink too much, your spouse probably does, too 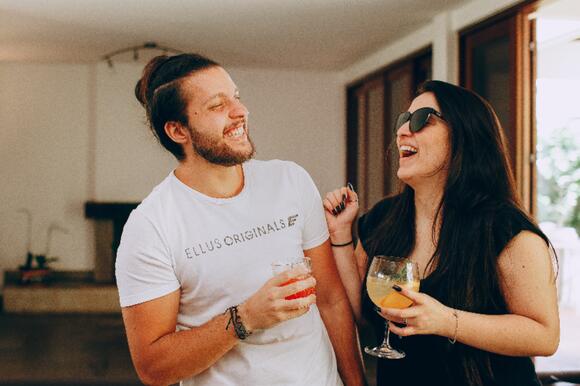 If you’re an alcoholic you probably are married to one, too, research published in the Journal of the American Medical Association hints.

And if you’re not an alcoholic but your spouse is, you have a good chance of becoming one eventually.

And if you’re not having a good time while you drink with your spouse, chances are your marriage will end in divorce.

I guess that’s co-dependence in its most negative form. If you can’t be happy being codependent, the marriage suffers, the research found.

Or put another way, if you’re both not on the same level when it comes to your drinking, problems are sure to ensue.

In a first of its kind study on Swedes, researchers analyzed more than 8,500 husband-wife pairs. They discovered that upon a spouse’s diagnosis of alcoholic use disorder, or AUD, the other spouse’s chances of developing AUD skyrocketed before leveling back off after a couple of years.

The findings appeared in JAMA Psychiatry.

In other words, if your spouse doesn’t have a drinking problem your chances of developing one, if you haven’t already, are less.

The study included nuptials born between 1960 and 1990. Women were more likely to slide into AUD after their husbands did, rather than the other way around.

Nuptials became most vulnerable to alcoholism within the first year of their spouse developing it, the researchers found.

What else happens when one spouse drinks heavily and the other doesn’t, according to the research?

“The chances that this problem produces biases in our findings is reduced by our showing that controlling for AUD registration between marriages had little effect on the predisposing effect of moving from a first spouse without AUD to a second spouse with AUD.”

Translated: The spouse who wants a divorce moves from one drinking spouse to another.

If you’re the non-drinking spouse and want to see your ex-husband fail in his new marriage, he probably will. The “hazard ratio” when he marries another drinker explodes nine-fold. Bad things are bound to happen.

I was hired as a writer once by a chain of rehab centers that caters to couples. I was excited to take on that project because “couples rehab” has been frowned upon by the behavioral health establishment for years.

Heaven forbid we meet the alcoholic or the addict where they are and help them get sober on their own terms.

Don’t misunderstand. Not everyone who is married to an alcoholic becomes one. Alcoholism is driven by genetics and other factors, too.

“Although genetic and biological factors contribute strongly to the predisposition to alcohol dependence, these findings complement our prior work on marriage and divorce in showing how close social bonds such as marriage can also powerfully influence, for better or worse, the risk for AUD.”

Tips for saving a marriage ravaged by alcohol

You can only save a marriage ravaged by alcohol if one or both partners admits they have a drinking problem. It's true that admitting you are powerless over alcohol is the first step.

Couples counseling can be effective, but only if both partners agree that alcohol is the issue. Lopsided counseling is a waste of money.

If you never see your wife or husband anymore because they're out with their drinking pals, they're married to the bar. Ask yourself if you deserve better.

In the event a marriage becomes so miserable and so distant it's like you're not even married anyway, consider a divorce. Both of you likely will be much happier.

If drinking has only become a minor issue in your relationship, don't let it become a bigger one. Replace nights out drinking with new tradititions that you create with your spouse. Try going to a movie at the cinema instead of dollar beer night at the tavern.

If your partner behaves in ways that embarass or upset you when they're drinking, tell them right away. If they become belligerent, always put the safety of yourself and your children first.

Leave situations at the first sign of violence or uncontrolled anger. Don't let the relationship become abusive beyond language. If it's gone there, that's bad enough.

It's fine for couples to drink together in moderation. Remember, it becomes a problem when it begins to adversely affect your life, be it your spouse's drinking or your own.

(Aurora, Colo.) An Aurora program that offers small businesses grants for security upgrades may get a boost Monday. The City Council previously committed $3 million for the program. The money comes from the American Rescue Plan Act or ARPA. Councilmember Curtis Gardner proposed adding another $1.5 million to the program due to high demand. The extra $1.5 million would come from an ARPA reserves fund. The program will run through June 23, 2023, on a first-come, first-served basis or until the money is spent.

"The Yearling" sits outside the Denver Public Library downtown branch. More public art is coming to the library and other Denver locations.City and County of Denver. (Denver, Colo.) Denver has public art tucked into nooks and crannies around town. Now the city plans to spend another $725,292 on more public art.

Denver plans to transform the Sloan's Lake boathouse into a community center. Sloan's Lake is one of Denver's most vibrant neighborhoods. It is bustling with activity. The city does not have a timeline for when renovations will begin. The project is being funded with bond money, according to City Councilmember Amanda Sandoval. Sandoval broke the news of the new community center in a Facebook post this week.

Despite recognizing youths in Aurora get shot almost every day, City Council members delayed funding youth violence programs Monday. As part of its plan to quell youth violence, Aurora plans to give $500,000 to local nonprofits.

(Denver, Colo.) The Aurora City Council discussed Monday discussed how best to house those moved from homeless encampments in so-called "safe outdoor spaces." During a study session, most council members indicated they preferred the alternative over renovating the Aurora Day Resource Center. According to city staff, a renovated shelter could hold more than 100 people.

(Aurora, Colo.) The rubber hit the road Monday during discussions on street repairs in Aurora. In response to a request by councilman Dustin Zvonek, city staff showed the City Council what it would cost $35 million through 2028 to make minor improvements to the city's streets.

(Denver, Colo.) Despite an unlikely political alliance opposing it, a ban on concealed-carry weapons in city buildings and parks became law Monday. Denver City Council 9-3 for the ban. Councilmembers Kevin Flynn, Jamie Torres and Candi CdeBaca voted no. An amendment by CdeBaca to remove parks from the ban failed on a 9-3 vote, with Flynn, Torres and CdeBaca voting yes.

Homeless will continue to occupy Aloft hotel in downtown Denver

(Denver, Colo.) A downtown Denver hotel will continue to house people experiencing homelessness at risk for COVID-19 through the end of this year. City Council will consider the item on its Monday consent agenda. Matters on the consent agenda usually pass without a roll call vote.

(Denver, Colo.) Caring for Denver has made great strides in combatting substance abuse and mental health problems for Denverites, according to its 2021 annual report. Created by a city ordinance, Caring for Denver launched in 2019. Sales tax dollars fund the foundation.

(Denver, Colo.) Denver will consider making Juneteenth, commemorating the end of slavery, a paid holiday. The Denver City Council will discuss the issue Tuesday at the Finance and Governance Committee meeting. The public can speak at a 1:30 p.m. public hearing. If approved, the full council still needs to vote on the bill to make it law.

(Denver, Colo.) Not having Internet access or the skills to go online can feel isolating. The City of Denver recognizes that not all its residents have the means to buy a computer or afford internet access. Others may have a computer they don't know how to work. That's why Denver has created four full-time "digital navigators."

(Denver, Colo.) Aurora awarded a contract for $250,000 Monday to a company that will sweep away homeless encampments. It also adopted a resolution concerning storing items of people displaced by the sweeps.

Correction: The story originally reported that Boulder is banning concealed carry weapons. This is incorrect. Boulder is considering a comprehensive gun bill that bans open carry in public places, among other things.

(Denver, Colo.) On Monday, a woman told the Aurora City Council that construction companies are exterminating prairie dogs while building a new housing development in the Fitzsimons area.

This man criticized the Denver City Council Monday for not doing enough to help the homeless.City and County of Aurora/Denver 8. (Denver, Colo.) People experiencing homelessness packed the City Council chambers and three overflow rooms Monday as they commemorated the 10th anniversary of Denver's camping ban.

Denver's famous big, blue bear.City and County of Denver. (Denver, Colo.) If you live in Denver, you probably have noticed the city boasts several public art pieces. More than 400 sculptures, murals and other artwork decorate the city. Coloradans created more than half of the art.

The Blair-Caldwell LIbrary will host a renovated reading room.City and County of Denver. Blair-Caldwell African American Research Library in Denver's Five Points neighborhood will get a $2.6 million makeover.