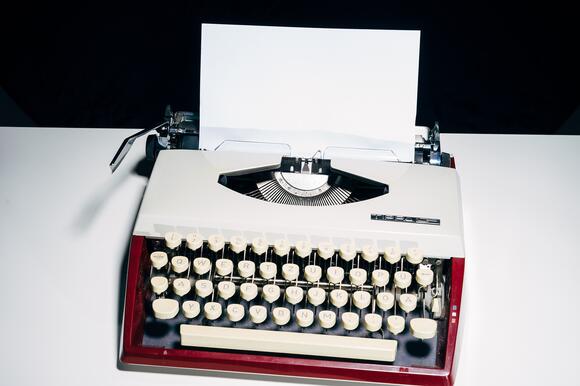 I won't ever forget the Christmas Santa brought me a Buddy L typewriter.

The house almost burnt down. More on that in a second.

Even when I still believed in Santa Claus, I knew I wanted to be a journalist.

One year when I was seven years old, a large package appeared under the tree. I didn't open that package first. I saved it for last.

I thrive on suspense.

But the first package I opened was typing paper. I knew Santa had brought me a gift that would forever chart my life's course.

I opened the large package to find a Buddy L typewriter. Buddy L makes durable toys. My mother probaby figured I would be banging on the typewriter like a curmodgeon journalist, even at seven years old.

Santa Claus always came to the house when I would ride with mom or dad to take grandma home.

My parents would point to a red light glowing atop the water tower near our house. They would tell me that's Rudolph's red nose, and for a while I believed it.

They told me if I would ride along to take grandma home, Santa would come while I was gone.

In my mind, Rudolph flew down from the water tower and landed Santa's sleigh on my roof. Down the chimney he went, I thought.

In reality, mom and dad got the presents out of the attic.

My typewriter was a masculine two-toned blue. I had a great Christmas photo of me pounding out stories on it lying under the tree.

I remember typing up reports that Christmas Eve about Native Americans and Abraham Lincoln. When I was in second grade, those were my favorite topics.

Abrahram Lincoln to me was the finest president who ever lived -- he freed the slaves.

I write a bit about modern-day slavery, human trafficking, even now.

I wish I had kept my Buddy L typewriter. I found one online for $20 but it's broken.

Still, it would make a great conversation piece for my apartment. Maybe I'll buy it for myself for Christmas.

Table centerpiece goes up in flames

I was too busy pounding out hot stories that Christmas to pay attention to anything else.

A candle on the dining room table centerpiece burned too low. It set the holiday centerpiece ablaze.

I remember mom and dad freaking out about the fire and furiously throwing water on it. It turned out to be a big, smoky, stinky mess.

The poor little poodle was so nervous it vomited all over the carpet. Mom and dad were cussing.

Under the circumstances, the smoke and water damage turned out to be pretty minimal, thank goodness.

For me as a journalist, the house fire was exciting. I had breaking news to write about.

I did write about the fire. My story was published in the Eagles Editorial, the newspaper of Eugene Field Elementary School, Rock Island, Ill.

I remember writing a very dramatic story about the house fire. A writer never should use exclamation points -- maybe three in a career -- and I used about a dozen in my first "police beat" story.

Looking back, the Buddy L typewriter Christmas was my favorite Christmas ever.

It meant so much that mom and dad -- I mean, Santa -- listened to me when I told them I wanted to be a journalist. All journalists need a typewriter, I explained.

Mary Tyler Moore had one. Lou Grant had one.

And then, I even got to cover my first house fire. It felt so good to bang those keys with the energy of a journalist cranking out a big story.

I always have been a key clanker. It's good exercise.

Back in the day, even before the electric typewriter, you had to strike manual typewriter keys hard.

I remember feeling high off the smell of the ink from my Buddy L's ribbon.

The clickety-clicks of the keys sent waves of motivating electrinity down my spine.

I knew I was going into the news businss for as long as I can remember. But when I got my typewriter, it was like giving a musician an instrument.

I've had a lot of computers through the years, but I only owned one typewriter. My Buddy L, the typwriter Santa brought me way back in 1977.

What are the chances Mount Evans will be renamed?

What are the odds Mount Evans will be renamed, as Indigenous peoples have proposed?. The Clear Creek County Commission already has approved the name change to Mount Blue Sky, but now it must be reviewed by a state agency, the Colorado Geographic Names Advisory Board. The board will consider six different names, and a decision won’t be made until late this year or early next, according to Chris Arend of the Colorado Department of Natural Resources.

(Denver, Colo.) The City and County of Denver may join Aurora and the state and end the tax on diapers. A bill to end tax on diapers tops the City Council’s Finance and Governance Committee meeting agenda of May 31. The meeting was canceled due to the holiday, however. Committee Chair Kendra Black said since the bill is on the consent calendar it will not be discussed anyway.

(Denver, Colo.) The Denver City Council approved nine more on-call contracts Monday for the Parks and Recreation Department despite transparency concerns. On-call contracts allows cities to order work on as-needed basis without having to put the item out to bid. Such contracts generally are used when services urgently are needed, and the city is unable to perform work internally.

(Denver, Colo.) When a constituent reached out to City Council President Stacie Gilmore with her foreclosure nightmare, Gilmore learned just how powerful homeowners associations can be.

(Denver, Colo.) Mental Health Center of Denver has a new name and a new service for people needing emergency counseling. The organization has rebranded as WellPower and is offering free online therapy sessions called TherapyDirect.

(Denver, Colo.) Denver plans to pump $8.6 million Monday into early childhood education programs such as Head Start and the Boys and Girls Club. It also will pay for the schooling of early childhood educators who plan to work with immigrants, refugees, people of color or children with disabilities.

(Aurora, Colo.) An Aurora program that offers small businesses grants for security upgrades may get a boost Monday. The City Council previously committed $3 million for the program. The money comes from the American Rescue Plan Act or ARPA. Councilmember Curtis Gardner proposed adding another $1.5 million to the program due to high demand. The extra $1.5 million would come from an ARPA reserves fund. The program will run through June 23, 2023, on a first-come, first-served basis or until the money is spent.

"The Yearling" sits outside the Denver Public Library downtown branch. More public art is coming to the library and other Denver locations.City and County of Denver. (Denver, Colo.) Denver has public art tucked into nooks and crannies around town. Now the city plans to spend another $725,292 on more public art.

Denver plans to transform the Sloan's Lake boathouse into a community center. Sloan's Lake is one of Denver's most vibrant neighborhoods. It is bustling with activity. The city does not have a timeline for when renovations will begin. The project is being funded with bond money, according to City Councilmember Amanda Sandoval. Sandoval broke the news of the new community center in a Facebook post this week.

Despite recognizing youths in Aurora get shot almost every day, City Council members delayed funding youth violence programs Monday. As part of its plan to quell youth violence, Aurora plans to give $500,000 to local nonprofits.

(Denver, Colo.) The Aurora City Council discussed Monday discussed how best to house those moved from homeless encampments in so-called "safe outdoor spaces." During a study session, most council members indicated they preferred the alternative over renovating the Aurora Day Resource Center. According to city staff, a renovated shelter could hold more than 100 people.

(Aurora, Colo.) The rubber hit the road Monday during discussions on street repairs in Aurora. In response to a request by councilman Dustin Zvonek, city staff showed the City Council what it would cost $35 million through 2028 to make minor improvements to the city's streets.

(Denver, Colo.) Despite an unlikely political alliance opposing it, a ban on concealed-carry weapons in city buildings and parks became law Monday. Denver City Council 9-3 for the ban. Councilmembers Kevin Flynn, Jamie Torres and Candi CdeBaca voted no. An amendment by CdeBaca to remove parks from the ban failed on a 9-3 vote, with Flynn, Torres and CdeBaca voting yes.

Homeless will continue to occupy Aloft hotel in downtown Denver

(Denver, Colo.) A downtown Denver hotel will continue to house people experiencing homelessness at risk for COVID-19 through the end of this year. City Council will consider the item on its Monday consent agenda. Matters on the consent agenda usually pass without a roll call vote.

(Denver, Colo.) Caring for Denver has made great strides in combatting substance abuse and mental health problems for Denverites, according to its 2021 annual report. Created by a city ordinance, Caring for Denver launched in 2019. Sales tax dollars fund the foundation.

(Denver, Colo.) Denver will consider making Juneteenth, commemorating the end of slavery, a paid holiday. The Denver City Council will discuss the issue Tuesday at the Finance and Governance Committee meeting. The public can speak at a 1:30 p.m. public hearing. If approved, the full council still needs to vote on the bill to make it law.