I have a passion for travel so this is the majority of what I write about. It's a collection of stories from my past and present travel adventures. It's an unfiltered look at my experiences traveling the world as a young, black man.

Montreal was a solo trip I decided to take for my 29th birthday in June of 2016. I know what you’re thinking. Why would I celebrate my birthday alone? Well at that point, based on past experiences, I didn’t expect anybody to have a desire to celebrate that day with me so I wanted to save myself the disappointment.

Montreal far exceeded my expectations. The first thing I did upon arrival was hike to the top of Mont Royal Park. The view alone made it worth it. I spent a couple hours gazing at the skyline and people watching. Then I decided to take a stroll through the city to get a better feel for it. The first thing I noticed with the locals I communicated with is half spoke only French while the other half was fluent in both French and English. I had little knowledge on Canadian history so this was a surprise to me. As I continued my walk I ended up in a neighborhood full of West Indian culture. St. Lucia, Trinidad, Jamaica, and Haiti are a few of the countries I saw being represented. As a child of Trinidadian parents, I felt right at home since it was a major part of my upbringing. I was overcome with nostalgia in that moment. 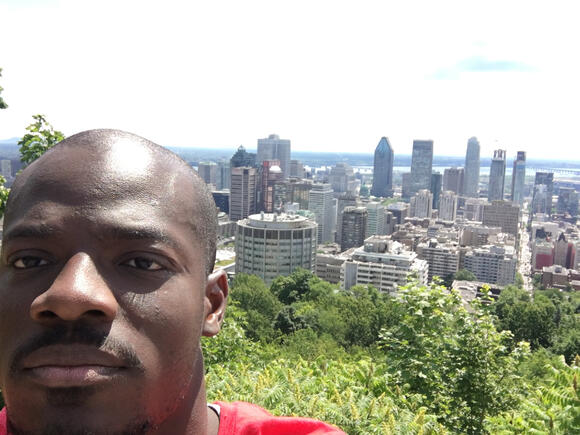 Later that night it was time to celebrate my birthday. Montreal has a vibrant, fun nightlife which includes street performers, live bands, and 20 somethings filling the streets. I took in the sites and did some bar hopping. I was having fun at first but soon realized there was nobody to wish me happy birthday when the clock hit midnight. Suddenly I was filled with sadness and wondered why I took this trip alone. I sat at the bar of Le Warehouse, head down, and cranberry vodka in my hand. Moments later my entire night shifted unexpectedly. I heard a voice in my ear say “Hi!”. I turned around to see a brunette sitting next to me and smiling at me. We engaged in small talk and I realized she was clearly inebriated. Her name was Annie. I told Annie that it was my birthday, which filled her with excitement. She then insisted on buying me a drink. She called her friends over and they also bought me drinks. Just like that I had a group of people around me to make the anniversary of my birth feel special. Annie kept doing this thing where she’d talk to me in French, I’d tell her I didn’t understand, she’d apologize and speak English for a moment, then return to speaking French again. This happened throughout the night. The times she did speak English it was the most hilarious nonsense I’d ever heard. I was laughing so hard I was in tears. A few hours later she disappeared but I stuck around for another hour to people watch. Watching drunk, white people dance is one of my favorite pastimes. By 4am I figured it was time for me to head out. I walked out the bar only to see Annie leaned against the railing unable to walk on her own while her friend looked on helplessly. I walked over to see if I could be of any assistance. Annie’s friend tells me they’re going to McDonald’s and invited me to join them. It was approximately 3 blocks away so I gave Annie a piggyback ride as the three of us headed to McDonald’s. After ordering our food we exchanged numbers and made plans to have lunch together. Then we hugged and went our separate ways. I texted her later that day but never got a response so I assumed she must have died(joking).

The rest of my stay in Montreal was more laid back. I visited a restaurant called La Banquise where I ate poutine for the first time. It was one of the most delicious foods to ever come in contact with my taste buds. The best part about it is how cheap and filling it was. I ate it more than a couple more times during my stay. After my meal, I did an extensive amount of walking and kept encountering different types of festivals. During the summer months, Montreal has a plethora of festivals everyday happening concurrently in different parts of the city. It reminded me of summertime in Chicago but better. It also happened to be Saint-Jean Baptiste Day, which is a national holiday in Quebec and day of celebration with a massive parade. This parade had dancers, choirs, acrobats, and marching bands. It was a site to witness.

My favorite part of this city though was Old Montreal. It reminded me of a medieval version of Times Square. Imagine thousands of people from every part of the world roaming one area. Venders sold snacks, toys, and souvenirs. Street performers entertained the crowds. Bars were pumping every genre of music. This seemed to go on 24 hours a day. I walked into a bar playing mostly 90s and early 00s hip-hop and R&B. I kept trying to leave but the DJ was playing all my favorite tunes. The bartender was looking at me like “how does this guy know the lyrics to every single song?”. I was in my element.

On my last full day in Montreal I met up with my friend Valerie, a local, who showed me around the city. The first stop was the Olympic Stadium. This is where athletes like Bruce Jenner and John Naber won gold medals during the Summer Olympics of 1976. This is worth seeing for the panoramic views from the top and the history you’d learn. Once we left the stadium, it was time to get ice-cream. We went to a Vietnamese spot called Kem CoBa. No exaggeration, this was the best ice-cream I’ve ever had in my entire life. The long line in the blistering sun was worth the wait. Valerie and I then walked for miles through the residential neighborhoods before she had to leave for work. We kissed on both cheeks, which is customary in Quebec culture, and went our respective ways.

Thank you Montréal, Canada for making my birthday so memorable.

I have a passion for travel so this is the majority of what I write about. It's a collection of stories from my past and present travel adventures. It's an unfiltered look at my experiences traveling the world as a young, black man.

Puerto Rico was the most unexpected of the trips I’ve taken. It wasn’t a thought in my mind moments prior to me booking a flight there. I was browsing through my Twitter feed on a Tuesday afternoon when I saw a Spirit Airlines tweet saying all flights are 90% off but you must book within 24 hours. I was skeptical because of the terrible things I’ve heard about that airline but I checked it out anyway. With the discount, I priced a round trip flight to Puerto Rico for $100! I couldn’t pass that deal up and booked it almost immediately. I booked my stay at a hostel style Airbnb run by two sisters. 5 days later, on a sunny day in March of 2016, I landed on the beautiful Caribbean island.