The journey has been full of highs and lows of all sorts – of grand adventures, heartbreak, self-discovery, screw ups, and lonely roads. I wouldn’t change any of it. While I’m no longer traveling full-time anymore and I am now based in the wonderland that is Mexico City, you’re more likely to find me in some far-off place than at home. I’m a firm believer in the law of attraction, and I hope my stories inspire you to take the leap and follow your dreams!

Despite it being a relatively small country, Germany has many of the most beautiful destinations in Europe.

Known for its Alps and castles, which no doubt take the cake, Germany also boasts some amazing towns and cities. Below is a list of some amazing spots in Germany to include in your itinerary.

A day trip is enough to appreciate the beauty of Rothenburg, but a stayover is a good idea as there are several quirky museums such as the Doll Museum, the Christmas Museum, and the Craft House!

Set on the edge of the Elbe River, Hamburg looks like any regular port town, but in reality, it is much more than that! Hamburg is a hub for science, arts, and culture. A must in this city is Miniature Wonderland, a model railway that takes visitors on “a trip around the world”.

This is a destination that should be included in any European itinerary. It is so beautiful and special that it honors Lotto King Karl’s famous hymn dedicated to Hamburg, his pearl.

A visit to Nuremberg is like a trip back to the 15th century. This old town is filled with medieval houses, gothic churches, cobblestoned alleys, and historical structures.

The star of the show is Nuremberg Castle. Perched on a sandstone cliff that overlooks the city, this castle dates back to the Holy Roman Empire. Visitors can explore its underground tunnels and climb up to get amazing panoramic views of the town and its surroundings.

Heidelberg is another fairytale-like spot in Germany. An impressive castle, winding alleys, ancient bridges, and local breweries are the landmarks of this stunning German city.

Heidelberg is also the gateway to the stunning Black Forest, so it’s fantastic for those who love history but also want a good dose of nature! 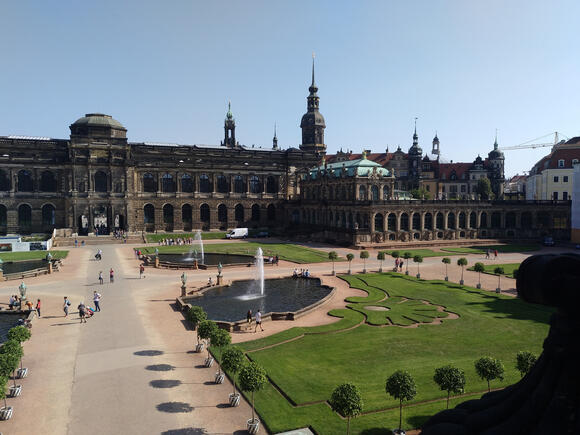 Dresden has something for every type of traveler.

For history buffs, the city’s old town hosts many amazing historical buildings. For nature lovers, Saxon Switzerland National Park is only a short drive away. And for the artsy types, there is Dresden's Opera House.

A list of the prettiest cities in Germany would not be complete if it didn't include Munich. There are many valid reasons why all visitors fall hard for this spot. Nestled in the Alps, Munich hosts picture-perfect castles, unique Bavarian culture, and killer museums.

The state of Bavaria has its own particular culture, which explains why Munich and its surrounding villages often host quite unique events and festivities, including the world-famous Oktoberfest!

The journey has been full of highs and lows of all sorts – of grand adventures, heartbreak, self-discovery, screw ups, and lonely roads. I wouldn’t change any of it. While I’m no longer traveling full-time anymore and I am now based in the wonderland that is Mexico City, you’re more likely to find me in some far-off place than at home. I’m a firm believer in the law of attraction, and I hope my stories inspire you to take the leap and follow your dreams!

Utah is the perfect place for nature lovers, and one of the best destinations in the USA for waterfall buffs. A road trip through this state is a must if beautiful landscapes and roaring falls are your thing.

Utah is easily one of the best states in the USA for nature lovers. Whether you're into hikes or scenic drivers, Utah has some awesome parks that are worth checking out. Canyonlands is surely one of the best national parks to visit for those who want to dive deep into the Moab Desert.

It’s no secret that Mexico loves colors and proof of that can be appreciated in many narrow alleys in lots of its towns and cities. While many travelers choose to visit Mexico because of its fantastic beaches, others prefer to explore its somewhat underrated destinations of culture and vivid colors. If the latter seems appealing to you, check out this list of colorful cities in Mexico.

When thinking of Mexican beaches, the first places that come to mind are the Riviera Maya and Cabos, luxury resorts, and hotels. Well, yeah, they are awesome and surely not to be undermined, but there are also some fantastic lesser-visited beach destinations in Mexico that well deserve a visit.

Berlin is a city full of life. Its killer nightlife, artsy vibes, and an unbeatable foodie scene make it quite difficult to decide what to do if you only have a day or two to enjoy the German capital.

National Parks You May Have Never Heard Of

The USA has countless national parks, all of which are incredible to visit and a must in any travel bucket list. While many of them are quite famous, there are plenty that are much lesser known and blessedly still remain free of big crowds. Among the latter, there a few real gems that are well worth a visit.

If you think the Miami area is limited to sandy beaches, fun bars, and parties, think again. There are several great national parks that provide fabulous getaways from this coastal city, and below you’ll find three great options for adventurous getaways.

Amazing National Parks in the East Side of the USA

Yearning for an adventure in the midst of nature? Whether you’re into cave hunting, hiking, scenic drives, or wildlife spotting, the east coast has got you covered with several stunning national parks.

Kenya is a country so full of varied landscapes and cultural worlds that it’s not easy to decide what to include in an itinerary. Below is a list of five destinations that should definitely be included in any adventurous traveler’s bucket list.

It is quite impossible to experience everything that San Francisco has to offer in one visit. There is just too much to do and see in this cultural hub that boasts enchanting architecture, steep hills, and spectacular views. Below you will find some suggestions to make the most of this destination.

Tromso: One of the Best Destinations to See the Northern Lights

How To Recycle Clothes For Money

Threadbare jeans, fat clothes, shrunken sweaters, and faded t-shirts lurking in the back of closets and drawers can all find new life while earning dividends. It’s time to clean the closet. Sorting through what to keep, what to trash, and what to relegate to the Good Will bag can be a time-consuming challenge.

Fun Ways To Spice Up Your Coffee

Coffee is the breakfast of champions for many folks all over the world. For some, nothing beats the smell of freshly brewed coffee first thing in the morning, and we’re right there with you!

Stunning shrines, endless rice fields, palm-fringed beaches and the best street food in the world are just a few of the staples that make Thailand such a sought-after destination. If you're currently planning a trip to the Land of Smiles and still find yourself unsure of where to go, here are just a few of the best destinations in Thailand that can't miss from your itinerary!

Whether you’re into beach bumming or a more adventurous type, these destinations will fulfill your heart’s desire. without seriously hurting your wallet!. Surrounded by endless mountains and featuring more than 300 Buddhist temples, Chiang Mai’s laid-back atmosphere invites visitors to explore the Thai culture and the ancient history of the Lanna Kingdom while savoring delicious dishes and enjoying the night markets that line the Pin River. Exploring the city’s lush mountainous outskirts is another perk for adventurous hearts.

Made up of over 18,000 islands, Indonesia is the largest archipelago in the world. Here’s a look at the best places to visit in Indonesia both for travelers seeking relaxation and those who are looking to catch some adventure.

Craving for an adventurous but also relaxing and luxurious getaway? If you dream of being enfolded by nature while watching wild animals stroll by your hotel, check out this list of dreamy hotels where your wildest dreams can come true!

Top Spots to Visit in Spain this Summer

For those looking for a country in Europe that has it all, Spain is without a doubt the one!. Summer-perfect beaches, huge mountain ranges, a rich cultural scene, delicious cuisine, and a killer party scene make Spain a favorite for all types of travelers.

Coolest Spots In The World To Go Glamping

The word glamping is a combination of the words “glamour” and “camping”. So, glamping is a way of experiencing camping life in a glamorous style. This new lodging concept is taking off all over the world and splendidly blending the outdoor life with deluxe accommodations..