A witness had come forward in 1989 claiming that Alice Holtz, Ronald’s ex-wife, had confessed to the murder. To the witness, Alice described the killing in detail, admitting she had shot him while he was asleep. She discarded his body in the abandoned mine shaft.

In September of 1974, Alice Uden, at the time Alice Prunty, married her third husband Ronald Holtz, but she filed for divorce only five months later. Mysteriously, Holtz could not be located and was never served the divorce paperwork, therefore the divorce was granted in his absence. The last time Ronald had ever been seen was by his family at Christmas time in Sheridan, Wyoming. They never heard from him again.

Alice married her fourth husband, Gerald Uden, in Wyoming in 1976. Gerald had also been married before, to a woman named Virginia in 1974. Virginia had two children from a previous marriage and Gerald officially adopted the boys as his own in 1975.

Although Gerald said he was in love with Virginia she filed for divorce only six weeks after he adopted her children. Over the next two years, Gerald met and married Alice Holtz.

In September of 1980, after stopping by to visit Virginia’s mother, Claire Martin, the young woman, and her children disappeared. Virginia, 32, and her sons, 11-year-old Richard and 10-year-old Reagan, left Claire’s home in Lander, Wyoming never to be seen again. Virginia told her mother that they were meeting up with Gerald as he had planned to take them hunting.

As Claire searched for her family, she started receiving strange correspondence, including a phone call from an anonymous woman claiming her daughter and grandchildren were in Illinois. Additionally, a mailgram was delivered to her home which alleged that the missing trio was in New Jersey.

Only a few days later, the family’s station wagon was found abandoned, pushed into a ravine in order to conceal its location. Law enforcement discovered evidence that someone had attempted to set it on fire. Blood matching Virginia’s blood type was inside the back of the vehicle, but the victims’ bodies were not found.

In 2013, over thirty years later, Ronald Holtz’s remains were finally unearthed from deep inside the Remount Ranch mine shaft, just as the witness had claimed back in 1989. Alice and Gerald Uden, both in their 70's, were taken into custody and charged for the cold case slayings; Alice for the murder of her late husband, Ronald Holtz, and Gerald for the deaths of Virginia, Reagan, and Richard. 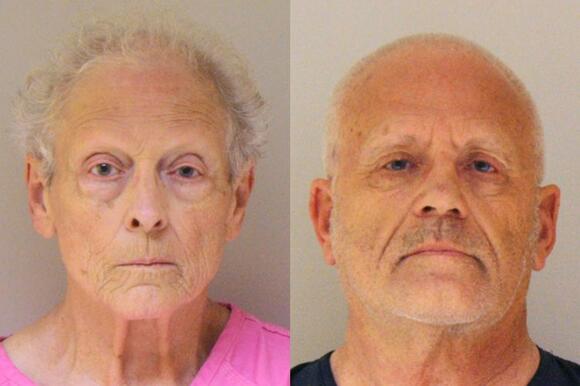 Gerald and Alice were living together in Chadwick, Missouri at the time of their arrests. Neighbors said the Uden’s had lived a peaceful and normal life in Missouri, raising two children and attending church services. They were dumbfounded to find out the truth about the couple’s horrific past.

When questioned about the murders, Gerald disclosed to investigators how he had taken his wife and sons to the corner of Williams Road and Tunnel Hill Road in Fremont County where he waited for them to exit the vehicle killing them. He admitted to planning the crimes at least four years in advance.

Finally, he confessed to first disposing of the bodies in a remote mine shaft, but later retrieving them. He then sealed his wife and adopted children into steel drums before throwing them off of the side of his boat into Fremont Lake.

The murder weapon and the victims’ remains have never been found.

For his crimes, he was sentenced to life in prison. He said he had no explanation for why he killed his family other than he felt Virginia had become intolerable, claiming she was driving a wedge between him and Alice. Frustrated that Virginia would not allow him to see the boys without her being present, he decided he’d had enough.

While being questioned about the murder of Ronald Holtz, Alice was confronted with the witness statement, but she initially tried to deny ever marrying Holtz. DCI agents pressed for more information until she finally cracked. She was sentenced to life in prison in 2014.

After Alice Uden’s death in incarceration in 2019, Gerald transferred the blame for the killings of Virginia and her sons onto his late wife. Although he pleaded guilty in 2014 to murdering his three family members, he changed his story after Alice died, possibly in an attempt at exoneration and release from prison. He remains housed at the Wyoming Medium Correctional Institution where he is serving three life sentences for murder and still believes he was wrongfully convicted.

It is unclear whether Fremont Lake has ever been extensively searched for the bodies of Virginia, Reagan, and Richard. Heartbreakingly, it’s probable they could still be resting somewhere at the bottom.