Corey Schmidt is a Local Journalism Fellow for NewsBreak. He is currently pursuing his undergraduate degree at DePaul University studying music performance and communication & media. His work can be found in Milwaukee Magazine, South Side Weekly, Door County Knock, 14 East Magazine and the DePaulia 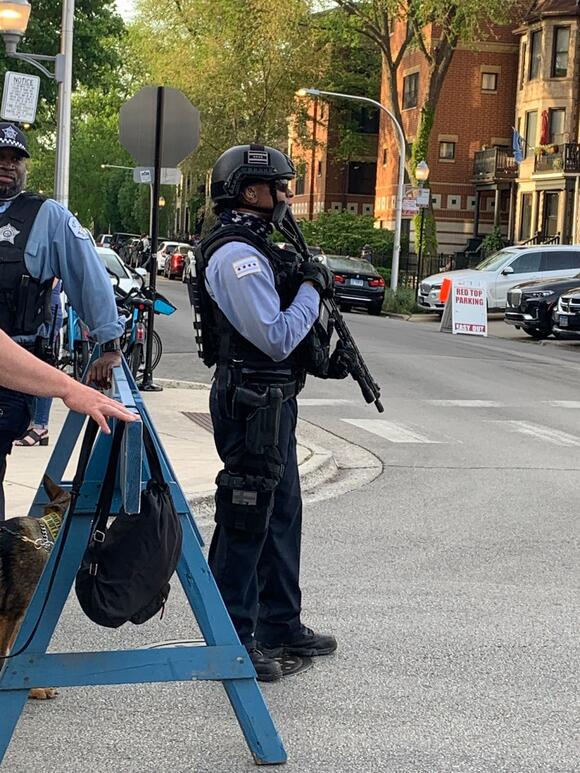 A Chicago Police Officer carrying a large weapon on duty outside a Chicago Cubs game.Corey Schmidt/NewsBreak

This past year, the Chicago Police Department has taken a public perception hit in regards to their conduct. Many community activists, including Chicago’s chapter of the Black Lives Matter Movement, have commented on the department's use of reckless and unnecessary force.

As the weather starts to get warmer and the flowers start to bloom, it often means a time of active political activism and protests in Chicago. The city has already seen large protests this spring after the police-involved shooting of 13-year-old Adam Toledo and in response to Israel's attacks on Palestine.

The first large Chicago protest of 2021 took place on April 16 when protesters gathered in Logan Square seeking justice for Adam Toledo. Toledo was fatally shot by a Chicago Police Department officer. What started as a peaceful protest with musicians playing and a large, peaceful crowd turned violent.

According to a tweet by Block Club Chicago reporter Colin Boyle, the protest was peaceful for approximately five hours before things eventually took a turn. During the course of the night, several arrests were made — including Anthony McCullom III, the son of Black Lives Matter Chicago Executive Director Amika Tendaji — and physical altercations involving and sometimes initiated by CPD officers took place.

“The cop...started tossing me as I was leaving upon order,” Boyle tweeted. “I was pushed to the ground and that broke my camera lens hood.”

When the protest started, musicians were playing and activists spoke for love and unity, calling to put an end to police brutality, specifically against people of color. However, as the night went on CPD officers grew in numbers eventually bringing in riot police.

“The mood here dramatically shifted when riot police showed up,” Jonathan Ballew, a freelance journalist present at the protest, tweeted.

A Healing Every Revolutionary Chicago (H.E.R. Chicago) organizer, identified as AJ, was caught up with CPD officers. They suffered from a minor concussion and have experienced three seizures since the protest, according to H.E.R. Chicago.

On the other hand, CPD officers felt threatened by protesters, even thinking that canned food would be used as a weapon against them.

“There's a large stack of canned food at Wrightwood at Central Park, not sure if they're for the homeless or weapons against us,” an officer said over the police scanner.

The presence of the CPD has been forceful in protests like the one in April, but also at events like Chicago Cubs games. Police officers are seen patrolling the outside area of Wrigley Field carrying assault rifles to control a seemingly orderly crowd. CPD officials believe that the use of these weapons are necessary as part of their crowd control efforts at Wrigley Field.

“We cannot answer for the Cubs but we are responsible for the safety and security of citizens on the public way for all major events in the City of Chicago,” Thomas Ahern, deputy director of news affairs & communications for the Chicago Police Department, wrote in an email.

Corey Schmidt is a Local Journalism Fellow for NewsBreak. He is currently pursuing his undergraduate degree at DePaul University studying music performance and communication & media. His work can be found in Milwaukee Magazine, South Side Weekly, Door County Knock, 14 East Magazine and the DePaulia