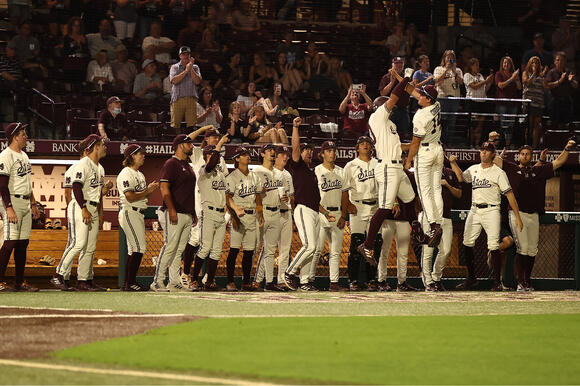 Freshman pitcher Cole Cheatham started for the Bulldogs and allowed four runs on five hits with one strikeout and one walk in two-thirds of an inning. Senior Drew Talley (1-1) replaced him and earned the win after allowing just two hits in 2 1⁄3 innings. Senior Cam Tullar then allowed two hits in three innings with four strikeouts before sophomore Mikey Tepper pitched the final two innings.

The Lions used seven pitchers in total for the game. Sophomore Jacob Bradshaw (1-8) started and was charged with the loss after allowing seven runs on three hits with one strikeout and five walks in one inning pitched.

North Alabama jumped out to a 4-0 lead in the top of the first inning. Senior Luke Harper hit a leadoff single up the middle and advanced 90 feet on a wild pitch. A flyout pushed him over to third before he scored on Homan’s RBI single up the middle. Senior Devne Daniel then walked, and Hudson followed with an RBI single to left field before a single by senior Reid Singewald loaded the bases. After a strikeout, junior Peyton Thomas hit a two-RBI single.

MSU responded with seven runs in the bottom half of the first. Yeager, senior Luke Hancock and freshman Hunter Hines drew walks to load the bases. Cumbest’s fielder’s choice plated Yeager, and he moved up to second on a wild pitch. Two more runs scored on sophomore Kellum Clark’s double down the left-field line. After James and graduate student Jess Davis drew walks to reload the bases, sophomore Lane Forsythe hit a three-RBI double to right-center field. Yeager then plated Forsythe with an RBI single to right field to give the Bulldogs a 7-4 lead.

The score remained the same until the bottom of the fifth inning when the Bulldogs added one run to their lead. Clark drew a one-out walk to start things and Davis was hit by a pitch to put two runners on with two outs. Forsythe drew a walk to load the bases before Yeager drew a bases-loaded walk to put MSU ahead 8-4.

The bottom of the sixth inning began with a leadoff single by junior Logan Tanner and a double to left-center by Hines to put runners on second and third. Cumbest followed with a three-run home run to left-center. Clark then walked and James singled through the left side. After back-to-back strikeouts, Yeager singled to load the bases and Hancock hit a two-RBI single up the middle to make it a 13-4 ballgame.

James walked to begin the bottom of the eighth inning before senior Brayland Skinner doubled to left field. Senior Tanner Leggett was then walked, and Yeager scored James with an RBI sacrifice fly to end the game’s scoring at 14-4.

OXFORD, Miss. — The Mississippi State baseball team cranked out 18 hits en route to a 10-7 win over Ole Miss Friday night at Swayze Field to even the three-game series. The Bulldogs (23-17, 7-10 SEC) erased a 4-1 deficit by scoring the next nine runs to take a 10-4 lead in the top of the eighth inning. The Rebels (22-16, 6-11 SEC) scored three runs in the bottom half of the eighth, but MSU held on to force a rubber match.

OXFORD, Miss. — Mississippi State gave up a three-run home run to Ole Miss in the bottom of the first inning, and that proved to be the difference as the Bulldogs fell to the Rebels 4-2 Thursday night at Swayze Field in the first game of the three-game Southeastern Conference series.