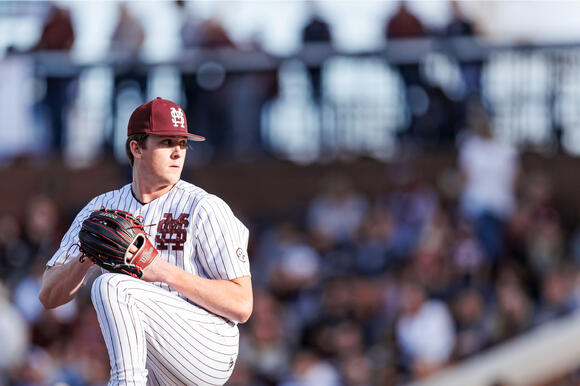 MSU was outhit 8-5 and sophomore Kellum Clark was the lone Bulldog to record multiple hits as he finished 2-for-3 with one RBI and one run. Senior Luke Hancock was 1-for-5 and accounted for two RBIs on a two-run home run.

The Bulldogs took a 1-0 lead in the top of the first inning when junior Kamren James drew a one-out walk, made his way to third base on two more walks by Smith and scored on Clark’s sacrifice fly.

The Razorbacks responded with four runs in the bottom of the second inning to take a 4-1 lead. Junior Robert Moore, graduate student Braydon Webb and Slavens drew a trio of walks to load the bases with one out. A fielder’s choice plated Moore before a hit batter reloaded the bases. Wallace followed with a two-RBI single to left field before another hit batter followed. The fourth run of the inning came on a wild pitch.

In the bottom of the third inning, graduate student Chris Lanzilli and Moore drew back-to-back walks. Webb then grounded into a double play, but Lanzilli advanced to third. Slavens followed with a two-run home run before senior Jalen Battles singled to center field and advanced to second on a walk. Wallace’s double to left-center field scored two runs and made it an 8-1 ballgame.

Back-to-back solo home runs from Lanzilli and Moore pushed Arkansas’ lead to 10-1 in the bottom of the fourth inning.

With one out in the bottom of the sixth inning, Moore was hit by a pitch and scored on Slavens’ doubled to left-center to increase the Razorbacks’ lead to 12-3.

Corder drew a one-out walk in the top of the seventh inning and scored when sophomore Lane Forsythe singled and the right fielder misplayed the ball to cut the deficit to 12-4.

In the top of the eighth inning, Clark singled to left, stole second and scored when senior Brad Cumbest’s popup at the plate was botched to end the game’s scoring at 12-5.

The Bulldogs will look to avoid being swept on Sunday at 2 p.m. CT on SEC Network+.