Mississippi State baseball stymied in 8-1 loss to No. 2 Arkansas 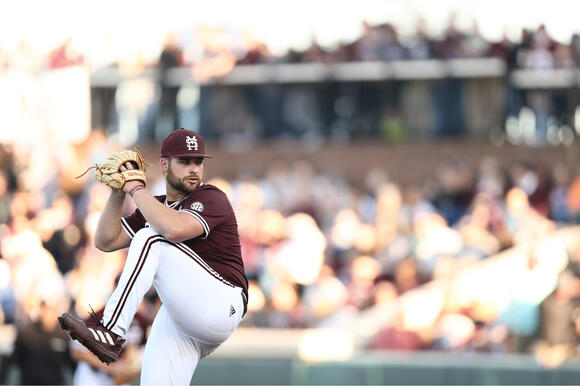 FAYETTEVILLE, Ark. — Mississippi State was held to just four hits, committed three errors and fell behind early in Friday’s 8-1 loss to No. 2 Arkansas in the opening game of a three-game series at Baum-Walker Stadium.

Junior Logan Tanner led MSU with a 2-for-4 night at the plate with one RBI and one run on a home run. Sophomore Kellum Clark and graduate student RJ Yeager both recorded one hit. The Razorbacks had eight hits and were led by senior Jalen Battles with two hits, three RBIs and two runs, while sophomore Cayden Wallace was 2-for-5 with two runs.

Junior starting pitcher Preston Johnson (2-2) was charged with the loss for the Bulldogs after allowing seven runs on seven hits with seven strikeouts and five walks in four innings. Freshman Cole Cheatham then pitched 1 2⁄3 scoreless innings and allowed zero hits with one strikeout and four walks. Senior Drew Talley pitched the final 2 1⁄3 innings and allowed one run on one hit with one strikeout and two walks.

After a scoreless first inning, the Razorbacks scored six runs on five hits to take a 6-0 lead. Graduate student Braydon Webb led off by drawing a walk. A strikeout followed before Battles homered to left field. Wallace hit a two-out single and advanced to second on a throwing error. Freshman Peyton Stovall then drew a walk before Wallace scored on graduate student Michael Turner’s RBI single through the right side. An RBI single by graduate student Chris Lanzilli and a two-RBI triple by junior Robert Moore rounded out the six-run inning.

Battles’ second home run of the game came in the bottom of the third inning to give Arkansas a 7-0 lead.

MSU got on the board in the top of the fourth inning when Tanner homered to left field to make it a 7-1 ballgame.

In the bottom of the seventh inning, Wallace hit a leadoff double to left field. A flyout followed before he stole third base. Turner’s sacrifice fly plated him to make it 8-1 and end the game’s scoring.

The Bulldogs and Razorbacks play Game 2 Saturday at 6:30 p.m. CT on SEC Network+.