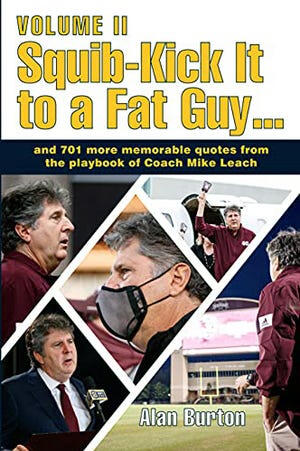 Alan Burton released his second book on the most interesting coach in college football.Courtesy photo

The book, which is titled, “Volume II of Squib-Kick It to A Fat Guy … and 701 more memorable quotes from the playbook of Coach Mike Leach,” can be found online at Amazon and Barnes & Noble.

Burton, a 1979 graduate of Texas Tech University, where he earned a bachelor of arts degree in English, has written eight books about Texas celebrities, sports and music quotes and a history of college football radio broadcasting in Texas. He currently serves as the assistant to the president and director of university communications at Southeastern Oklahoma State University.

Burton said his decision to write a second book about Leach stems from the fact that Leach is the most interesting coach in college football.

“I think he is the most interesting coach in college football because of his Air Raid offense and unique press conferences,” Burton said. “In these days of political correctness, he is just the opposite, which is refreshing to me. I think he says a lot of things that other coaches would like to say but are afraid to. You might say Leach is brutally honest in talking about his players, coaches, officiating, whatever. Bottom line, he makes the game more interesting.”

In this volume, you will read about Leach’s views on a number of subjects, including music, his players’ lack of effort, his unique training methods, his disagreements with the media, his clashes with technology and certain Texas Tech officials and a chapter that challenges the imagination that is simply titled, “Hemingway, Hot Dogs and Aliens.’’

Burton said he hopes people gain “an appreciation that Leach is more than just a football coach, but a highly intelligent individual with a unique background and philosophy that works for him.” “Bottom line, after reading the book, I would hope people would say they enjoyed it and also learned something from it,” he said.

As for Leach and the Bulldogs, they finished the regular season 7-5 with a 4-4 record in Southeastern Conference play and are preparing for the Liberty Bowl on Dec. 28 against Texas Tech. Burton said he likes what Leach is doing at Mississippi State and that the Bulldogs could have had a much better record had things gone their way.

OXFORD, Miss. — The Mississippi State baseball team cranked out 18 hits en route to a 10-7 win over Ole Miss Friday night at Swayze Field to even the three-game series. The Bulldogs (23-17, 7-10 SEC) erased a 4-1 deficit by scoring the next nine runs to take a 10-4 lead in the top of the eighth inning. The Rebels (22-16, 6-11 SEC) scored three runs in the bottom half of the eighth, but MSU held on to force a rubber match.

OXFORD, Miss. — Mississippi State gave up a three-run home run to Ole Miss in the bottom of the first inning, and that proved to be the difference as the Bulldogs fell to the Rebels 4-2 Thursday night at Swayze Field in the first game of the three-game Southeastern Conference series.