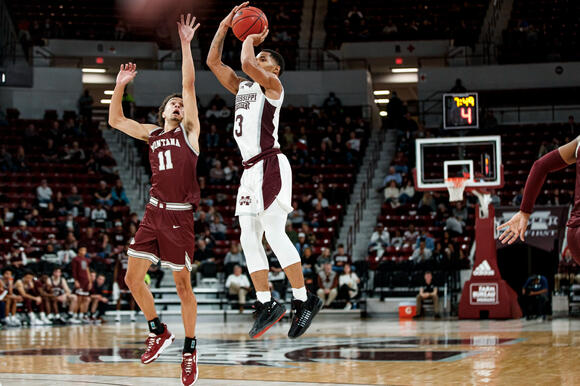 STARKVILLE, Miss. — The Mississippi State men’s basketball team will conclude its four-game homestand to begin the 2021-22 season on Sunday when the Bulldogs host Morehead State at 2 p.m. CT inside Humphrey Coliseum.

The Bulldogs (3-0), who have won their first three games by double figures, are coming off a 77-64 win over Detroit Mercy on Wednesday. Junior guard Iverson Molinar and sophomore guard Shakeel Moore scored 19 points apiece to lead MSU.

The MSU defense has held opponents to 34.5% shooting, which ranks second in the Southeastern Conference. MSU has also allowed just 54 points per game, which ranks third in the league.

Forward Johni Broome, who was the Ohio Valley Conference freshman of the year last season, leads the Eagles with 13.3 points and 11.3 rebounds per game.

Junior guard Skyelar Potter has averaged 11 points and six rebounds, while graduate guard Tray Hollowell is putting up 10.8 points per game and has made a team-high nine 3-pointers.

Sunday’s game marks the sixth meeting between the Bulldogs and Eagles on the hardwood. MSU has won all five previous meetings, most recently an 85-76 win on Dec. 22, 2016.

Cincinnati made history Tuesday night when it became the first team from a Group of Five conference to enter the College Football Playoff selection committee’s top four. Oregon's 38-7 loss to then-No. 23 Utah allowed the Bearcats to move up a spot from No. 5, while Oregon is now ranked No. 11 and Utah is now ranked No. 19. Cincinnati is behind No. 1 Georgia, No. 2 Ohio State and No. 3 Alabama.

STARKVILLE, Miss. — The No. 25 Mississippi State football team will look to keep things rolling on Saturday when it faces the Tennessee State Tigers at 11 a.m. CT inside Davis Wade Stadium. The game can be watched on SEC Network+.

STARKVILLE, Miss. — The Mississippi State men’s basketball team will be back in action Wednesday at 7 p.m. CT when it welcomes the Detroit Mercy Titans to Humphrey Coliseum. The game can be watched on SEC Network+.

The top seven teams remained unchanged in the College Football Playoff’s third rankings of 2021 season, which were released on Tuesday. Georgia, Alabama, Oregon, Ohio State, Cincinnati, Michigan and Michigan State all won this past weekend, so there was no change in the selection committee’s top seven.

STARKVILLE, Miss. — The Mississippi State men’s basketball team dominated Montana from start to finish en route to an 86-49 win Saturday night inside Humphrey Coliseum. With the win, the Bulldogs improve to 2-0, while the Grizzlies fall to 1-1.

Rogers leads Mississippi State to 43-34 come-from-behind win at No. 17 Auburn

AUBURN, Ala. — Trailing 28-3 in the second quarter, Mississippi State scored 40 unanswered points to beat No. 17 Auburn 43-34 on Saturday at Jordan-Hare Stadium. With the win, the Bulldogs improve to 6-4 (4-3 SEC) and become bowl eligible for the 12th straight season. The win also marks the largest come-from-behind victory in Mississippi State history. Head coach Mike Leach is now tied with Emory Bellard for the school record of four wins over an Associated Press Top 25 team away from home. The Tigers fall to 6-4 (3-3 SEC) with the loss.

Mississippi State looks to get back on track at No. 17 Auburn

AUBURN, Ala. — The Mississippi State football team will have another chance to become bowl eligible on Saturday when it takes on the No. 17 Auburn Tigers at 11 a.m. CT at Jordan-Hare Stadium on ESPN.

STARKVILLE, Miss. — Graduate transfer forward Garrison Brooks scored a game-high 18 points in his Mississippi State debut and the Bulldogs used a late 15-0 run to secure a 75-49 season-opening win over the North Alabama Lions on Wednesday night at Humphrey Coliseum.

Barbara J. Perenic/Columbus Dispatch/USA TODAY NETWORK. No. 3 Oregon, No. 4 Ohio State and No. 5 Cincinnati all moved up one spot behind No. 1 Georgia and No. 2 Alabama in the second edition of the College Football Playoff rankings of the 2021 season, which were released Tuesday night.

STARKVILLE, Miss. — The Mississippi State men’s basketball team will begin the 2021-22 season on Wednesday as it hosts North Alabama at 7 pm. CT at Humphrey Coliseum. The contest can be streamed on SEC Network+.

FAYETTEVILLE, Ark. — Arkansas sophomore running back Dominique Johnson scored a go-ahead touchdown with 21 seconds left as Arkansas came away with a 31-28 win over No. 17 Mississippi State on Saturday at Donald W. Reynolds Razorback Stadium.

No. 17 Mississippi State ready for road game against Arkansas

FAYETTEVILLE, Ark. — The No. 17 Mississippi State football team is set to take on the Arkansas Razorbacks at Donald W. Reynolds Razorback Stadium on Saturday at 3 p.m. CT on SEC Network.

Georgia, Alabama, Michigan State and Oregon claimed the top four spots in the initial College Football Playoff rankings of the 2021 season, which were released Tuesday night. Just on the outside of the top four are Ohio State at the fifth spot and unbeaten Cincinnati at the sixth spot. The Bearcats have the best ranking ever in the selection committee’s Top 25 for a Group of Five program.

Nick King/Lansing State Journal/ USA TODAY NETWORK. Michigan State jumped up to No. 5 in The Associated Press college football poll, which was released Sunday, while Mississippi State is unranked despite beating then-No. 12 Kentucky 31-17.

STARKVILLE, Miss. — Mississippi State sophomore quarterback Will Rogers completed 36 of 39 passes for 344 yards and one touchdown and the MSU defense had four takeaways as the Bulldogs defeated No. 12 Kentucky 31-17 on Saturday at Davis Wade Stadium.