Bulldogs set for showdown at No. 15 Texas A&M 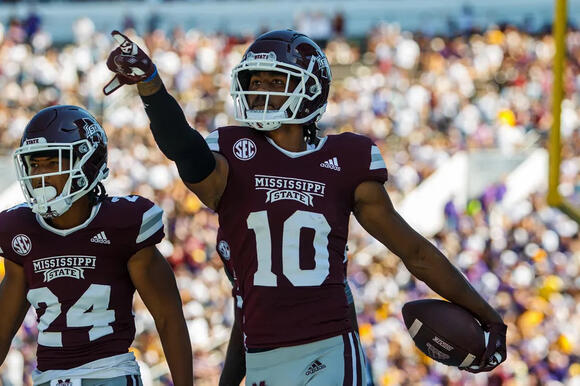 COLLEGE STATION, Texas — The Mississippi State football team is set to face No 15 Texas A&M on Saturday at 6 p.m. CT at Kyle Field. The game will air on SEC Network.

The Bulldogs (2-2, 0-1 SEC) are coming off back-to-back close losses to Memphis and LSU and will be looking to get on track.

MSU and Texas A&M are meeting for the 15th, with the all-time series tied 7-7. The Bulldogs have lost the last two matchups against the Aggies.

Last week, the Bulldogs fell 28-25 to LSU. Sophomore quarterback Will Rogers completed 47 of 62 passes for 371 yards, three touchdowns and one interception. On the year, Rogers has thrown for 1,454 yards and 11 touchdowns. He is leading the Southeastern Conference and is ranked third in the nation in yards passing. Rogers has also thrown 11 touchdown passes, which is tied for eighth in the nation.

Redshirt sophomore wide receiver Makai Polk leads the Bulldogs with 304 yards receiving on 33 catches with two TDs. No. 2 on the team is redshirt senior Austin Williams, who has made 20 catches for 211 yards receiving and one TD.

The Aggies (3-1, 0-1 SEC) are coming off a 20-10 loss to then-No. 16 Arkansas. Texas A&M redshirt sophomore QB Zach Calzada struggled in that game in his second start since redshirt freshman QB Haynes King broke his leg. Calzada threw for just 151 yards and also threw an interception. He ranks last in the SEC with a 52.8 % completion percentage.

MSU’s defense ranks 98th in the nation in allowing 252.5 yards passing per game, so that is a key matchup to watch in the game.

Junior running back Isaiah Spiller has been the Aggies’ most consistent player on the offensive side of the ball this season. He has carried the ball 52 times for 345 yards rushing and two TDs. He ranks sixth in the SEC in averaging 86.3 yards per game and 6.6 per rush. The Bulldogs are allowing just 71.3 yards rushing per game, which ranks eighth in the nation.

Tom Hart (play-by-play), Jordan Rodgers (analyst) and Cole Cubelic (reporter) will be on the call.

STARKVILLE, Miss. — Mississippi State football’s 12th consecutive bowl appearance will be a battle against the Texas Tech Red Raiders in the AutoZone Liberty Bowl on Dec. 28 at 5:45 p.m. CT at Liberty Bowl Memorial Stadium in Memphis, Tennessee. The game will be televised on ESPN.

STARKVILLE, Miss. — Mississippi State junior guard Iverson Molinar scored a career-high 26 points, but it was the visiting Minnesota Golden Gophers who came away with an 81-76 win Sunday afternoon at Humphrey Coliseum.

STARKVILLE, Miss. — The Mississippi State basketball team is set to host the Lamar Cardinals on Thursday at 7 p.m. CT inside Humphrey Coliseum. The game will be airing on SEC Network+.

Michigan moves to No. 2 in CFP rankings, joining Georgia, Alabama and Cincinnati in top 4

The Michigan Wolverines beat rival Ohio State for the first time in 10 years to move up from No. 5 to No. 2 in the latest College Football Playoff rankings, which were released Tuesday night.

Cincinnati made history Tuesday night when it became the first team from a Group of Five conference to enter the College Football Playoff selection committee’s top four. Oregon's 38-7 loss to then-No. 23 Utah allowed the Bearcats to move up a spot from No. 5, while Oregon is now ranked No. 11 and Utah is now ranked No. 19. Cincinnati is behind No. 1 Georgia, No. 2 Ohio State and No. 3 Alabama.

STARKVILLE, Miss. — The No. 25 Mississippi State football team will look to keep things rolling on Saturday when it faces the Tennessee State Tigers at 11 a.m. CT inside Davis Wade Stadium. The game can be watched on SEC Network+.

STARKVILLE, Miss. — The Mississippi State men’s basketball team will be back in action Wednesday at 7 p.m. CT when it welcomes the Detroit Mercy Titans to Humphrey Coliseum. The game can be watched on SEC Network+.

The top seven teams remained unchanged in the College Football Playoff’s third rankings of 2021 season, which were released on Tuesday. Georgia, Alabama, Oregon, Ohio State, Cincinnati, Michigan and Michigan State all won this past weekend, so there was no change in the selection committee’s top seven.

STARKVILLE, Miss. — The Mississippi State men’s basketball team dominated Montana from start to finish en route to an 86-49 win Saturday night inside Humphrey Coliseum. With the win, the Bulldogs improve to 2-0, while the Grizzlies fall to 1-1.

Rogers leads Mississippi State to 43-34 come-from-behind win at No. 17 Auburn

AUBURN, Ala. — Trailing 28-3 in the second quarter, Mississippi State scored 40 unanswered points to beat No. 17 Auburn 43-34 on Saturday at Jordan-Hare Stadium. With the win, the Bulldogs improve to 6-4 (4-3 SEC) and become bowl eligible for the 12th straight season. The win also marks the largest come-from-behind victory in Mississippi State history. Head coach Mike Leach is now tied with Emory Bellard for the school record of four wins over an Associated Press Top 25 team away from home. The Tigers fall to 6-4 (3-3 SEC) with the loss.

Mississippi State looks to get back on track at No. 17 Auburn

AUBURN, Ala. — The Mississippi State football team will have another chance to become bowl eligible on Saturday when it takes on the No. 17 Auburn Tigers at 11 a.m. CT at Jordan-Hare Stadium on ESPN.

STARKVILLE, Miss. — Graduate transfer forward Garrison Brooks scored a game-high 18 points in his Mississippi State debut and the Bulldogs used a late 15-0 run to secure a 75-49 season-opening win over the North Alabama Lions on Wednesday night at Humphrey Coliseum.

Barbara J. Perenic/Columbus Dispatch/USA TODAY NETWORK. No. 3 Oregon, No. 4 Ohio State and No. 5 Cincinnati all moved up one spot behind No. 1 Georgia and No. 2 Alabama in the second edition of the College Football Playoff rankings of the 2021 season, which were released Tuesday night.