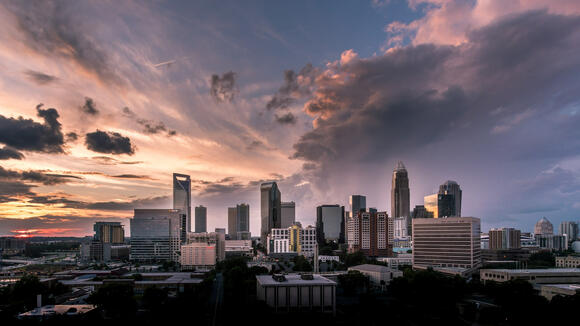 (CHARLOTTE, N.C.) Charlotte residents waking up this morning of Friday, May 27 may wonder to themselves, "Where is the sun hiding?" Clouds will obscure the solar orb for most of the day as temperatures reach a high of 82 and nadir of 60, with more weather in our six-day forecast below.

Before the weekend starts, we inform readers of lockdowns at two uptown Charlotte-Mecklenburg School buildings on Thursday after officials spotted a person wearing body armor and tactical goggles. Hoping to spot more places to safely commute are Charlotte bikers, who will stage a large-scale ride to rally for safer pathways in the next draft of Charlotte's recently released mobility plan.

The Hurricanes only need one win against the New York Rangers to see the third bracket in the Stanley Cup playoffs and our weekend reading list and event guide give readers something to chew on until Monday, which won't have a Roundup due to Memorial Day.

Why it matters: While officers and members of Charlotte's Community Policing Crisis Response Team were quickly able to speak with the individual, who cooperated with them, the extra caution was likely due to Tuesday's school shooting that killed 21 people at Robb Elementary School in Uvalde, Texas. Charlotte police did not state why the person was equipped with the vest or eyewear.

Speaking to Spectrum News, Madison Kreutzer, a junior at East Mecklenburg High School, said CMS holds lockdown drills "constantly" but doubted the effectiveness of such practices "because a lot of these active shooters are students or past students, and they know how these things work."

One problem CMS cannot drill for is weapon possession; police and administrators have collected 28 firearms from students on district campuses since the school year began in August as leaders hope metal detectors can mitigate the issue.

What happened: The first draft of Charlotte's Strategic Mobility Plan that sets future guideposts for how residents will move through the city looks to put cars on the backburner in favor of biking and public transit options.

Released May 20, the 162-page document looks at the way Charlotte has proliferated in size and density since its 18th-century founding to find conclusions about the Queen City's transportation network. A significant aspiration: single-rider vehicles should only account for half the cars on the road by 2040.

The final plan won't go to a vote before City Council until its June 27 business meeting, but before then city leaders are accepting feedback sent to charlottedot@charlottenc.gov and will host a community listening session at noon on Tuesday, with more information at this page.

How Charlotte responded: Charlotte's cyclists are likely to be some of the greatest benefactors in the city's efforts to stamp out carbon emissions, but before that bikers want to make their corridors safer. To that end, groups of bike-mounted Charlotteans are planning on forming a Critical Mass of riders with an event scheduled for 6:30 p.m. on Friday. Possibly a protest, maybe just a gathering, Critical Mass rides have existed since the 1990s to bring awareness to bike safety as commuters turned from cars to cycles. Charlotte's looks to invite rookie riders onto the street circuit in a slow, comfortable fashion.

Interested bikers should gather at The Spoke Easy, a bike shop at 1530 Elizabeth Ave., where "there will be a group of people in the front to man the pace, and then a group of people in the back to make sure no one gets dropped or left behind." That's according to Kevin Raley, a member of Charlotte bike group The FIxed Federation, one of the event's co-sponsors.

3. Can Canes make round 3? Carolina 3-2 against Rangers ahead of away game

The Carolina Hurricanes have the chance to cut their second round in the Stanley Cup playoffs short by beating the New York Rangers on their home ice at Madison Square Garden at 8 p.m. on Saturday. The stadium will likely be packed with 18,000 hockey fans who will learn if the Canes can conquer their playoff-spanning curse of only winning at home and readers can watch on ESPN.

This week's games: The Carolina team failed to net an away victory on Tuesday when the Hurricanes' only goal came off the stick of left wing Teuvo Teräväinen in a 4-1 loss. Skating on their more familiar ice at home, the Hurricanes saw goals from Teräväinen, winger Andrei Svenchnikov and center Vincent Trocheck for a final score of 3-1, Carolina.

What's next: If the Hurricanes are unable to tie a bow on the series on Saturday, they will play their final game at PNC Arena in Raleigh on Monday, though no start time had been announced for the match as of Friday morning.

With Memorial Day on Monday and clear skies in the forecast below, here are a few festivals and one-off events to keep readers occupied until the next Roundup on Tuesday.