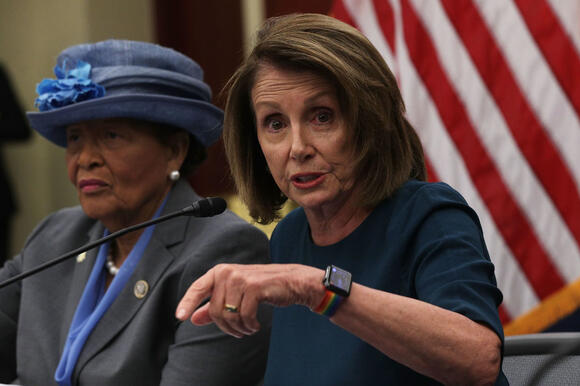 House Speaker Nancy Pelosi and North Carolina Rep. Alma Adams, both Democrats, will no longer be able to enter Russia over a new ban.(Alex Wong/Getty Images)

(CHARLOTTE, N.C.) Good morning, Charlotte, and welcome to one of the last weeks of May! Wednesday of next week kicks of June, but before the start of summer, we have stories for Monday, May 23.

North Carolina lawmakers Ted Budd and Alma Adams are among 963 politicians who are permanently barred from Russia in response to United States sanctions amid the country's war with Ukraine. Speaking of permanent, Charlotte FC forever altered its record with a 2-1 victory over Vancouver's team on Sunday. StarMed Healthcare is looking to oppose the temporary formula shortage with another giveaway slated for this week as Mecklenburg County seeks foster parents.

1. Budd banned: Which NC politicians are no longer allowed in Russia?

What happened: Among the 963 United States residents who received a permanent ban from Russia on Saturday are Republican Rep. Ted Budd and Democratic Rep. Alma Adams of the state's 13th and 12th congressional districts, respectively. Other local Congress members to appear include representatives Dan Bishop, Patrick McHenry and Richard Hudson well as Sen. Thom Tillis, all Republicans.

Why it matters: The list comes in response to economic sanctions imposed by the United States on the Kremlin dating back to late February, when Russia first invaded its neighbor to the west. Since then, the punitive measures have grown to be more encompassing and include additional documents.

Some U.S. politicians have used Saturday's ban as a springboard to restate their stance on the war in Ukraine, with Democratic Rep. Rosa DeLauro tweeting on Sunday that she was "honored" to be ousted from Russia for life.

What's happening: Remember when we reported last week that Charlotte's StarMed Healthcare would be opening up its cache of infant formula for a distribution? After handing out roughly 600 bottles of baby sustenance to residents of the Queen City on May 17, the hospital system plans to do the same on Thursday. Distributions will take place starting at 10 a.m. at the care centers at 4001 Tuckaseegee Rd. and 5344 Central Ave. Suite B and end when the last of the formula has been depleted.

Why it matters: The second event occurs amid a national shortage for the baby-feeding substance, almost a half-ton of which arrived in the United States from Germany on Sunday, per WBAY. While President Joe Biden and his administration devise ways to dilate America's domestic formula stock, North Carolina residents like the Harris family are facing adversity due to their five-month-old son's medical condition, which mandates a specific type of medicinal formula.

Other Charlotteans, including Suzanne Young, are responding to the scarcity with social media, running the CLT Baby Formula Watch Twitter account that posts the addresses of stores carrying formula and when the stock was last seen. Readers who have extra formula at home or spot some of the sustenance substances in the wild can send the name of the store and its address to BabyFormulaCLT@gmail.com to be posted on the page.

What happened: In addition to feeding formula for infants, Charlotte-area welfare organizations are also looking to address a shortage in surrogate caretakers to raise adopted children. Responding to a lack of foster families in the Charlotte area, Mecklenburg County's social services agency will host an adoption event on Tuesday at its Valerie C. Woodard Center on Freedom Drive. Readers who want to learn more about the initiative can call 704-336-5437 or visit this page.

Why it matters: The news follows a relatively slow year for adoption in North Carolina, with only 5,119 children entering foster care during 2020. That's the lowest annual figure since 2012, but Mecklenburg County only has about 100 foster families and 458 unadopted foster children. At a premium are African American and Spanish-speaking families, who are "better reflective of the children that we have in care," according to Mecklenburg County Social Work Supervisor Amy McMahan.

The lack of homes could displace foster kids to neighboring counties, which are also likely to be inundated with adoptable children, per WBTV. Gaston County, directly to Mecklenburg's west, has 50 families to service a stock of 402 foster children, which could be a difficult transition for children who have already experienced hardship.

Speaking of adopting, the Humane Society of Charlotte is looking to hand displaced dogs and cats off to county residents looking to adopt animals once it upgrades to its new, 27,000-square-foot facility by the end of May, The Charlotte Observer reported.

The result of Charlotte FC's Sunday matchup against Vancouver Whitecaps FC brought the Queen City's debut MLS team a 2-1 victory and enough wins to count on one hand. Starting off the gameplay was a 2-minute goal from Vancouver striker Tosaint Ricketts, who rocketed the ball through the net before Charlotte's Andre Shinyashiki, a midfielder, evened the playing field six minutes later.

The tiebreaker came at the 85 mark when Daniel Rios tallied his second goal for the soccer team after notching one at the U.S. Open Cup earlier this month. Readers can see highlights from the match at the MLS website or attempt to secure tickets to future games via the team's schedule.