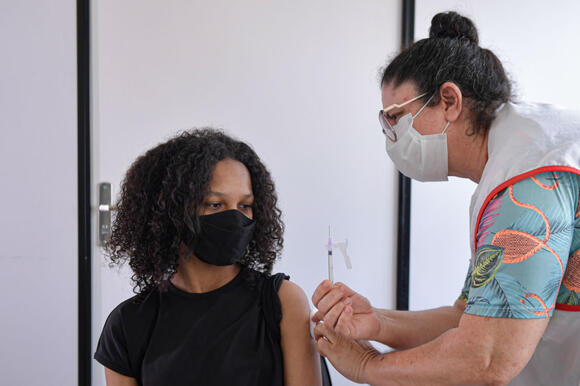 Currently there is no COVID-19 vaccine for children under 5. Atrium's clinical trial looks to add to a data pool to expand that group.(Pedro Vilela/Getty Images)

(CHARLOTTE, N.C.) Greeting Charlotte, and hopefully you're ready for some momentum on this Wednesday, May 11. Today's Roundup is all about moving up — or down, depending who you ask. Staying the same is this week's sunny skies, which carry a Weather.com-ordained high of 81 and low of 60.

Atrium Health is looking to slide down the age scale on COVID-19 vaccine eligibility by holding trials on the inoculation for children aged between six months and five years in Charlotte. The upward move comes courtesy of Queens University of Charlotte, which will transition to the highest level of collegiate play over the next four years. We also recount the story of 15 Charlotte-Mecklenburg Schools students who sustained injuries in a crash involving a bus and dump truck before detailing several recent drug crimes and resulting arrests.

What's happening: In the hopes of verifying if the coronavirus vaccination is safe for children between six months and five years old, Atrium Health Levine Children's Hospital in Charlotte will be the only regional medical center to conduct clinical tests on that age group.

Using doses one-tenth the strength of the standard Pfizer shot given to adults, some participants will receive working vaccines while others will get placebos. After two months, candidates will receive a third dose and medical professionals will collect data to determine how their immune response is impacted, Atrium stated upon announcing the trial on Monday.

Why it matters: Approval of the vaccine for the age groups on trial isn't expected until June, per NBC, but it would mark the first time since November that a new swatch of children would be given access to the vaccine. While Atrium's trial isn't the first clinical study focusing on children below the age of five, the data the hospital system garners could aid the Centers for Disease Control and Prevention and U.S. Food and Drug Administration in approving a new dose for younger kids.

The Queens University of Charlotte Royals are preparing to live closer to their namesake when the college's athletic franchises jump from the NCAA's Division II to Division I. Detailed on Tuesday, the divisional jump follows a unanimous vote from the trustees governing the college of 2,300 students. It will place the private university in the association's ASUN (formerly Atlantic Sun) Conference.

Calling the transition a "defining moment for Queens," university president Daniel Lugo said the move will allow the school to make upgrades to educational, athletic and arts facilities. The change will allow the college to expand its annual athletics budget from roughly $18 million to $22-23 million, according to Queen City News.

The announcement sets the Royals as one of the Atlanta-based ASUN conference's 14 members and the only to hail from the Tar Heel State in the 2022-23 season. While Queens will be able to seek ASUN conference titles and play participating teams this fall, The Charlotte Observer reports that a four-year interim period means it won't be eligible for championships until 2023.

At least 17 people, 15 of them Charlotte-Mecklenburg Schools students, required medical treatment after a district bus carrying 40 learners made contact with the nose of a dump truck near the intersection of Sharon Road West and Sharonbrook Drive on Thursday. The accident occurred before 7 a.m. while the bus held 40 students en route to South Mecklenburg High School on Thursday morning and also involved a passenger vehicle.

A rescue attempt saw firefighters spending 90 minutes dislodging the drivers of the truck and bus from their respective seats. The students went to a hospital for non-life-threatening wounds, while one of the drivers had life-threatening injuries and the other was hurt seriously. Mecklenburg's emergency services department advised residents to avoid the road around 7:40 a.m.

Speaking of busing at CMS, the district opened rider registration for students who need access to public transportation services on Monday. Readers with children to enroll can do so for grades pre-K through 12 via this page.

The Roundup reported nearly two weeks ago that President Joe Biden had vouched for the reduced sentence of a North Carolinian convicted of cocaine possession but state residents convicted of drug possession since then may not be so lucky. Here are three briefs describing recent cases of drug crimes and the arrests that came after:

More May 11 news to mull over in Charlotte: