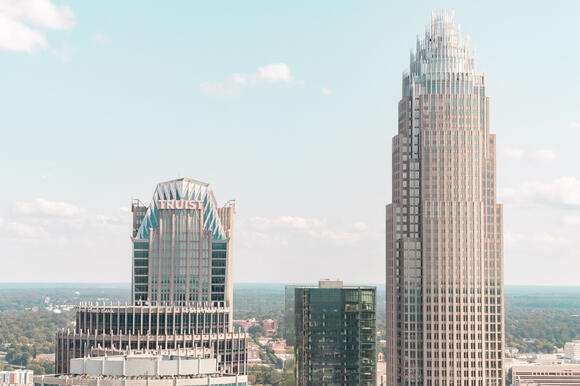 Turning away from politics, another Charlotte Area Transit System bus driver woke up with injuries this morning after an assault along one of her routes. And a new pie shop looks to combine the best aspects of pizza and dessert crusts when it opens in the Queen City on April 20.

When North Carolina's statewide primary election opens on May 17, voters will be able to preliminarily decide names to replace seven district representatives and four at-large members set to leave Charlotte City Council. With roughly a month to go before the primary and just over three before the general municipal election on July 26, here are a few of the candidates that will appear on city ballots.

At-large candidates: Of the 11 candidates vying for one of City Council's four open, at-large seats, two received the blessing of the Black Political Caucus of Charlotte Mecklenburg on Thursday: former Mayor Patrick Cannon and current councilmember Braxton Winston. The Cannon recommendation came despite the FBI taking the ex-mayor into custody in 2014 for accepting $50,000 in bribes.

Kyle Luebke, another politician seeking an at-large spot, is the first publicly gay candidate to announce a bid for the governing body.

For more on the election and who is seeking what in Charlotte and Mecklenburg County, check out Axios' voting guide.

For the second time in four months, former White House Chief of Staff and ex-North Carolina representative Mark Meadows faced a form of discipline at the hand of the government that used to pay his salary. The North Carolina State Board of Elections announced on Wednesday that Meadows' status as a registered voter had been expunged after he falsely claimed ownership of a property where he did not reside.

As we reported in March, Meadows cast an absentee ballot in Macon County, North Carolina in November of 2020, only to follow that up by voting in Virginia the following November. The discrepancy prompted NC Attorney General Josh Stein to ask the State Bureau of Investigation to look into the matter, revealing that the former head staffer had registered his address as a mobile home in Scaly Mountain that did not belong to him.

"There has been, not just accusations, but formal complaints made against Mark Meadows for registering to vote at a Scaly Mountain address that he never lived in, never rented and never owned," Chris Cooper, a professor at Western Carolina University, told ABC13 on Wednesday.

In just over two months, three Charlotte bus drivers have been victimized in cases of assault by riders, the most recent being a 60-year-old woman who received juries in what Charlotte-Mecklenburg Police Department officers are calling a case of simple assault. According to a CMPD report, one of the riders attacked the transport worker while behind the wheel near the corner of Ashley and Tuckaseegee roads around 3:30 p.m. on Tuesday.

Few details are available, but police said the driver went to a nearby hospital for her injuries. Previous CATS drivers to be injured in assaults include 41-year-old Ethan Rivera, who died in the wake of a Feb. 11 fatal shooting that officers later deemed to be an incident of road rage. Less than a week later, Queen City News reported that another driver faced a shot of saliva after a rider spit on them and damaged the vehicle they had been driving.

The violent incidents led to protests inside and outside of the Charlotte Mecklenburg Govenrment Center, where drivers and community members called on City Council to add cops to patrol bus routes and add barriers to protect drivers from gunshots.

Later in March, Tariq Bokhari, Council's District 6 representative, debuted concepts for $4,800 partitions that could be manufactured by local companies, while Queen City Nerve reported that a squad of federal transportation safety officers are assisting other enforcers.

4. Pie time: Charlotte's next bakery doubles down on dough with sweet, savory options

Most shops that peddle pies give diners a doughy binary, allowing them to choose between heavy pizzas or airy fruit and cream-based dessert options. While it doesn't count pizza as part of its menu, Hip Pies is preparing to roll out pies with fillings spanning bourbon and bacon to Cheerwine and crab cakes when it opens in the Charlotte Visitor Info Center on Wednesday, April 20.

If the lineup sounds eclectic, that's because it's intentional. Founded by Jill Marcus, owner of the Charlotte-based Mother Earth Group who first attained pie prominence when her chicken pot pies appeared on the Food Network in the mid-aughts, flavors at Hip Pies will switch daily. The shop will be located in the Uptown visitor's courtyard, so it will only open for takeout at 11:30 a.m. on days when weather permits. Readers are encouraged to check Hip Pies' Instagram page for daily hours, varieties and opening updates.