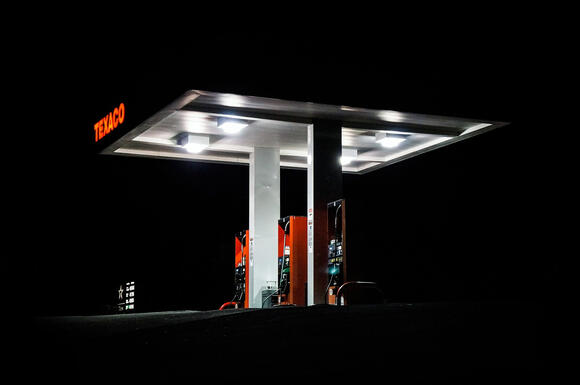 (CHARLOTTE, N.C.) Morning, Charlotte! It is Tuesday, April 12, and the magic number for today's Roundup is $3.85, the current average per-gallon price of gas in North Carolina. We'll tell you how that number has meandered over the past few weeks and about local law enforcement's efforts to name a suspect in a bank robbery that occurred in Charlotte on Tuesday.

Speaking of numbers, Charlotte City Council approved a $12 million measure on Monday that will increase the amount of affordable housing in the city while Mecklenburg County leaders prepare for a discussion on corporate landlords. Hoping to turn fashion into philanthropy, a local gallery space will pipeline proceeds from an upcoming event to Ukraine.

1. Painkiller at the pump: How NC's fuel prices have fallen and where to get gas-priced doughnuts

What's happening: Roughly four weeks after gas prices reached a statewide record-high average of $4.19 per gallon on March 11, fuel costs have tanked in North Carolina and residents can expect to pay around $3.85 for a standard unit of unleaded as of Tuesday. Prices are slightly less pleasant in Mecklenburg County, which has a per-gallon average of $3.89, but both are below the national average of $4.09, per AAA.

North Carolina's average has fallen by 34 cents over the past month and just under 11 since last week, but WCNC reports the prices still bring buying woes to some of the state's boaters and watercraft renters.

Wheeling out the deals: Evidently noticing the changing cost of combustibles, Charlotte-based Krispy Kreme announced a promotion that will decrease the price of a dozen original glazed doughnuts to match average national per-gallon prices, per FOX46.

The doughnuts, which still deal for well below diesel's respective statewide and national averages of $4.95 and $5.13 per gallon, will be available at all 31 of the chain's North Carolina stores for the gas-matched price starting Wednesday and continuing each Wednesday through May 4. The first week will see a dozen doughnuts for about $4.10, a nearly 50% decrease from the box's standard $7.99 price tag.

Nearly one week after someone stole an unidentified amount of money from the Bank OZK location at 4200 Park Road in Charlotte on April 5, the Charlotte-Mecklenburg Police Department are turning to the public to help name a suspect based on security footage. Readers who recognize the man in the above image can inform the CMPD Crime Stoppers by calling 704-334-1600 or 911.

The picture shows a bearded man with what appears to be a dark jacket, white t-shirt and dark beanie inside the lobby of the bank in south Charlotte, near the city's Ashbrook-Clawson Village neighborhood. Police reports indicate the man entered the bank around 9:40 a.m., requested money and then walked in the direction of Heather Lane, revealing that he had a limp.

In other crime news affecting southern Charlotte, police are still looking to charge someone with murder, real property damage and discharging a weapon into occupied property in the killing of 33-year-old Joseph Odarkoe Tetteh on Farthington Circle on Sunday, WSOC reported.

What happened: A series of seven affordable housing projects gained Charlotte City Council approval during a Monday meeting, paving the way for 602 units to be built through a $12.4 million commitment from the city. While contracts have yet to be awarded to specific developers, the following set of initiatives make use of $9.4 million left over in Charlotte's Housing Trust Fund and a pair of $50 million voter-approved bonds from 2018 and 2020:

Of the ratified developments, only the East Lane Townhomes units will be for sale. The rest will be rentable, and more information on each can be found here.

The bigger picture: As we reported in yesterday's roundup, Charlotte leaders have identified a need for 32,000 housing options that absorb less than 30% of their household income. While the builds approved at Monday's meeting account for less than 2% of what the Queen City needs, it at least allows the city is addressing inexpensive housing shortcomings.

"The ability for people to afford housing and be able to live in the city is of the utmost importance because cities are made up of people," Councilman Braxton Winston said at the governing group's meeting, according to WCNC.

Find out how the Mecklenburg Board of County Commissioners are also preparing to approach housing this week Below the Fold.

4. Fashion show philanthropy and earrings: How Charlotteans are sending support to Ukraine

It has been a bit since this publication last covered Russia's ongoing war with Ukraine, but the fighting continues nearly seven weeks after Russian military forces invaded their western neighbors on Feb. 24. Here are a few briefs highlighting how Charlotte residents are sending support to the invaded Eastern European nation:

Affordable housing addendum: Mecklenburg County leaders hope to sound off on another issue affecting home prices: corporate ownership. Per WSOC, the board of county commissioners will discuss the effects of corporate-owned rental properties in Charlotte when they meet for a budget and public policy meeting at 2:30 p.m. Tuesday. The county conducted research into the large-scale leases in January and commissioners are set to assess the potential and challenges that big companies improve on impoverished residents. The meeting will stream live via this page.