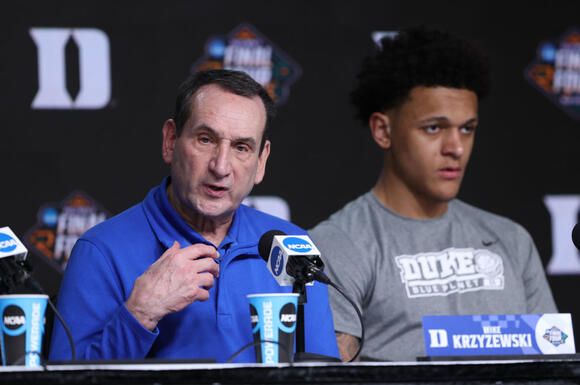 (CHARLOTTE, N.C.) Good morning, Charlotte! As last week enters the rearview and another appears on the horizon, today's Roundup recaps the University of North Carolina Tar Heels' 81-77 victory over the Duke Blue Devils in Saturday's March Madness game. Local homelessness advocates are hoping for their own win at Monday's Charlotte City Council meeting when the governing group discusses an outdoor camping ban.

In other news, former U.S. national women's soccer team goaltender Hope Solo faces charges of child endangerment and driving while under the influence stemming from a police stop in Winston-Salem last week, and little pink robots are Charlotte's latest delivery drivers. it is April 4, and here's what every resident of the Queen City needs to know until tomorrow.

But first, feedback: We want to hear from you to help improve the Roundup. Have a suggestion for changes or new daily features, or want to sound off on a recent story? Drop a line in the comments section.

What happened: The NCAA Division I Men's Basketball Tournament will be a toss-up between the University of North Carolina Tar Heels and the University of Kansas Jayhawks. The two teams are set to play for the March Madness marbles at 9:20 p.m. on Monday after the eighth-seeded UNC handed the Duke University Blue Devils an 81-77 uppercut in front of 70,602 fans on Saturday.

The recap: UNC and Duke, seeded two, volleyed the lead back and forth 18 times during Saturday's game as Tar Heels guard Caleb Love put 28 points through the kitchen sink. On the Blue Devils, forward Paolo Banchero and guard Trevor Keels did most of the work, scoring 20 and 19, respectively.

Per ESPN, a flurry of threes resounded with roughly two minutes remaining, putting Duke at 74-73 before the Heels hammered seven more points, including a three and a trio of free throws from Love.

Why it matters: Saturday's semifinal constitutes a disappointing end to Duke's impressive 32-7 season. The win would have brought the collegiate franchise and its revered coach, Mike Krzyzewski, their sixth March Madness title. Citing changes to the game and a desire to find a successor, Coach K revealed his retirement in June of 2021. He ended his 42-year career with the team with 1,202 wins, 101 March Madness victories and 13 trips to the Final Four, The Fayetteville Observer reported. Now, UNC chases its seventh national title.

What's happening: Monday evening's Charlotte City Council strategy session will likely include a lively discussion about the proposed reintroduction of a camping ban that would allow the city to fine people $500 for spending the night on city property. Local advocates have criticized the measure for its ability to punish the 3,000-plus individuals who are homeless in Mecklenburg County.

“I think we have to be really careful when we do something like this that we don’t jump the gun and not prepare, I think we have to go back and look at the problem of why they’re sleeping outside," said Bethany McDonald, the executive director of Mecklenburg County houseless help agency Hearts Beat as One, per WBTV.

Why it matters: Charlotte's previous outdoor sleeping ruling lost effect in December of last year after North Carolina Gov. Roy Cooper signed Senate Bill 300, a piece of criminal justice reform legislation that decriminalized a swath of local ordinances. Since then, Council has slowly been voting to bring back regional regulations related to animal abuse, fire code violations and weapon possessions.

Hope Solo may best be known for tending goal in over 200 games for the U.S. women's national soccer team, but she will be fielding something else after being arrested in Winston-Salem on March 31: charges of driving a vehicle while intoxicated, resisting arrest and child absue. In the back seat of the car were the two-time Olympic gold medalist's two-year-old twin daughters.

Caffeine-carting contraptions will serve as Charlotte's newest delivery drivers through a collaboration between the Queen City and Toronto-based robotics manufacturer Tiny Mile. Readers who visit Plaza Midwood over the coming months may see five of the little pink movers conveying caffeinated beverages from Undercurrent Coffee on Commonwealth Avenue.

Operating in a single-mile radius around the shop, which is about a mile south of the shopping center, Tiny Mile's webpage asserts that the bean bots can provide 15-minue deliveries at one-tenth the price of standard delivery services, charging an average of $1 per kilometer or $1.60 per mile. Undercurrent owner Todd Huber said in a city press release that he anticipates being able to "partner with Tiny Mile" and the company's "innovative delivery platform" while Tiny Mile head of growth Sharif Virani touted the service's "low impact and affordable neighborhood delivery."