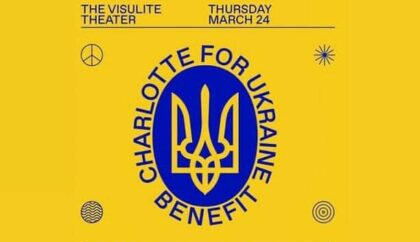 (CHARLOTTE, N.C.) Happy Thursday, Queen City residents! It is March 24, and don't expect to see much sun today as clouds blanket the sky and keep Charlotte at a nominal high of 69 before an overnight low of 44 and a windy weekend ahead. Today's Roundup focuses on moving forward, as Charlotte-Mecklenburg Schools is progressing on the development of two controversial school buildings via a $125 million contract after announcing a $1.7 billion operating budget.

A North Carolina company is looking to help female Black and Latina residents move forward from HIV diagnoses after the state ranked 11th in the United States for AIDS infections. Making headway after a restaurant fire, Charlotte's international airport is allowing passengers to return to the terminal. Our Music Month pick hopes to help the people of Ukraine move forward by spotlighting a benefit concert happening in Charlotte tonight.

Ardrey Kell arbitration: The Charlotte-Mecklenburg Schools Board of Education voted at their meeting on Wednesday to ink a nearly $125 million deal with Cincinnati-based Messer Construction Company to build two new schools in Ballantyne.

Last week, Woodfield Investment purchased the 71-acre Ballantyne site that will contain the new schools from the Catholic Diocese of Charlotte for $36 million, per WSOC. Woodfield will be responsible for constructing 769 residential units in a pair of apartment complexes.

Winston also spoke at the rendezvous about the school system's plans to address falling third-grade reading scores, per WCNC.

What happened: After a November report from the North Carolina Department of Health and Human Services revealed that the state had the 11th highest rate of new HIV infections in 2019, California pharmaceutical firm Gilead Sciences announced a $250,000 grant for a new NC AIDS Action Network program.

Infection rates are particularly high among the state's Black and Latina women, who are the focus of the NCAAN's Ella/Her Project. It seeks to spread the word about the disease through virtual and in-person outreach.

Why it matters: "Latina women in North Carolina now contract HIV at rates 3.6 times higher than the broader female population," said Judith Montenegro, director of programming for nonprofit Latinos in the South. Along with the Southern AIDS Coalition, that's one of the programs that will be collaborating with NCAAN on Ella/Her, per a press release announcing the gift.

Burger King might be known for its flame-grilled patties, but the restaurant may have been close to serving charbroiled airport on Wednesday after a kitchen fire broke out in the atrium at Charlotte Douglas International Airport around 2 p.m. Firefighters shepherded 1,000 passengers out of CLT terminals as they fought the whopper of a blaze, closing some sections of the airport until 4 p.m.

The transportation hub had 234 delays and canceled four flights the day of the fire, according to WBTV.

What to stream: Each artist has a single, album or EP worth exploring. Clark, whose 2021 debut "After the Violence" is the last release from the performers, often crosses paths with the likes of Adele and Alanis Morissette through her personal lyrics and refined voice. Squyres, meanwhile, also has a recent release in the form of last year's "Poet Priest."

Mark Mathis — the folk singer, not the "crazy weatherman" — has a performance of his subdued "Sparrow's Lullaby" on YouTube. McMillan's brand of laid-back strumming calls The Vaccines to Mind on "Has it Been You" while Alexandra has a decent library of covers, including Isaac Albeniz's "Asturia."

Where to see them perform: The show kicks off at the Visulite Theatre at 1615 Elizabeth Ave. in Charlotte at 7 p.m. tonight and readers can effectively donate to Ukrainian refugees by buying a $20 ticket at this page. Over 160 passes were available as of Thursday morning.

Ardrey Kell, continued: As we reported in January, the buildings — which will decrease student populations a the nearby Ardrey Kell and South Mecklenburg high schools — stirred up some controversy from area residents who are worried about traffic congestion. Charlotte City Council approved the district's rezoning request in February.