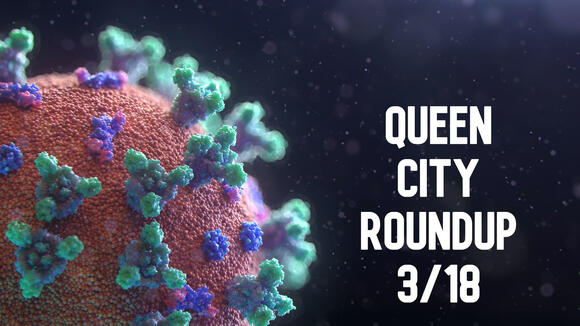 (CHARLOTTE, N.C.) Good Friday morning, North Carolinians! It is March 18, and welcoming you to the weekend is an investigation-focused Roundup as scientists in the Tar Heel State keep their eyes on a new subvariant of COVID-19 as Gov. Roy Cooper looks to the next stage of the coronavirus pandemic.

Also doing a bit of digging is North Carolina Attorney General Josh Stein, who ordered an investigation into former White House Chief of Staff Mark Meadows over possible voter fraud. A Charlotte court is ready to investigate Darian Dru Thavychith, the city resident accused of shooting and killing a local bus driver, following his return to the Queen City from a Kansas jail. Music Month investigates Grammy-winning South Carolina songwriter Peabo Bryson, who is performing in Charlotte on Saturday.

The weekend reading list also laces up its trench coats to peer into what happened last week and give readers insight into what the next one will bring.

What's happening: Concern is growing among health experts in North Carolina and throughout the United States as officials monitor the BA.2 subvariant of the omicron variant of COVID-19.

Seen in Europe, China and now the U.S, the Centers for Disease Control and Prevention announced on Tuesday that the variation, sometimes called 'stealth omicron,' accounted for 23.1% of new coronavirus cases detected between March 6 and 12, per Newsweek. That's a sharp jump from the 8% infection rate reported by North Carolina Health News on March 5.

Why it matters: Public health officials believe the latest widespread strain of COVID-19 can be transmitted 30% faster than the initial coronavirus variant. Mecklenburg County health officials saw their first two instances of BA.2 in January, but Dr. Anu Neelakanta, who studies infectious diseases for Atrium Health, said the variant hasn't led to a significant increase in hospital cases.

The numbers: The most recent data from the North Carolina Department of Health and Human Services showed 1,223 new cases of COVID-19, 769 active hospitalizations and a total of 23,030 deaths as of Thursday. That same day, Gov. Roy Cooper said at a press conference that "the worst of the pandemic is behind us" but will keep his State of Emergency order in place to allow hospitals to purchase and distribute tests and other materials.

What happened: After learning that previous White House Chief of Staff Mark Meadows may have registered to vote at an address he had never called home, North Carolina Attorney General Josh Stein called upon the State Bureau of Investigation on Thursday to scrutinize Meadows.

Why it matters: Meadows, who represented North Carolina's 11th Congressional District from 2013 to 2020 before former President Donald Trump selected him to head his administration's staffing, is accused of registering to vote in Scaly Mountain, a rural community in western North Carolina.

According to FOX8, however, Macon County District Attorney Ashley Welch said Meadows never lived in or visited the trailer, and his wife, Debbie Meadows, had only rented it for about a fortnight. CNBC reported that the couple voted in person in Virginia, where they own a condominium, in November of 2021 after registering to vote there in September. Prior to that, he cast an absentee ballot in North Carolina in November of 2020.

Darian Dru Thavychith, the 21-year-old Charlotte resident who faces charges of murder and shooting into an occupied vehicle, returned to the Queen City on Thursday to stand trial in the shooting death of Charlotte Area Transit System bus driver Ethan Rivera. Police in Shawnee, Kansas arrested Thavychith on Feb. 28 and have since held him in the Johnson County Jail in New Century, Kansas. He first appeared in court on Friday and future Roundups will have trial results.

Charlotte officers believe Thavychith to be at fault for the Feb. 11 shooting that killed Rivera as he was driving along North Trade Street. Police later attributed the incident to road rage and CATS drivers have used the resulting media attention to request safety measures like bulletproof barriers and increased police presence at bus stops.

4. Music Month: Awaken to the audio of award-winner Peabo Bryson

Who's up: Possibly the most celebrated Music Month mention so far, Greenville, South Carolina's Peabo Bryson is best known for cradling two Grammy Awards The first came in 1993 for the title track for "Beauty and the Beast" with Celine Dion, while Disney gave him another dub in 1994 via "A Whole New World" from "Aladdin." Those classics are always worth a listen, but the butter-smooth crooner takes his sweet, R&B-enraptured voice to a personal place on...

What to stream: "Stand for Love," Bryson's latest release from 2018, shows how the vocalist has variegated his volume during a quarter-century removed from the limelight. Listen to Bryson channel language in a style reminiscent of Gil Scott-Heron in the video for "Love Like Yours and Mine" below.

Where to see him perform: Charlotte residents can sample Bryson's ballads this weekend when he takes the Knight Stage at Blumenthal Performing Arts Center at 130 N. Tryon St. in Charlotte at on Saturday. Tickets to the 7:30 p.m. show with guest singer Rhonda Thomas start at $52.50 on this page.