(CHARLOTTE, N.C.) Top of the morning, Charlotte! St. Patrick's Day is just about four weeks away on March 17, but the Queen City won't have a parade for the third year in a row. We'll clue readers in to other ways to celebrate the Irish holiday in Charlotte.

In other news, police released a warrant identifying a 21-year-old Charlotte man as a suspect in the fatal shooting of Charlotte Area Transit System bus driver Ethan Rivera. Leaders at Charlotte-Mecklenburg Schools will take the district's mask mandate to a vote tonight, but surveys show most students and teachers want face coverings to stay.

It is Tuesday, Feb. 22, and here's what every resident of the Queen City needs to know until tomorrow.

What happened: The Charlotte-Mecklenburg Police Department issued a warrant for 21-year-old Charlotte resident Darion Dru Thavychith in connection with the shooting of a Charlotte Area Transit System bus driver. Thavychith is accused of opening fire from the driver's seat of an SUV on the bus 41-year-old Ethan Rivera was driving on Feb. 11. The suspect is not in custody as of Tuesday morning.

Why it matters: Rivera died due to the shooting, and the incident is just one of several instances of violence faced by bus drivers in the Queen City, The Charlotte Observer reported. During a vigil for the driver on Feb. 17, fellow CATS employees requested additional CMPD officers at bus stations and bullet-resistant partitions in the transport vehicles.

Learn about a pair of shootings that occurred in Charlotte over the past weekend Below the Fold.

2. Will CMS vote to end its mask mandate? Parents, students stand on both sides of debate

What's happening: The Charlotte Mecklenburg Schools Board of Education has a discussion on masks slated for its meeting at 6 p.m. Tuesday and could vote to end the districtwide face-covering requirement. Readers can watch the meeting here.

WCNC reported that some students and parents are in favor of a mask-optional ruling, while WCCB reports that advocacy organization Charlotte Mecklenburg Association of Editors found in a survey that 88% of its members feel the policy should remain. In a similar survey, 81% of members of CMS' Generation Nation said it's too early for the district to lift the mask mandate.

Why it matters: Regardless of what CMS does, Mecklenburg County's indoor mask mandate will end on Saturday following a vote from county commissioners on Feb. 17. 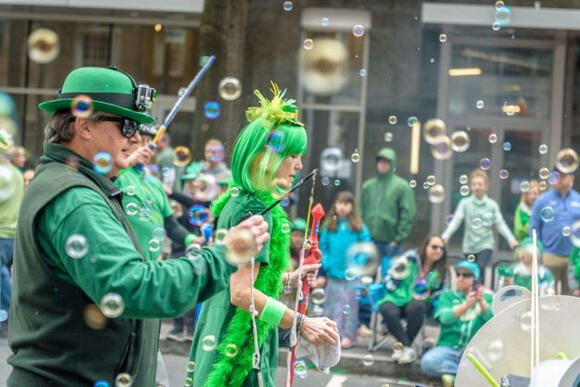 Charlotteans hoping to find a pot of gold at the end of two years of coronavirus-related St. Patrick's Day Parade celebrations may be disappointed to hear that future parades won't be happening. Event organizers Frank and Linda Hart, who have been said on Friday that they will be stepping back to focus on Frank's Parkinson's disease.

This year's parade would have been the 25th anniversary of the Harts first paving the Charlotte's roads green, with the couple initially setting up local processions for the Irish holiday on North Tryon Street in 1997. Without the Harts' involvement, future editions of the parade are unlikely to occur.

"It was just fun," said Linda Hart. "It brought happiness. It was the first festival coming out of the winter months."

Other options to go green in the greater Charlotte area: Despite the lack of a proper parade, several events around Metrolina will allow readers to get pinched and kissed on the March 17 holiday. Expect more events in the Roundup as the occasion approaches.

From 9 a.. to 5 p.m., the U.S. National Whitewater Center may have to consider altering its name to the Greenwater Center as the Charlotte facility dyes the nearby Catawba River a moss-colored hue. Music and a 5K run may help readers feel like St. Patrick during his 200-mile escape from Ireland.

For a town named Clover, having a robust St. Patrick's Day Parade is practically a requirement, and the South Carolina municipality is looking forward to getting its luck back after two years. Clover's last Irish parade was in 2019 and this year's will feature authentic Scottish music by Ghosts of Bannockburn.

Why wait until Halloween to get feet on the ground in a haunted maze? The 13th Acre in Monroe is looking to put visitors in the role of victims from the 1993 Jennifer Aniston horror flick "Leprechaun" by having them run from one of the Irish cryptids. Tickets start at $15 for the three-and-a-half-hour attraction.

In other news related to shootings in Charlotte, two incidents of gun violence took place in the city over the weekend. Police opened a homicide investigation after someone shot a 15-year-old boy around 10:40 p.m. on Friday near the corner of Mallard Park Drive and Mallard Creek Road, per WBTV. The boy died from his injuries at a nearby hospital on Saturday.