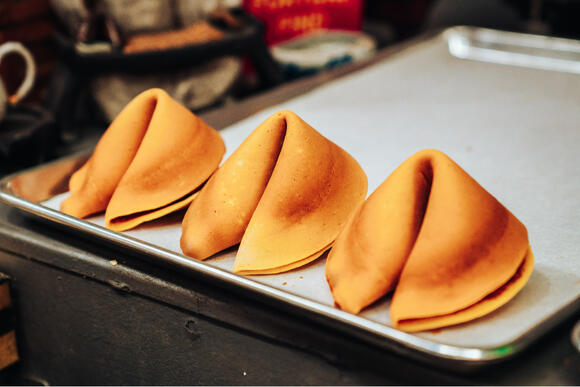 After taxes, Charlotte resident Gabriel Ferrero took home a Mega jackpot of $2.8 million. Where'd he get the numbers? From a fortune cookie(Meritt Thomas/Unsplash)

(CHARLOTTE, N.C.) Happy hump day, QCR readers! Are you feeling lucky? One Charlotte man had serendipity smile upon him last week when he won $4 million from Mega Millions using numbers he pulled from a fortune cookie from Charlotte's Red Bowl Asian Bistro, per NPR.

Also fortunate are Mecklenburg County residents, who will be able to take advantage of the county's new mobile library that is set to debut on Saturday. This week, Charlotte-Mecklenburg Schools also launched a new service, an app that allows students to report concerns anonymously, and the district finalized its budget.

On Tuesday, the president and CEO of one of Charlotte's largest community nonprofits announced his decision to step down, and we'll tell you what's next for Foundation for the Carolinas.

It is Wednesday, Jan. 26, and here's what every resident of the Queen City needs to know until tomorrow.

The app: Charlotte-Mecklenburg Schools is hoping students make use of a new Say Something Anonymous Reporting System, an app that allows middle and high school students to anonymously report concerning behavior. The app, which launched in the district Tuesday, can be downloaded from the Apple App and Google Play stores. Students can also leave tips via a web browser by entering the name of their school or town.

Once tips are posted to SS-ARS, Sandy Hook Promise's National Crisis Center will review them and inform CMS administrators if they are actionable. The NCC can also deploy police and ambulances as needed.

Possible concerns include sexual assaults and gun violence, two issues that CMS has been dealing with since the 2021-22 school year started in August. District officials and police have confiscated 23 firearms from students since then and a Title IX task force served administrators a 30-page report to address reported sexual assaults at CMS last month.

The budget: After mulling over North Carolina's $25.9 billion budget for about two months, the CMS school board approved a $2.3 billion budget for 2021-22 at its meeting on Tuesday. WSOC reports full-time teachers will receive $126 per day (a $23 increase) and substitutes will see $98 a day (up $18), per WSOC.

The new fiscal document gives board members a 2.5% raise and represents a 5.6% increase over last year's budget, despite the fact that enrollment hasn't increased past roughly 140,000. It also lays out how the district will spend parts of its $472 million in COVID-19 relief money that expires in September of 2024. Find out the latest on coronavirus-related absences at CMS Below the Fold.

This is the first time in over 50 years that Charlotte's library has a bookmobile. The system's old pair of mobile libraries ended in 1965(Charlotte Mecklenburg Library/YouTube)

About 2,400 books, laptops, DVDs and other forms of unfoldable media will soon hit the streets after the Charlotte Mecklenburg Library holds an unveiling for "MoLi," the system's new bookmobile, on Saturday. The ceremony will take place between 10 a.m. and 12 p.m. at Eastway Regional Recreational Center in Charlotte's Eastway Park.

In addition to transporting materials, the mobile library will allow residents to register for library cards, take online classes and use a Wi-Fi hot stop. Readers can request the MoLi to visit their neighborhood here. The book bus is the Queen City's first mobile library since 1965.

3. Michael Marsicano to step down after leading Foundation for the Carolinas for 24 years

Michael Marsicano, the president and CEO of Charlotte-based Foundation for the Carolinas, will be retiring from his position after helping grow the community forward nonprofit for over two decades. The 66-year-old announced his decision to step down in January 2023 on Tuesday, telling WFAE the following:

We’ve been able to move a lot of important items forward whether they be putting economic opportunity and upward mobility on the map with a plan that is a long-term plan that is embraced across the community, to our affordable housing work, to our initiation of the arts campus.

The nonprofit, which had an annual pool of $245 million to distribute when Marsicano joined in 1999, gave out $750 million in grants in Charlotte last year. The foundation now boasts over $4 billion in assets.

Under Marsicano, the foundation's contributions to Charlotte include the creation of an Arts and Culture Advisory Board to distribute funding, Read Charlotte to encourage youth literacy and the Carolina Thread Trail, which maps out the Charlotte area's network of hikeable pathways.

CMS, continued: Also on Tuesday, the Charlotte-Mecklenburg Schools Board of Education announced that coronavirus-related absences in teachers and bus drivers are decreasing. Per WSOC, leaders said they expected 342 teachers to be away from schools on Wednesday, down from roughly 1,000 during the first days back from winter break.

The district's COVID-19 dashboard showed 1,407 positive student cases among students for the week of Jan. 17-23, meaning about 10% of CMS' 140,000 students contracted the virus. A total of 367 staff members tested positive last week.