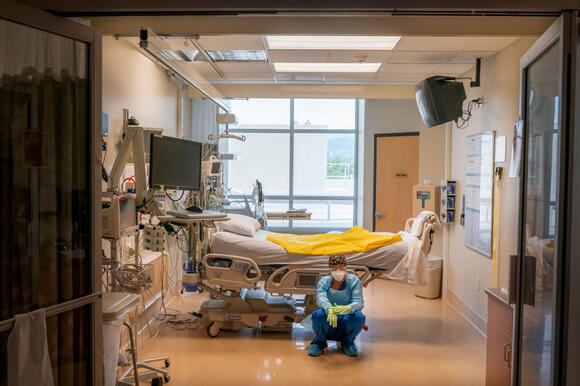 The ongoing surge of COVID-19 infections filled over 4,000 North Carolina hospital beds on Wednesday, the most seen during the pandemic(Nathan Howard/Getty Images)

(CHARLOTTE, N.C.) Good morning, Charlotteans. It is Thursday, Jan. 13, and here's what every resident of the Queen City needs to know until tomorrow.

A brief weather update: Forecasters are growing more confident that Sunday could bring snow to Charlotte. Meteorologists are still mum on how much of the white stuff will fall, but WBTV reports the Charlotte Department of Transportation set out this morning to spread salt across the city's almost 1,200 miles of road.

Charlotte police released bodycam footage of a mistaken arrest attempt in which officers handcuffed a Charlotte-Mecklenburg Schools teacher in June of 2021. Speaking of teachers, North Carolina needs them, and Gov. Roy Cooper said yesterday that state employees can begin serving as substitutes.

And the latest COVID-19 data for the Tar Heel State shows a record number of hospital inpatients as health care workers in Charlotte test positive for the virus.

What happened: The Charlotte-Mecklenburg Police Department released footage yesterday of officers incorrectly handcuffing a Charlotte-Mecklenburg Schools teacher in what officers say was a case of mistaken identity. On June 14, 2021, CMPD officers approached the teacher's house, believing she had been involved in a stabbing the previous day because the victim had given police her name.

Apparently the teacher in question — whose name was not released — shared a name with the suspect, and the label brought officers to the wrong home, where they found the teacher in her car, placed her in handcuffs and put her in the back of a patrol vehicle. After about 15 minutes of confusion in the squad car, the CMPD realized she was not the suspect and released her.

Why it matters: "The only thing that they said was ‘I’m sorry.’ And that wasn't enough for me,” the educator told WSOC. "I felt like I was stripped of my humanity at that point." She also said she was "ambushed" by police.

CMPD Chief Johnny Jennings, meanwhile, said the officers' actions were "justified," but the woman involved was still "traumatized." The department is conducting an internal investigation to determine if the officers committed any foul play.

What happened: The North Carolina Department of Health and Human Services' COVID-19 data from Wednesday shows 25,445 new cases, 4,098 active hospitalizations and 57 new deaths. The hospitalization figure is the highest the state has seen during the pandemic, prompting the North Carolina Healthcare Association to author an open letter to residents.

The correspondence encourages everyone who lives in North Carolina to get vaccinated against COVID-19 and get a follow-up booster dose if they are eligible. Readers can find local coronavirus testing sites using this tool from the NCDHHS and this list from Mecklenburg County. The state and county also have their own resources to find COVID-19 vaccines.

Why it matters: The hospitalization high comes as Novant Health and other local hospital systems near capacity and experience staff shortages due to COVID-19, per WCNC.

What happened: In response to staff shortages at North Carolina's school districts, Gov. Roy Cooper announced a new policy on Wednesday that allows state employees to assist at public schools.

The fresh guidance allows anyone employed by the North Carolina state government or one of its agencies to use community service days to fill in as substitute teachers, bus drivers or cafeteria workers. The policy took effect on Wednesday and will remain through Tuesday, Feb. 15.

Why it matters: Staff shortages have caused 20 schools to close throughout the state, shifting 11,000 students to remote learning, per WRAL.

Roughly 1,000 teachers at Charlotte-Mecklenburg Schools have called off each day since the district resumed classes after winter break on Jan. 4, and WFAE reports the district's stock of substitutes can only cover less than half of the absences.

“We may soon face some difficult decisions," CMS Superintendent Earnest Winston said, according to WBTV. "It is nearly inevitable that teaching and learning will be impacted more significantly should the virus remain on its current trajectory.” CMS' COVID-19 dashboard reported over 1,200 student infections and more than 600 cases among staff between Jan. 3 and 9.

Schools in North Carolina are only able to shift to remote learning on a day-by-day basis due to Senate Bill 654, which Cooper signed in August of 2021. According to WSOC, the law stipulates that virtual learning should be used following “COVID-19 exposures that result in insufficient school personnel or required student quarantines.”

In other news relating to CMS, the district appointed three new principals to school buildings on Tuesday. Dawsey "Darryl" Conner Jr. will bring his experience as assistant principal at Mallard Creek High School to Alexander Graham middle school. Tanya Branham, who has served as principal at Mountain Island Lake Academy since 2016, will be helming Phillip O. Berry Academy of Technology.

And Frederic "Rick" Mohrien will be the principal of the district's new southeast elementary relief school after departing Wingel Park Elementary, where he's been principal since 2017. CMS plans to open the new building in the fall using money from a 2017 bond to relieve teacher workloads at Bain, Lebanon Road, Piney Grove, Crown Point elementaries.