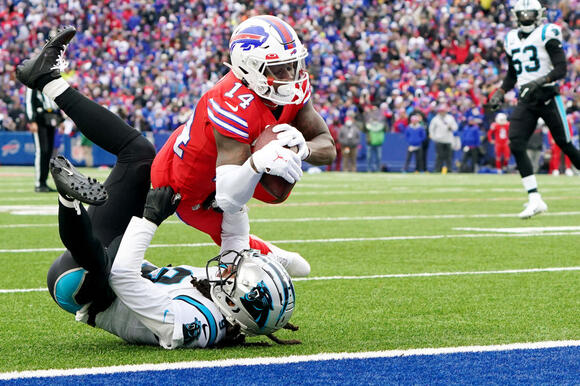 (CHARLOTTE, N.C.) Top of the morning, Charlotteans! It is Monday, Dec. 20, and that means there are only five days until Christmas. If you're still looking for a gift, our Charlotte Gift Guide has covered Queen City sports memorabilia, local gifts for beer lovers, inventions from Charlotte and nearby thrift stores to find decent deals on presents. Today's guide highlights spots for last-minute gifts.

And today's roundup takes a look at COVID-19 in North Carolina, telling you what experts say about keeping others safe during the holidays as more cases of omicron pop up in the Old North State. The Carolina Panthers lost to the Buffalo Bills, 31-14, yesterday while playing without a starting kicker following Zane Gonzalez's last-minute injury. We'll tell you how Gonzalez's absence impacted the game and how the Hornets stacked up against the Phoenix Suns on Sunday.

Oh, and if you've been following our coverage of the ongoing difficulties at Charlotte-Mecklenburg Schools, The Charlotte Observer is hosting a brief survey asking parents, students and employees to share their thoughts about safety at Charlotte's largest school district.

Here's what every resident of the Queen City needs to know for today.

1. 'The greatest surge in COVID-19 infections to date': How to prevent COVID-19 during the holidays

What happened: In a Friday press release, the North Carolina Department of Health and Human Services urged all Tar Heels to get vaccinated and boosted, adding that the omicron variant is "expected to cause the greatest surge in COVID-19 infections to date in the coming months."

WCNC reports many Walgreen and CVS locations have in-store and at-home testing, and StarMed Healthcare is offering testing at its Tuckaseegee Road clinic. And the Observer has a list of spots distributing boosters and vaccines.

Why it matters: Christmas is approaching on Saturday, Kwanzaa starts on Sunday and New Year's Eve is next week, so NCDHHS' warning comes ahead of holidays that bring people in close proximity with one another.

It also came the same day that state health officials in Pitt County, nearly four miles northeast of Charlotte, announced three new cases of the omicron variant of COVID-19 in their region, per Spectrum. The NCDHHS press release stated that omicron is "two to three times as contagious" as the delta variant.

See the Below the Fold section for more on North Carolina's latest coronavirus numbers.

What happened: The Buffalo Bills beat the Panthers 31-14 on Sunday after the team held an unexpected pregame tryout in New York for kickers due to Zane Gonzalez's right quadriceps injury. Gonzalez injured himself during a warmup drill and Carolina felt it, not making a single voluntary field goal as they tried to play catch up with the Bills.

Why it matters: ESPN reports Gonzalez has hit 17 field goals in a row since October, when he missed the team's Week 14 match against the Dallas Cowboys in Texas.

Staring down a 5-9 win-loss barrel with three games of regular season play remaining, the Panthers have a 0.1% chance of reaching the playoffs this year, per FiveThirtyEight. At least the team didn't have to push any weekend games back due to COVID-19, and fans may be able to catch three weeks of entertaining football if the Cardiac Cats kick it into gear.

What happened: The Hornets had their stingers at the ready for Sunday's game against the Phoenix Suns, but Charlotte ended up losing 137-106 in Arizona. The Hornets played without Cody Martin after ESPN reporter Tim Bontemps took to Twitter to report that the forward had entered NBA's health and safety protocols.

Click to editjhy it matters: Since we've last checked in with the Hornets, the team has had a case of homesickness, having won one road game 131-115 against the San Antonio Spurs on Dec. 15 but losing 125-116 to the Portland Trail Blazers on Dec. 17. They have the chance to recoup their 16-16 win-loss record, but they won't be back in Charlotte until they play the Houston Rockets on Dec. 27. Before that, they'll have to face the 20-9 Utah Jazz and the 15-14 Denver Nuggets ja in their respective hometowns.

As the remaining gift-giving holidays approach this week, it's time to put the Charlotte Gift Guide to bed, but stay tuned for next week's updates to learn how you can ring in the new year and celebrate other winter events in Charlotte.

Before getting to today's guide, a question: Wheere do you go if it's only five days until Christmas and you still have gifts to buy? It's a perplexing one, but today's guide helps answer the profound query for shoppers in Charlotte.

The numbers: The News & Observer reports that North Carolina's most recent COVID-19 data shows that 3,980 new cases were reported on Friday, along with 22 new deaths and 1,584 hospitalizations related to the virus.

In terms of vaccinations, about 73% of the state's adults are partially vaccinated and 69% have been fully vaccinated. Taking a step back, roughly 58% of the state's population has full vaccination status while 62% of residents have gotten at least one shot. Nearly 3,000 of those doses and over 6,000 boosters came from a mobile clinic that wrapped up operations in the western half of North Carolina last week.