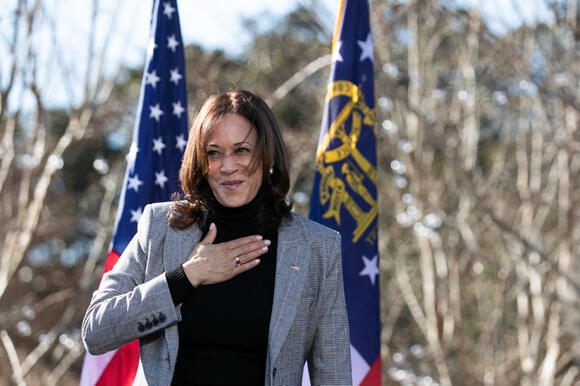 (CHARLOTTE, N.C.) Hey there, QCR readers, and welcome to the last Roundup of the month! Today we'll let you know when U.S. Vice President Kamala Harris will be coming to the Queen City and what she'll be talking about after announcing her visit on Monday.

We also detail a lawsuit that 39 former students of the University of North Carolina School of the Arts students filed, alleging staff members at the college either engaged in sexual abuse or helped cover it up. And the owners of a popular vegan food truck that makes its way around Charlotte are preparing to open a permanent storefront, and we know exactly where it is.

It's Tuesday, Nov. 30, and here's what every resident of the Queen City needs to know.

Today is also Giving Tuesday, and the Charlotte Observer has a list of 23 local organizations working to create affordable housing for Mecklenburg County's population of 3,100-plus homeless individuals. WCNC has a few tips for donating to charities and what records part-time philanthropists should keep.

What's happening: Tomorrow is the start of December, and while Santa won't be coming to town until the end of the month, Vice President Kamala Harris and U.S. Secretary of Transportation Pete Buttigieg will be. Instead of a bag of presents, the two will come prepared with information on the Biden administration's $1.2 trillion infrastructure plan. U.S. Rep Alma Adams, a Democrat representing North Carolina's 12th District, will join them.

Why it matters: Biden's $1.2 trillion Bipartisan Infrastructure Deal will inject $911 million into the state's budget to repair roads and bridges and improve residents' access to broadband, electricity and clean water. We've already detailed how the plan will impact North Carolina in a previous QCR, but Harris is expected to provide more information.

The White House says Harris and Buttigieg will speak on "how the Bipartisan Infrastructure Law will upgrade our nation’s infrastructure and create good-paying union jobs in North Carolina." The two will also likely discuss the Biden administration's Build Back Better Act, a nearly $2 trillion bill that seeks to combat climate change and provide affordable health care, tax cuts and investments in childcare. Harris extolled the virtues of the bill during a Nov. 19 trip to Columbus, Ohio.

What happened: Thirty-nine alumni of the University Of North Carolina School of the Arts filed a lawsuit alleging 25 current or former staff members either sexually abused them or helped to keep the information hidden. First appearing Monday in the Forsyth County Superior Court, the suit references incidents that occurred between 1969 and 2021.

Why it matters: This isn't the first time UNCSA has faced legal action for harboring staff accused of sexual assault. Seven former students filed a lawsuit with the same court system in September, stating staff at the Winston-Salem college abused them between the 1970s and 1990s. Attorney Lisa Lanier, who is representing the alumni in the suit filed Monday, said the September lawsuit helped embolden the most recent crop of former students to come forward with their stories.

Stephen Shipps, one of the defendants in the latest suit and a former violin professor at UNCSA, plead guilty on Nov. 16 to a federal charge of having sex with a 16-year-old girl after moving her across state lines in 2002.

3. Charlotte vegan taco truck puts it in park with opening of new storefront

What's happening: Romeo's Vegan Burgers is getting the brick-and-mortar treatment after the food truck's owners announced they would be opening a physical storefront with a drive-thru at 5518 South Blvd. in Charlotte. The location is expected to open sometime in December and will serve the same plant-based burgers that the truck has been cooking up since it opened in November 2020.

Why it matters: Per Axios, Romeo's said the new restaurant will be the first Black-owned, all-vegan drive-thru to open its doors in the Southeastern U.S. "We're definitely trying to be that vegan Chick-Fil-A," co-owner Tigo Faulkner told the news outlet.

In other news relating to vegan food in North Carolina, Spectrum News reports a man in Chapel Hill opened what he says is the state's first solely vegan ice cream shop. Theodore Chatfield, owner of Vegan Ice Cream Man, has an arsenal of 21 dairy-free flavors at his new store at 102 S. Merritt Mill Road.