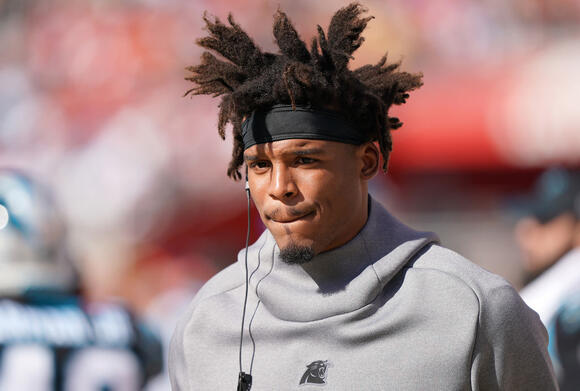 (CHARLOTTE, N.C.) Happy Thursday, Charlotte! If you hear the pitter-patter of tiny feet outside your window today, that's not the stork, it's merely rain, and the Queen City is set to see a lot of it today, with Weather.com showing a 40% chance of rain during the day increasing to 92% in the evening. But at least we have warmer temperatures! The high today is 71 and the low is 58, and warmer weather is expected to carry over into tomorrow and the weekend as the chance of rain gets slashed.

Today's roundup has headlines about former Panthers' quarterback Cam Newton, who is reportedly meeting with head coach Matt Rhule today and may be making a rumored comeback to the Cardiac Cats. Queen City residents are reacting to the arrival of the first refugees from Afghanistan this week and North Carolina's attorney general said he's reached a settlement with a Charlotte gas station that was allegedly charging customers $10 for a gallon of gas.

It is Thursday, Nov. 11, and look at that, the month and date are the same. Here's what you need to know.

What happened: Sources close to the Carolina Panthers say head coach Matt Rhule, team owner David Tepper and external affairs vice president Steven Drummond are set to have a sitdown with Cam Newton, the team's former quarterback today. Newton is a free agent after the New England Patriots released the 32-year-old from quarterback duties in August in favor of rookie Mac Jones.

Why it matters: During Newton's 2011-19 tenure with the Panthers, he became the team's leader in passing yards, passing touchdowns, pass attempts, pass completions and quarterback wins, among others. He could be the antidote to the team's 4-5 slump this season.

The reported meeting comes after Panthers quarterback Sam Darnold sustained a shoulder injury during the team's 24-6 loss against the Patriots on Nov. 7 and is likely to miss at least four games on injured reserve. Darnold had missed the previous six games due to a Week 3 hamstring injury. P.J. Walker, who filled in for Darnold during that absence, will start on Sunday against the Arizona Cardinals.

What happened: Refugees from Afghanistan are continuing to arrive in Charlotte. The latest is a former Afghan interpreter and his family, but the new arrivals are worried about what fate may await them here. "I'm worried about being homeless," the interpreter, Hamid, told Spectrum News.

Why it matters: Hamid's comment references the difficulty that Charlotte-based nonprofit Interpreting Freedom Foundation has had in trying to rehome the refugees. Employees have vetted more than 70 Queen City properties while looking for places to house the Afghans, but so far none of the landlords who own those properties have agreed to let them stay. It's a last bump in the road for many of the evacuees, who fled Afghanistan in response to violence and poor conditions. The current surge of refugees follows U.S. President Joe Biden's decision to withdraw American troops from the War in Afghanistan in August.

What happened: North Carolina Attorney General Josh Stein has settled with the Queens Market gas station on West Sugar Creek Road in Charlotte for $20,000. The AG previously accused the gas station of charging $9.99 for a gallon of gas earlier this year, violating state's laws meant to protect consumers from price gouging.

Why it matters: The price gouging accusations came amid a gas shortage in the Tar Heel State, brought on by a hacker group's shutdown of the Colonial Pipeline in May. In August, Stein issued his lawsuit against Queen's Market, arguing the station had hiked midgrade gas prices by 278 percent. Around the time of the shutdown, WSOC reported 71% of North Carolina gas stations were without fuel and a viral TikTok tipped the public off to the high gas prices.