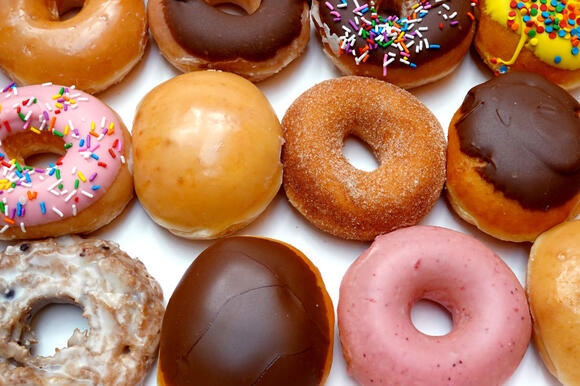 (CHARLOTTE, N.C.) Good morning Charlotte, do you hear that sound? Look outside your window; it's not raining, that's just the sound of donuts rolling down the street as November's National Donut Day moseys into town. Today's roundup will inform Charlotteans of where they can take advantage of the holiday for special deals on the round doughy treats.

We also bring the news of a new, three-skyscraper development set to begin construction on the border of two of the Queen City's largest districts and the Charlotte-Mecklenburg police are investigating reports of a sexual assault at a local high school. And the weekend forecast is set to see temperatures increase after a chilly few days.

The date is Friday, November 5, and here's what you need to know before you start your weekend.

What's happening: In 2022, Chicago-based Riverside Investment & Development will break ground on a trio of mixed-use high-rises costing $750 million. The new project is yet to have a name but will cover the block surrounded by South Tryon Street, East Carson Boulevard, East Morehead Street and Morehead Square Drive.

Why it matters: Thursday's project announcement follows Riverside meeting with officials from the Charlotte and North Carolina transportation departments to conduct a traffic study, which may result in the streets mentioned above being widened. The new towers are expected to bring further development and funds to Charlotte's Uptown and South End districts, two highly populated areas that could benefit from having more places for residents to live and work. The new development will require the Midnight Diner at 115 E. Carson Blvd. to relocate to a nearby plot.

"We are very excited and honored to join the Charlotte business community and help transform the area between Uptown and South End, creating a world-class live-work-play environment that will contribute to the city’s already impressive growth story,” stated Riverside's chief operating officer, Anthony Scacco.

What happened: The Charlotte-Mecklenburg Police Department is looking into reports of a student who said they were sexually assaulted at Hawthorne Academy of Health Sciences in 2020 and then suspended from the school for reporting it. Police records indicate a 17-year-old student is facing charges in the case, and Charlotte-Mecklenburg Schools Superintendent Earnest Wilson is unable to reveal the names of students involved because they are minors.

Per WBTV, over 100 Hawthorne students left class on Wednesday to protest the incident and CMS's handling of similar cases in the past.

Why it matters: This isn't the only ongoing sexual assault case under investigation in CMS. The CMPD is also looking into West Charlotte High School after a 15-year-old student had to go to the hospital following a sexual assault at the school in October. Earlier that month, students at the district's Olympic High School staged a walkout to protest a student-athlete who was allowed to play football after being convicted for a sex offense. Back in July, parents and students from Myers Park High School convened to speak out against the school's handling of another sex crime.

In other CMS news, police placed the district's Marie G. Davis Middle School on lockdown yesterday due to a nearby shooting.

3. Rolling in the deals: Where to stop for National Donut Day in Charlotte today

What's happening: Today is an unofficial National Donut Day and there's never been a better time to sample dough rings from Charlotte’s specialty bakeries like Burney’s Sweets & More in Belmont or MJ Donuts in the Pineville neighborhood. Some of the shops are also offering deals. Customers can grab four gourmet brioche doughnut holes at Coco and the Director in Uptown for $6 between 11 a.m. and 5 p.m. or stop at Suarez Bakery in Optimist Hall for a free glazed donut (as long as supplies last, so hurry!).

Why it matters: Free donuts, duh. Celebrated either Nov. 5 or 10, today's festivities are part of the second National Donut Day of the year, which is often considered the unofficial, commercialized version of the holiday. The National Donut Day held on June 3 each year dates back to 1938 when the Salvation Army coined the date to honor women who served the deep-fried bread wheels to soldiers in World War I.

4. Weekend Weather forecast: Warmer than it's been

If the mid-40 temperatures have got you feeling blue in the Queen City, this weekend should help to liven your spirits. Weather.com anticipates temperatures are expected to settle around 57 degrees with some light cloud coverage today. Expect gray skies and a 24% chance of rain with temperatures staying in the same range on Saturday, with more rain expected that evening. The sun is expected to shine through a partly cloudy sky on Sunday, bringing it up to 64.