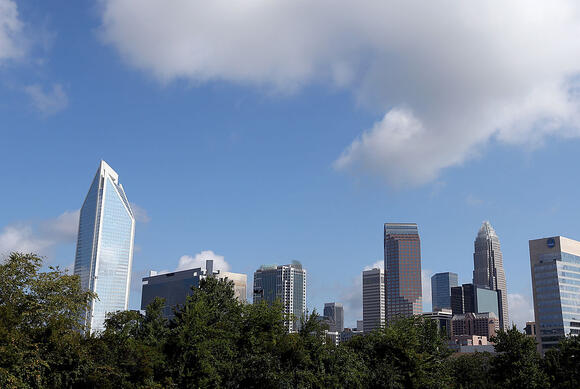 (CHARLOTEE, NC) Happy Wednesday, Charlotte! We're nearly halfway to the end of another October week, and deadlines are fast approaching for homeowners who want to save upwards of $300 to abate property taxes. This Queen City Roundup details those grants and how to apply for them before sharing the news that Charlotte-Mecklenburg Schools is contemplating dropping its mask mandate.

We also have stories about a new Italian restaurant set to replace a popular crepe spot in Charlotte's NoDa district and a new exhibit now open at Charlotte's Discovery Place Science museum that could make for a fun weekend activity. Today is Wednesday, October 13, and here's what you need to know.

Qualified Mecklenburg County homeowners are currently able to apply for a property tax assistance grant that awards up to $340, but the deadline to submit an application is only about two weeks away, on Halloween. The Helping Out Mecklenburg homeowners with Economic Support grant provides up to 25% of their last tax bill, so long as residents have lived in their homes for at least three years, have one or zero delinquent tax bills and earn no more than 80% of their area's median income.

Homes do not have to be paid off to qualify and there is no age requirement for homeowners. The grant was introduced in July to help Mecklenburg homeowners cope with the financial symptoms of COVID-19.

"Created by Mecklenburg County, the HOMES program seeks to make a difference for local homeowners by balancing general cost-of-living increases with support for homeownership, the most significant financial investment for many County residents," Mecklenburg officials explained in a news release.

2. CMS reveals metrics for when students, staff can drop masks

Charlotte-Mecklenburg Schools may eventually follow in the footsteps of other national and local public districts and universities that have decided to nix their mask mandates in response to decreasing case numbers. Charlotte's largest school district currently requires age-eligible students and staff to wear masks, but school officials offered a window of what conditions need to be met in response to a comment from a parent at a board meeting this week.

"We would like to be below, as a county 5% for the next 30 days, and that is one of the metrics that we are looking at," CMS Superintendent Earnest Wilson told a parent who said the district "[has] no metrics to support a mask mandate." asked the district's board at a meeting on Tuesday.

Mecklenburg County currently sits at a positivity rate of 8%, meaning CMS parents may have to wait a while before their kids can go to schools mask-free.

In other news from CMS's board meeting, the district voted to approve the second pay increase for bus drivers this year. WCNC reports that driving students to and from school is now worth $17.75 hourly instead of $15.75 per hour.

A Charlotte eatery concept known for its spherical Italian deserts will soon be replaced by a restaurant serving a broader swatch of Italian fare and wine under the same ownership. Queen City restauranteurs Jamie Brown and Jeff Tonidandel announced the closure of their Crepe Cellar Kitchen & Pub at 3116 N. Davidson Street via Instagram on Tuesday, but offered some consolation: a new spot.

While exact timing on the transition remains unknown, the new restaurant will be called Ever Andalo and feature a few items from Crepe Cellar like burrata and homemade pasta.

Yet to visit Crepe Cellar or saddened to hear it will be gone soon? Good news, because the dessert-tinged restaurant is set to stick around until Ever Andalo opens, and the Charlotte Observer has a guide to what to get at the NoDa restaurant before it sunsets.

4. Weekend museum visit: Apollo: When We Went to the Moon at Discovery Place Science

Charlotte has so many museums, but most people tend to think of the Mint when they want to visit an educational display close to home. But Charlotte's premier science museum also has a lot to offer, including a new, lunar-themed exhibit detailing NASA's Apollo missions to reach the moon.

It's one small step into the museum for the touring exhibition, but a big step into the building's atrium, where guests can see 360-degree video from the cockpit of Apollo 11 as the rocket was taking off or walk around a 1:1 model replica of the Sputnik 1 satellite. Tickets range between $19 and $23 for adults, children and seniors to enter the museum and see the exhibit, which opened Oct. 2 and will remain in Charlotte until Jan. 2.

(Streeter Lecka/Getty Images) (CHARLOTTE, NC) Happy end of the week Charlotte, hope everyone is ready for higher temperatures and brighter days over the weekend! Today is Friday, September 24, and here's what you need to know.