I am an educator and filmmaker. My documentary films on historic African American schools have screened at film festivals, colleges, libraries, and other venues. In Fall, 2017 I completed SHARECROP and SHARECROP: DELTA COTTON, documentaries that showcase oral history of the South’s “forgotten farmers.” These films have screened at festivals in major cities including London, Atlanta, Detroit. 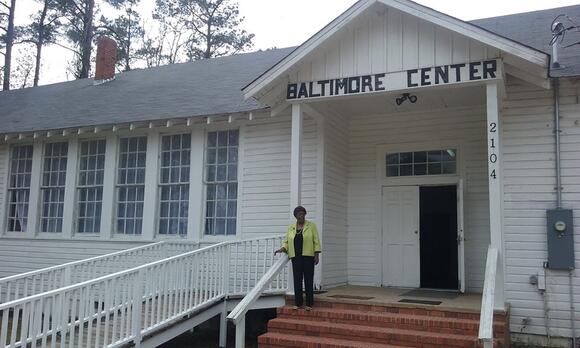 The Baltimore School in Bladen County, NC was built on a Rosenwald plan in the 1940s. Jean Lloyd (pictured in the yellow jacket on the steps of the building, which is now a community center) is a dedicated alumni association member. Lloyd recalls that when she attended school there decades ago, she had caring teachers. The teacher she remembers the best is her third grade teacher, Ms. Evelena Bryant, who is now 97 years young.

Bryant recalls that when she taught, she encouraged students to create stories. She wanted them to have fun while learning, but her expectations were always high. Lloyd and Bryant both recall that May Day was a big event at the school every year. The students learned to move in a pattern while each holding a colorful ribbon, which resulted in the May pole being wrapped with the ribbons.

Although the early history of the Baltimore School is not entirely clear, Ms. Lloyd’s research has revealed that the African American community donated land for the school, raised money, and that the school was apparently built on a Rosenwald school plan. As Hoffschwelle notes in The Rosenwald Schools of the American South, the plans were made available to counties free of charge by the Rosenwald Fund, and were used even after the Rosenwald School building program ceased operation in 1932.

This school is another example in the Cape Fear region of the profound effects of the school building program created by Booker T. Washington and Julius Rosenwald. It's also a testament to the sacrifice that African American families made for education.

Southern African American families during the segregation era paid their taxes, then had to raise funds again to obtain schools for their children (See Anderson, The Education of Blacks in the South, 1860-1935). In addition, African American schools received the old books discarded from schools for European Americans, and parents frequently raised money for basic supplies and boarded teachers in their homes.

The Baltimore school operated in the traditions of many NC African American schools of that era. They used music, drama, recitation, and instilled an ethic of service in their students. The quote "enter to learn, depart to serve," which is attributed to pioneering educator Mary McLeod Bethune, epitomizes the mission of the Baltimore school and so many others like it.

I am an educator and filmmaker. My documentary films on historic African American schools have screened at film festivals, colleges, libraries, and other venues. In Fall, 2017 I completed SHARECROP and SHARECROP: DELTA COTTON, documentaries that showcase oral history of the South’s “forgotten farmers.” These films have screened at festivals in major cities including London, Atlanta, Detroit.

Dr. Johnny Batts at the Sloop Point Rosenwald SchoolClaudia Stack. Dr. Johnny Batts, Jr. is a retired physicist who was born in 1942 in Pender County’s historic Edgecomb community (click here for more information about Edgecomb from the Pender County African American Heritage Trail). Dr. Batts attended first through sixth grade at the Sloop Point Rosenwald School. He doesn’t know exactly when his teacher Lillie Mae Billingslea started teaching at Sloop Point, however, he knows that she taught his uncle who is more than two decades older than he is. Dr. Batts calls Ms. Billingslea a “multi talented” teacher, and credits her with his interest in science and his love of music.

George E. Davis & Familyphotograph from History of the American Negro and his Institutions by Arthur Caldwell, published 191. A shorter version of this article by Claudia Stack and Dr. Richard T. Newkirk first appeared in the 2/27/19 edition of Port City Daily.

1) If it’s worth going up to the door, it’s worth going through. Cats are wholly committed to whatever they do. Once they have a goal, they pursue it fully until they attain it (or until someone locks them in a bathroom to calm down). Cats don’t let apprehension get in their way. They operate on a the principle of “if I want the lizard, I go for the lizard 100%.”

Great Smoky Mountain Railroad locomotive/picture by Claudia Stack. Although my family has visited western North Carolina many times before, we usually stay in Blowing Rock near Boone, NC. We wanted to do something a little different for my husband’s birthday weekend. I decided to book a train ride on the Great Smoky Mountains Railroad, which runs out of Bryson City, NC.

Buying a horse from Bowie Auction Horses in Bowie, TX

My friend Linda, who is an excellent horse trainer, told me not to do it. My husband threatened to install parental controls on my phone. My son Jack, who helps take care of our animals, shook his head. Why had I pressed the “Buy Now” button on a painfully thin horse in a Texas feedlot? Why indeed? I do have a rationale, or at least a rationalization…

The collected stories of the “Black Homer of Jimtown" by Ed Mott / image by Claudia Stack. Author Edward Harold Mott (1845-1920) was born in Pennsylvania. In 1878, he became a newspaper correspondant for several NY newspapers. As his career unfolded he also wrote books on PA history, as well as biographies and short stores. Although he lived for much of his adult life in Goshen, NY, Mott spent time in Southern Pines, NC.

Spurgeon Neal Ellington/American Air Museum in Britain. A decorated Tuskegee airman was a young teacher at Pender County Training School in Rocky Point, NC before he began his military training. Spurgeon Neal Ellington was born in 1919 in Winston-Salem, NC . He graduated from Winston-Salem Teachers College in 1939. In 1941, at the age of 21, he stated on his draft card that his employer was J.T. Daniel of Rocky Point. Daniel was the longtime principal of Pender County Training School. J.T. Daniel and his wife Leona were education leaders who fostered success for several generations of African American students in Pender County, NC (see The Daniels: Leaders in Excellence at an NC Rosenwald School).

How ordinary families can win the college game

This article is for ordinary families who want their children to be able to attend college without massive student loan debt. These suggestions are by no means comprehensive, but they are based on seventeen years of college advising experience as well as my personal experience as a student and as a parent.

Parenting children on the autism spectrum can be very challenging. The various ways that Autism Spectrum Disorder (ASD) presents means that different intervention strategies can work for different children. This article examines the Treatment and Education of Autistic and related Communication- Handicapped Children (TEACCH) model.

Rosenwald schools: An example of African American commitment to education

The real horse whisperer has a lot to offer all riders

“There’s only one real horse whisperer… and that’s Robert Redford!” Joked Buck Brannaman during a clinic in North Carolina. As the inspiration for Nicholas Evan’s bestselling novel The Horse Whisperer , and as the double during the training scenes in the movie by the same name, Brannaman is in a unique position to comment. Far from trying to build a mystique, however, Brannaman openly shares his training methods and his enthusiasm for the California Vaquero tradition in which he is rooted. This Western system of training was influenced by Spanish classical riding, and spread from Mexico into California in the 1700’s. It is a system that plays on the horse’s herd skills in order to gain his cooperation and understanding.

Working for harmony: A profile of trainer Linda Hoover

Linda Hoover working with a colt, picture courtesy of Linda Hoover/ Cornerstones LLC. “However you show up in life, you show up with horses. How do you teach someone who is passive to become a leader to her horse?” Linda Hoover poses this rhetorical question while reflecting on horsemanship and life. It reflects her passionate interest in helping her students to develop an awareness of what is important to horses. She observes that we take lessons that teach us to keep our heels down, but “when do we learn how to observe our horses?”

Cancer during the COVID era

I fall firmly into the category of, “that won’t happen to me… and if it does, it won’t be serious… and if it’s serious, I’ll get over it… and if I don’t get over it, I have good life insurance, so it’s still a win for my family.” But no amount of glib dark humor could stop this train from rolling. It all still feels surreal. I went from routine mammogram in July, to breast cancer diagnosis in August, to chemo all fall, to surgery in January, and then radiation...

General stores in the South were mercantiles, lenders, post offices and gathering places

Matthis Sharpless and George Buckner Daniel Parker, III at the GDB Parker Store in Chinquapin, NC. Mr. Sharpless sharecropped for the Parker family, then left the area to serve in the military and work for General Motors. Mr. Parker’s grandfather, GBD Parker, Sr., established the store c. 1890 and had a reputation for being blunt, but fair. Picture by Claudia Stack.

Some time ago, I stumbled upon some effective life hacks for dealing with the paralysis that anxiety can create. At times, especially when my sons were younger, I felt overwhelmed by all the things I needed to do at work and at home. It wasn’t that I didn’t want to do these things, it’s just that there was so much to do. I recall sitting in my classroom after school, after a full day of teaching, feeling paralyzed by the tsunami of paperwork my special education teaching role requires.

“When I am bestride him, I soar; I am a hawk; he trots the air.”. When six-year-old Kayla (not her real name) rushes up to kiss Butterball on the nose, she isn’t thinking about the fact that he was selected because he is an unusually gentle horse. Once she is happily in the saddle, she isn’t aware that she is improving her core strength. As she chats away to her instructor, Kayla doesn’t notice that she is producing words more easily than at other times. During the time that she spends at her therapeutic riding lesson, Kayla’s disabilities can fade into the background. When she is riding, Kayla is first and foremost a child enjoying a bond with a horse.

Road names point to the Cape Fear region's plantation past