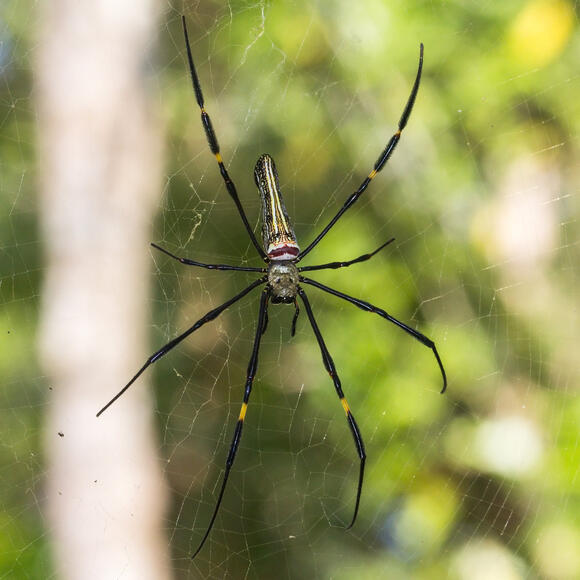 (Denver, CO) Just in time for spooky season, you can walk through an enclosed exhibit with free-roaming, orb-weaving spiders known as the Spider Dome at the Butterfly Pavilion.

Some of the spiders from Malaysia are as big as an adult human hand.

The Spiders Around the World exhibition runs from October 7-31 and features spiders from 20 countries, including the Skeleton Tarantula and the Pumpkin Patch Tarantula. There will also be a Gooty Sapphire Ornamental Tarantula and the Cobalt Blue Tarantula.

Butterfly Pavilion hopes “to inspire guests to view invertebrates with curiosity and wonder, and not fear while learning about their critical contributions to our ecosystem,” according to a press release.

While spiders are often seen as creepy or downright scary, Butterfly Pavilion wants to show how beneficial spiders are to the ecological system. They serve a significant role in keeping mosquitoes, flies and fleas in check, and they keep those nuisances out of homes, yards and gardens. They’ve even inspired engineering innovations.

For example, silk spiders provided the ideas behind bullet-proof clothing, parachutes and nets.

The Butterfly Pavilion goes beyond just displaying spiders and has worked in conservation efforts around the world since 2010. Events such as Spiders Around the World help support those efforts.

One spider in particular, the tarantula, is not only an iconic creature for the Butterfly Pavilion, thanks to Rosie the Tarantula, but is one area of conservation focus.

Tarantulas are a diverse group of arachnids in the family Theraphosidae. They’re commonly kept in human care in zoos, nature centers and by hobbyists.

Several tarantula species are threatened due to habitat destruction and exploitation for the pet trade -- these creatures need support to survive.

The Butterfly Pavilion, along with Colorado State University and the Southern Plains Land Trust, started a study in 2021 focused on how Oklahoma Brown Tarantulas, which live in southeastern Colorado, choose burrow sites.