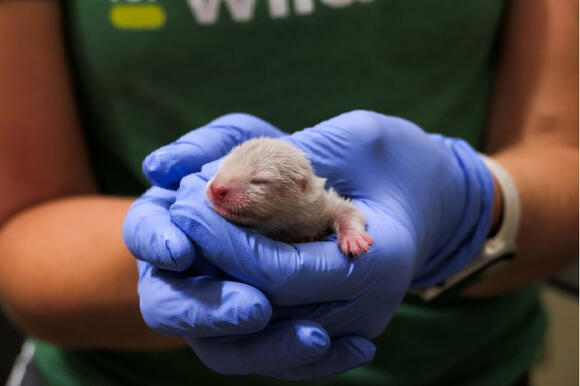 The little otter, born weighing about 59g, is a member of the smallest otter species. According to The Denver Zoo, in an email interview, they use their paws more than their mouths to investigate objects or catch food.

The species tend to live in family groups, which means multiple litters of pups will live together with the parents and future offspring.

The new baby otter will stay with his parents for the first few weeks of development. His dad, Pitar, brings the baby shrimp, although the baby can’t eat them just yet.

As the baby gets older, his eyes will open, his teeth will come in, he’ll become more mobile and start eating solid foods. He’ll also learn to swim, and then he’ll make his way into the exhibit with his parents, which could be two or more months away.

The plan is for the new otter to stay at the Denver Zoo for the foreseeable future, but when he gets older he may be recommended by the Species Survival Plan to move to another facility and start his own family.

The Species Survival Plans are cooperative management plans for almost every species at zoos accredited by the Association of Zoos and Aquariums. The program ensures that animals at zoos are healthy and genetically diverse.

Ten days after birth, the new baby weighed a whopping 166g, but he still fits in a human hand.

He is his parents’ first successful offspring. He’s the third generation of otters on his mom’s side to live in the Denver Zoo exhibit. People who have visited the Denver Zoo may have seen the baby otter’s grandparents and mom when she was a baby.