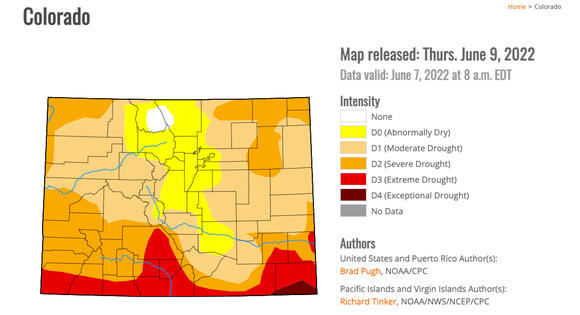 (Denver, CO) Denver and most of the Front Range are getting a little reprieve from drought conditions after a few rainstorms pulled the area out of moderate drought.

Since April, moderate drought conditions persisted in the metro area. The Memorial Day weekend’s rain brought relief to the area, but it could evaporate quickly, said Evan Direnzo, a meteorologist with the National Weather Service in Boulder.

“It doesn't really take much to go up or down a drought category,” he said. “We got a couple of nice rain falls. You don't want a bunch of rain dumped really fast, you want a couple little systems to keep following each other and bring a nice light to moderate rainfall so it has time to soak in.”

Now the area is considered “abnormally dry,” a precursor to drought.

In this category, which is called D0 by the U.S. Drought Monitor, hay production decreases and irrigation begins sooner, but in the next category, D1, rangeland growth is stunted and wildfires increase.

The forecast for this weekend calls for mid-to-upper-90s and clear skies, conditions that could make drought in the area return if they last. There’s little chance for precipitation in the coming week.

“I think for people especially going into summer mainly it's keep an eye on those fire bans. If you're going up into the Foothills or mountains, and you're going to camp or something, then heat safety is going to be big,” Direnzo said.

“We got a little reprieve from the drought conditions, but I would not be at all surprised if that turned on its head in the next couple of weeks or month or so.”