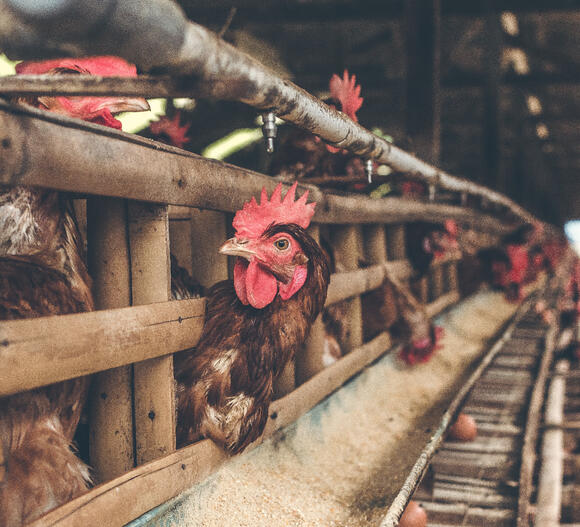 Hens in a cage.Artem Beliaikin / Pexels

The Pitkin chickens were euthanized, and the area quarantined to limit the flu’s spread. So far, about 24 million birds in the U.S. have died of the virus or killed to prevent its spread.

Because the flu is typically transmitted to zoos, pets and commercial flocks by wild birds, the Denver Zoo brought its birds indoors to protect them.

“Out of an abundance of caution, we brought our birds in because a lot of ours are exotic birds and we're not exactly sure how they would or would not handle avian flu,” said Brian Aucone, senior vice president for life sciences at the Denver Zoo.

“There's not a lot of data on them relative to it because mostly how you track it is finding dead birds and then testing for it. And once you know that it has avian flu, you know that particular species is susceptible to it. So we don't, obviously, want to do that.”

So far the flu does not pose a risk to humans, but that could change. Bird flu cases have jumped into humans in the past, and so have other animal flus, including swine flu, or H1N1, in 2009 that infected 60 million people in the U.S.

The CDC recommends people stay away from wild birds, whether they appear to be sick or not, and avoid handling a chicken or other birds that appear ill or have died. The agency believes "the risk to the general public's health from current H5N1 bird flu viruses is low."

The flu is especially devastating to poultry, including chickens and turkeys. Farmers have had to cull their flocks, increasing the prices of eggs and poultry.

This outbreak is the largest since the bird flu that struck in 2014 and 2015, which resulted in the deaths of more than 50 million birds and cost the agricultural industry billions of dollars. The most significant number of cases in 2015 occurred in April, which has officials worried about what’s to come.

If you have chickens or pet birds, Aucone advised they be protected.

“If you have pet chickens in such a home, you should take precautions as well to try and limit those birds' contact with wild birds,” he said. “Or if you have pet birds as well, parrots and those sorts of things, you wanna be careful with them and ideally if you can keep them inside, that's the best source of protection.”

How to protect flocks from avian flu: