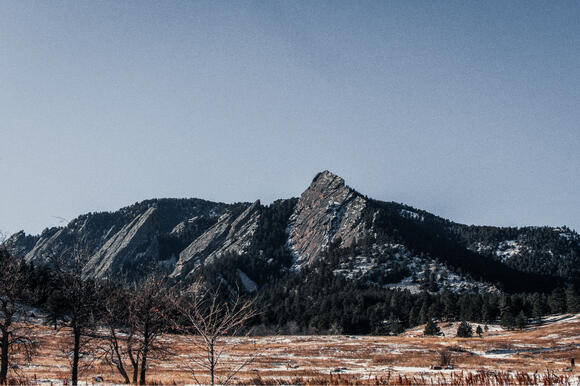 The Flatirons Mountains from Chautauqua Park, in Boulder, Colorado.Photo by Harrison Fitts / Pexels

(Denver, Colo.) The Colorado Geographic Naming Advisory Board plans to rename more than two dozen sites to remove the derogatory word “squaw” from their names.

“It's a very parallel term. It's slander, it's dehumanizing and it's very inappropriate to refer to a woman as that. It comes with a lot of negative stereotypes and connotations. And so it's definitely long overdue to get rid of that term.”

The word has historically been used as an offensive ethnic, racial and sexist slur, particularly for Indigenous women, according to the U.S. Department of the Interior. Currently, more than 650 federal land units contain the term.

"Racist terms have no place in our vernacular or on our federal lands. Our nation’s lands and waters should be places to celebrate the outdoors and our shared cultural heritage – not to perpetuate the legacies of oppression,” Haaland said in a statement. “Today’s actions will accelerate an important process to reconcile derogatory place names and mark a significant step in honoring the ancestors who have stewarded our lands since time immemorial.”

The Colorado board is under a tight deadline to respond to the federal task force. According to High Country News, state officials in Washington have found the federal process rushed. Officials there and in Colorado want to find new names that are appropriate and unique to the features.

“A lot of these are landmarks or mountains or rivers, etcetera. And those are all in many cases, sacred sites and sacred lands to different tribes that were once stewards of those areas,” said SeeWalker, who is Húŋkpapȟa Lakȟóta and citizen of the Standing Rock Sioux Tribe in North Dakota. “I think it's very important to consult with tribes or consult with the original peoples that were part of those areas because they may already have a name for it.”

The board met Sunday to review suggestions from the public and Tribal Nations.

For example, in Weld County, Squaw Rock got three suggested names, including Earthlodge Rock which came from Matt Reed, the tribal historic officer for the Pawnee Nation. That name was adopted quickly, while Squaw Fingers, a rock in Mesa County, didn't get any suggested names from the public. So the board decided to go with Ute Canyon, a name picked by the federal task force.

Gov. Jared Polis, who created Colorado’s task force, has final say on the board’s decisions. The board faced some controversy over renaming, including last fall, when Polis argued a recommended name for a mountain in Clear Creek County, Mestaa’ėhehe (pronounced mess-taw-HAY), was too hard to pronounce as written.

After Polis’ approval, the state will submit the recommendations to the federal task force.

Next month, the board takes the final steps of changing the name of Mount Evans, one of its most controversial tasks. The commissioners in Clear Creek County signed off on Mount Blue Sky, a historic name suggested by the Northern Arapaho and Cheyenne tribes.

“There's a whole community of people that this affects directly,” SeeWalker said. “[Those names] perpetuate microaggressions, stereotypes and it just continues the cycle of generational harm.”